The emeritus queen of Spain, Sofía, held a prominent place among the authorities from twenty countries who attended the funeral of emeritus pope Benedict XVI on Thursday in St. 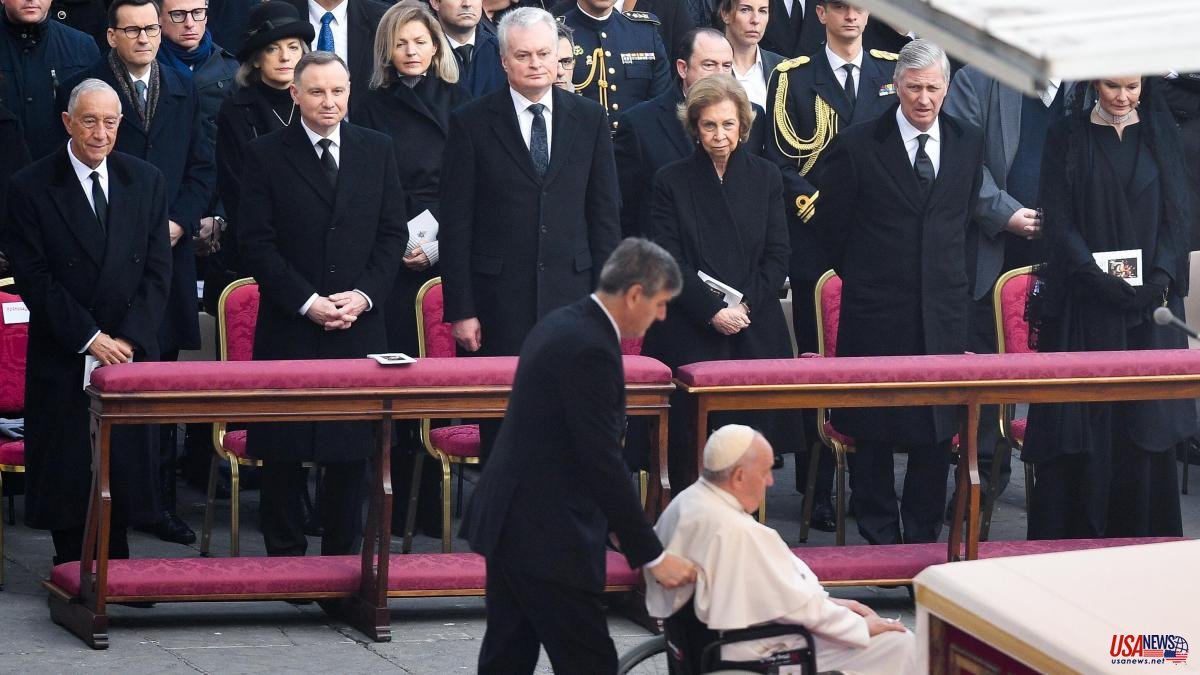 The emeritus queen of Spain, Sofía, held a prominent place among the authorities from twenty countries who attended the funeral of emeritus pope Benedict XVI on Thursday in St. Peter's Square in the Vatican. The monarch was seated in the front row to one side of the altar at the foot of the basilica, rigorously dressed in mourning and accompanied by Kings Felipe and Matilde of Belgium, the Portuguese president, Marcelo Rebelo de Sousa, the Polish president, Andrzej Duda and the Lithuanian Gitanas Nauseda, as well as the main Italian authorities and the President of Germany.

As it is not a state funeral, the only delegations that were officially invited are those of Germany, Ratzinger's native country, headed by its president, Frank-Walter Steinmeier; and that of Italy, his host country. The other delegations attended in their personal capacity, such as that of Spain which, led by Sofía, has occupied the fourth position on the guest list, behind the heads of state of Germany, Italy and Belgium.

Queen Sofía could be seen talking with King Felipe of Belgium and affectionately greeting Portuguese President De Sousa, before the start of the mass, during the recitation of the rosary.

The Italian president, Sergio Mattarella, and a large part of the right-wing government, led by the prime minister, Giorgia Meloni, as well as his predecessor in office and former president of the European Central Bank, Mario Draghi, also attended.

Also coming from Spain were the Minister of the Presidency, Félix Bolaños, the President of the Spanish Episcopal Conference (CEE), Juan José Omella; and the ambassador to the Holy See, Isabel Celáa. Bolaños, who reiterated the condolences of Queen Sofía and the Spanish delegation, also praised the figure of the pope emeritus for his intellectual vocation and for being an example of "generosity" and "courage" when he resigned from his pontificate.

In statements sent to the media before participating in the funeral, Bolaños highlighted the "deep commitment" that Benedict XVI had with the Catholic faith and his "absolute dedication" to the Church when he served as pope "with humility" for eight years.

"The same commitment that made him renounce the pontificate when he felt that he no longer had the strength to continue with his mission. It was a courageous, generous, unusual decision in 600 years and carried out with discretion", the Minister of the Presidency stressed after adding that the Spanish government will continue to work with the Catholic Church to find "spaces of understanding" and agreements that seek the general interest.

Among the attendees were also the President of Slovenia, Natasa Pirc Musar; that of Togo, Faure Essozinma Gnassingbe, or that of Hungary, Katalin Novak (Prime Minister Viktor Orban passed through the funeral chapel on Tuesday). There were also some ministers, in addition to Leyva Durán, such as the French Interior Minister, Gérald Darmanin, and the United Kingdom Secretary of State for Education, Gillian Keegan.

As a curiosity, Taiwan and Kosovo were also represented by former Vice President Chien Jen Chen and Deputy Prime Minister Donika Gërvalla-Schwarz, respectively. Both States have limited recognition among the international community.

Naturally the Roman Curia was represented with the presence of 130 cardinals, headed by Pope Francis in a wheelchair, who presided over the funeral but did not officiate it, a task the latter entrusted to the cardinal Giovanni Battista Re.

It also had the representation of 50 Christian denominations and the Russian Orthodox Patriarchate was represented, with Metropolitan Antonij di Volokolamsk, as well as the Jewish community of Rome and the Italian Islamic Religious Community (COREIS), with its vice president Yahya Pallavicini; among about thirty other religions.