It's not chemistry, it's calculus. 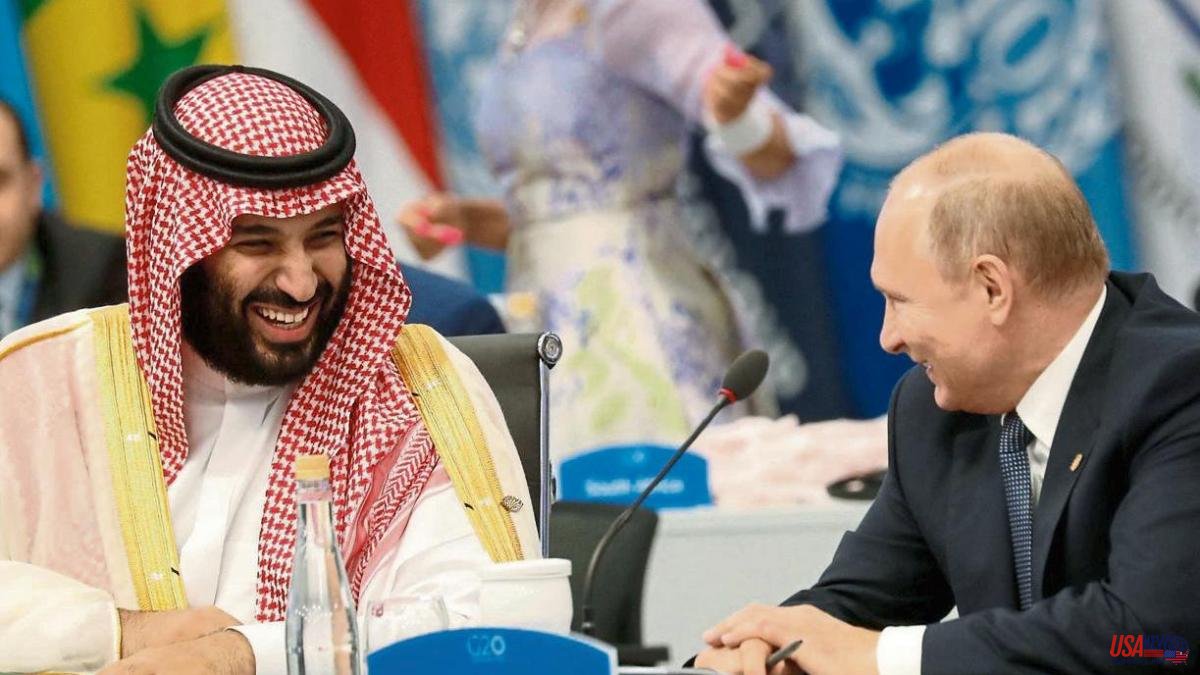 It's not chemistry, it's calculus. Mohamed bin Salman and Vladimir Putin, who have in their hands the OPEC tap, with 40% of its exports, have decided to reverse the decline in oil prices. They have done so as temperatures drop and concerns grow about the energy bill in the northern hemisphere. Some speak of stabbing. Others clarify: the alignment of Saudi Arabia and Russia is punctual and sectoral. But increasingly frequent, which is of great concern in Washington and Brussels.

In any case, from November 1, there will be two million fewer barrels per day of crude oil on the market – 2% of the total – in order to keep it around 100 dollars. The decision announced last week in Vienna is a jug of cold water, less because of the effect itself – which is already being felt – than because of the indication that the Organization of the Petroleum Exporting Countries (OPEC) is going to continue putting its own interests.

The decision has been made within the scope of OPEC, a format that includes a dozen producing countries, but not members, such as Russia or Mexico. To make matters worse, Russian Deputy Prime Minister Alexander Novak, sanctioned by several NATO countries, was among the signatories of the agreement, Wednesday in Austria.

Over the last few months, the US has played hard to force down the price of crude oil, putting into circulation no less than 190 million barrels of its strategic reserves, a quarter of the total, until leaving them in their lowest level since 1984. It seems clear that new measures in this sense could be replicated with new countermeasures by OPEC.

This is not the only source of resentment in OPEC's Arab core. Producer countries such as Iraq, Libya and, to a lesser extent, Syria, have been disarmed in the last two decades by the United States, the United Kingdom and their allies. In the case of Syria, it is true that with the initial enthusiasm of Saudi Arabia, which has also added the war in Yemen of its own harvest. The fiasco of the latter, together with that of Iraq and Libya, has only increased the influence of the Islamic Republic of Iran in the Arab world, to the chagrin of Riyadh.

In any case, it became clear last week that Washington can no longer take the Arabian Peninsula for granted, 77 years after the meeting on the USS Quincy cruise ship in the Suez Canal, in which King Abdelaziz and President Roosevelt sealed a transcendental agreement to protect the Saud family in exchange for guaranteeing the flow of crude oil (and weapons).

The American emissaries of recent days have been of no use and Joe Biden's visit to Yida in August was of little use, in which it was agreed that he would not shake hands with Mohamed bin Salman, but rather they would bump their fists, with a jovial forced. A few months earlier, Biden had promised that he would make a pariah of the prince who, according to the CIA, had to be behind the dismemberment in Istanbul of The Washington Post columnist, close to the Muslim Brotherhood, Jamal Khashoggi.

Russia, where this brotherhood is prohibited, does not have this type of problem with Arabia, the Emirates or Egypt, where it is viciously persecuted. The Arab springs encouraged by Barak Obama, with the Muslim Brotherhood as the most organized vector, infuriated the regimes in the region, all of them autocratic. The tables began to turn in late 2015, when Russia's military intervention in Syria on behalf of its ally, Bashar al-Assad, changed the course of the war and shocked its neighbors. A year later, OPEC was created, with Russian participation. And in 2017, for the first time in history, a Saudi king – Salman – visited Russia. Months earlier, his son Mohamed had done so, meeting with President Putin.

That 2017 another momentous thing happened. Mohamed bin Salman staged a palace coup to become crown prince, displacing his cousin Mohamed bin Nayef – the son of his 37-year interior minister – and purging his other rivals. A move that made the crown hereditary, then less subject to intrigue, after having passed from one cousin to another for half a century. And something that the CIA has not yet forgiven him, unlike, visibly, former President Donald Trump.

The next lurch in the direction of Moscow was prompted precisely by the international condemnation of the Khashoggi case. While Western leaders avoided Mohamed bin Salman, like a sick man, former KGB agent Vladimir Putin – also accused of poisoning dissidents – high-fived the prince in the most effusive way possible, on an official visit.

Bin Salman, elevated to prime minister two weeks ago - a formality, given the king's illness - can no longer be avoided by his counterparts. However, Saudi Arabia has not made a 180-degree turn. It remains by far the largest customer of US weapons. What it has ceased to be is a bulwark against Russia, as it had been against the USSR. Mohamed bin Salman has not married Putin. But with hundreds of cousins ​​on the prowl, he has his back, as evidenced by the fact that two of his brothers occupy the key ministries of Energy and Defense.

To give an example, the thaw in the military relationship with Moscow has not gone beyond the symbolic. But economically, they have discovered that they are on the same side as oil-exporting countries, which are suspicious of the green crusade of recent years in favor of an accelerated energy transition.

During the years in which the girl Greta Thunberg –now disappeared– was kept in the limelight, billions of euros were not invested in the exploration of deposits. We are now paying the consequences – literally – for the perfect storm derived from Western retaliation for the Russian invasion of Ukraine.

In any case, OPEC sources deplore that the defense of their own interests can be seen as alignment on one side or the other, in a war that is not theirs. They recall that, before their decision, the price of a barrel of oil had been declining for several weeks and was about to go back to 80 dollars, its level of a year ago.

In case OPEC needed a nail, the European Union gave it hours before its conclave, expressing its support for the US proposal to put a cap on the price of Russian oil. Although its application raises doubts and it is Russia who is in the spotlight, OPEC considers it a terrible precedent. However, they formally hide their decision in its “preventive” nature, to prevent the price from collapsing, in the event of further declines in demand, as a result of possible restrictions due to the pandemic in China or the closure of factories in Europe.