Messi raised his voice: "God brought the cup here so that we could raise it in Maracana"

They said that Messi did not exist. 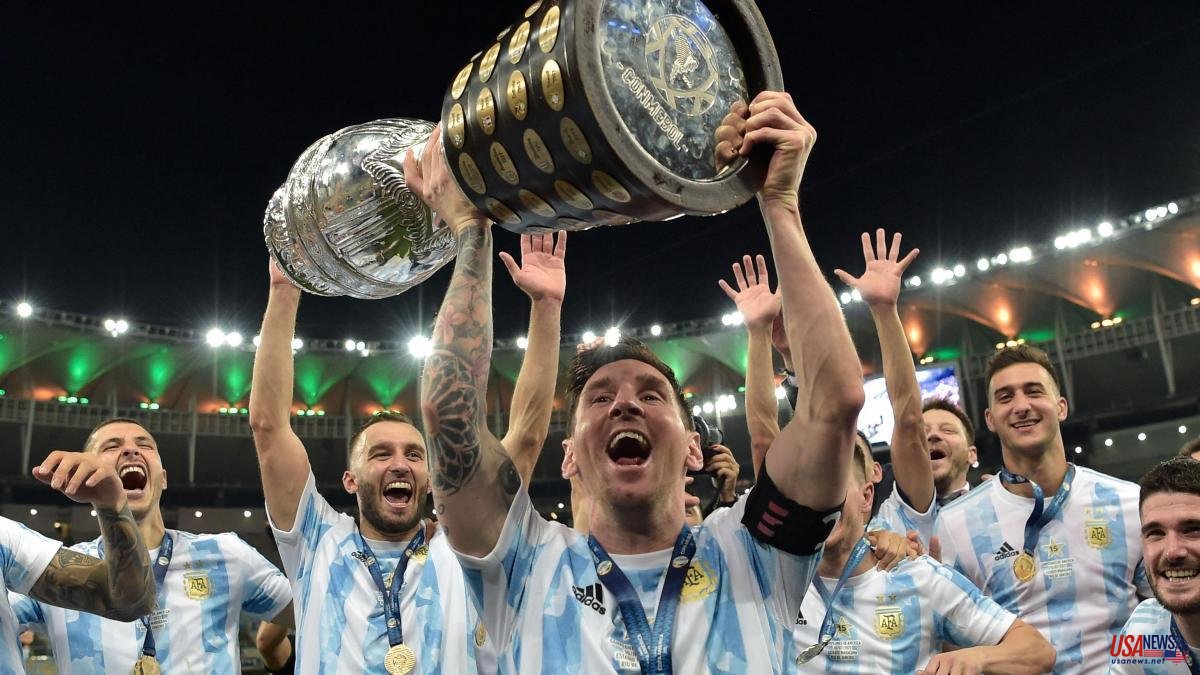 They said that Messi did not exist. There was a time they called him cold chest. The most daring dared to say that he did not feel the colors. Others cataloged his leadership as silent. They ventured that the comparison with Maradona was impossible, that he would never have Diego's charisma to drag the masses. That he didn't need the glibness and the gift of words either, because he spoke in the field, on the grass, every week. That he was not capable of carrying the team behind his back and thus the short and intensive selection tournaments could not be won.

Lie. They all lied. Due to ignorance, bad faith or simplicity in their analysis. No one knew what he was actually capable of in a locker room.

Until someone decided to make a docuseries of Argentina's path in the last Copa América. It's titled Be Eternal: America's Champions and it premieres today on Netflix. A camera got into the Maracana visiting dressing room before the final on July 11, 2021 and the prophet appeared there.

The unknown was revealed, the unprecedented. She was seen in the sauce of it. He established himself as a leader whom his apostles listened to, respected and followed thanks to a powerful speech, nothing imposed. One minute and seven seconds was enough for him. He spoke of the repercussion of the South American classic, he focused on the strength of the group, he thanked without demanding, he struck a chord by highlighting the personal sacrifices made, he remembered the fans, he gave an almost divine touch to his company, he promised glory to his companions and gave them peace of mind and confidence.

“We already know what Argentina is and what Brazil is. I don't want to say any of this today. Today I want to thank you guys for these 45 days. I said it on my birthday [it's June 24]: a beautiful group was put together and I really enjoyed it, ”he began by saying. “It's been 45 days where we don't complain about the trips, the food, the hotels, the courts... You're welcome. 45 days without seeing our families. El Dibu (Emiliano Martínez, the starting goalkeeper) was the father and he could not see the daughter yet. El Chino (Lucas Martínez Quarta, Fiorentina defender) was the same: he was able to see it for a little while and nothing more”, he recalled, before asking himself: “And why all? At this moment. Because we had a goal and we are one step away from achieving it. You know what the best of all is? That it depends on us to achieve it. For this reason, now we are going to go out, we are going to raise the cup and we are going to take it to Argentina to enjoy with our families, our friends and the people who always supported Argentina”.

To end with the final harangue. “Finally, and with this I end, there are no such thing as coincidences, guys. You know what? This Cup (America) had to be played in Argentina and God brought it here. He brought it so that we can raise it up in Maracana, to make it more beautiful for everyone. So let's go out confident and calm, we're going to take this one home." That last idea caused the general howl.

Later on the field, in a Maracanã empty due to covid, Argentina beat Brazil 1-0 with a goal from Di María. "That day Leo's chain came loose," says the winger, who gets emotional.

Over the years Leo Messi forged a personality based on “chestnuts”, as his friend Xavi Hernández would say. Each disappointment with the albiceleste affected him and left a residue. Even in 2016, the ten decided to give himself some time to reflect after losing three consecutive finals (2014 World Cup, 2015 Copa América and 2016 Centenario Cup). All those disappointments led to those words and finally gave meaning to Messi's career with Argentina. “I always had in my head why. Why was it not given to me? Why not one of the ones we had, at least? He had hit me and got back up. I had fallen again. And so and everything I had in mind that it was going to happen to me, ”reflects the ten, who is now aiming for the World Cup in Qatar. Can you imagine the speech at the Lusail stadium on December 18? Because Messi is no longer silent.