Macron asks in a dramatic tone

Emmanuel Macron surprised France on Tuesday with a speech to the country from the runway at Orly airport, before flying to Romania and a probable visit to Ukraine, in which he has asked to have "a solid majority" in the National Assembly . 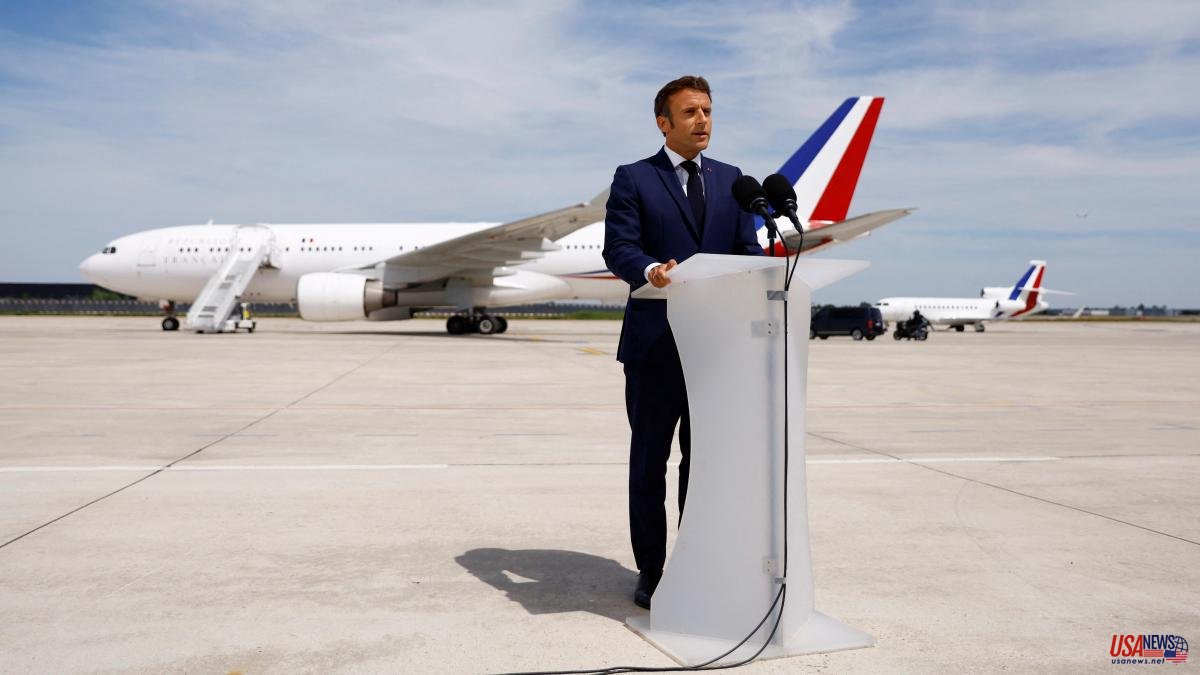 Emmanuel Macron surprised France on Tuesday with a speech to the country from the runway at Orly airport, before flying to Romania and a probable visit to Ukraine, in which he has asked to have "a solid majority" in the National Assembly . The call to vote for the coalition of parties that supports him -although without mentioning it by name- in the second round of the legislative elections this Sunday has had a dramatic tone, alerting the French that order is at stake internal and international.

Macron's coup is unprecedented and shows the great concern in the Elysee at the possibility of losing the absolute majority in the Assembly and living five years of instability. The president has spoken in front of the official Airbus that he should take it to Bucharest. During the televised broadcast, the rumor of the reactors already running was heard. It was a scene very well prepared by his communication team, who gave the press short notice.

Macron recalled his efforts to prevent war and his solidarity with Ukraine. He explained that he will visit the French troops deployed in Romania to protect that delicate flank of NATO in the Black Sea, and that he will also travel to neighboring Moldova. But he immediately made a link between "difficult times" in Europe and the French parliamentary elections on Sunday. According to him, the French have in their hands "an option more crucial than ever."

"Since the best interest of the nation is at stake, I want to convince you to give the country a solid majority this Sunday," he said. "Nothing would be worse than adding French disorder to the world disorder," he added.

Without mentioning the great rival in the second round, the left-wing coalition led by Jean-Luc Mélenchon, the reference was clear when the head of state underlined the need to guarantee independence from France. That independence will not be achieved with more taxes or with more debt or with economic decline. He promised to lower tax pressure and reduce debt.

"Neither abstention nor confusion, but clarification." That was Macron's slogan to convince of the need to go to the polls, after a record abstention of 52.4% was registered in the first round.

The speech at the airport caused perplexity. The audacity of Macron's communication team has no limits, although it remains to be seen if this time it will have the desired effect. The electoral instrumentalization of an international trip of this nature, in the midst of war, will generate criticism. A commentator from the public channel LCI ironically said that the brief speech will now go down in history as "the Orly appeal", implying that Macron has tried to imitate, saving the distances, the famous radio speech by De Gaulle, from the microphones of the BBC, in London, when France had been invaded by Nazi troops.

It is not yet confirmed whether, after visiting Romania and Moldova, Macron will travel to Ukraine on Thursday, accompanied by German Chancellor Olaf Scholz and Italian Prime Minister Mario Draghi. Everything indicates that the trip will take place. Probably, for security reasons, you want to leave the logistical details nebulous. In principle, the destination would be Kyiv, although a surprise is not ruled out and that the chosen city will finally be Odessa, much closer to Moldova.