Laporta: "The salary reduction has been substantial but insufficient"

101 senators from FC Barcelona filled the Auditori 1899 of the Camp Nou to listen to the explanations of the president Joan Laporta who launched a first message about what the club's compromising members will vote in the extraordinary assembly on June 16. 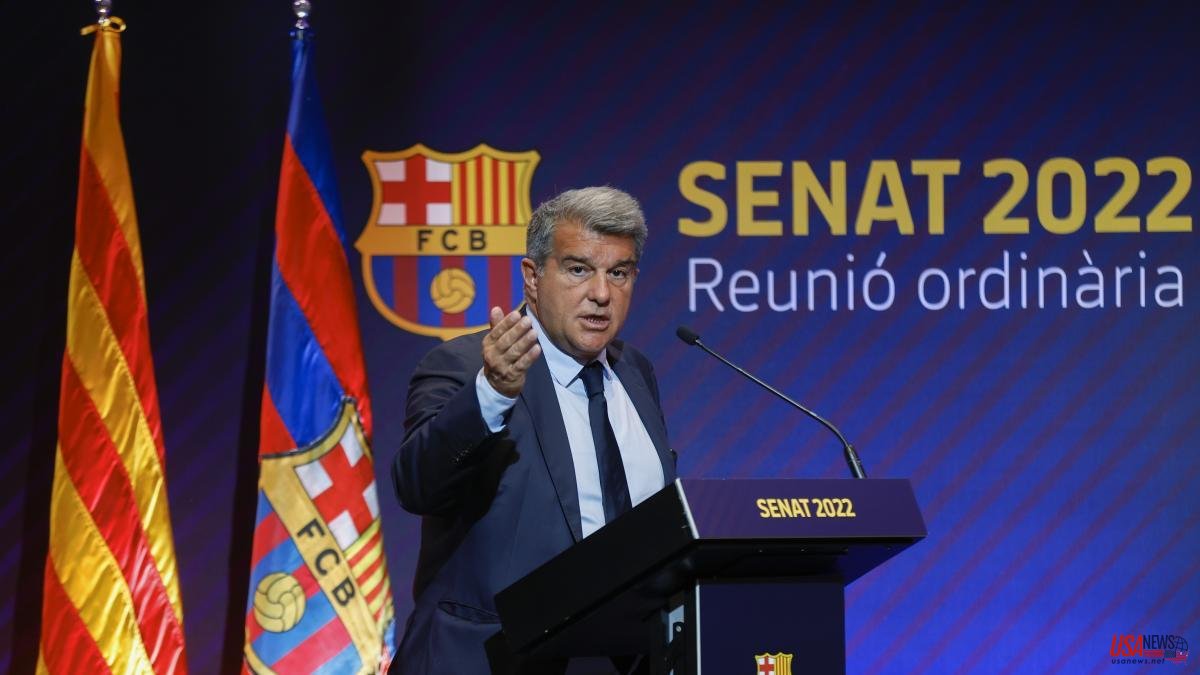 101 senators from FC Barcelona filled the Auditori 1899 of the Camp Nou to listen to the explanations of the president Joan Laporta who launched a first message about what the club's compromising members will vote in the extraordinary assembly on June 16.

The president used a clinical simile to explain the financial situation of the club and launch a new message to the first football squad, from whom he will individually request another salary adjustment (the fourth). “When we took office on March 17, 2021, the club was clinically dead. Salaries could not be paid. We had a sword of Damocles on us. But we looked for discreet solutions so as not to generate false expectations, restructure the debt, control expenses and reduce sports payroll substantially, although not enough to generate more income. We have also obtained new sponsorships such as Spotify and we will soon see the result”, said the president.

Currently, continuing with the clinical simile, the president pointed out that “Barça is already in the ICU after several cures. In this situation, any company would ask its partners for a spill. But we won't do that. Because you are not responsible for what has happened or for the club's mismanagement," Laporta said. For this reason, the president insisted on the need to activate "the famous levers" related to the sale of up to 49.9 percent of BLM and (merchandising of the club) and also the transfer of up to 25 percent of television rights. . “They will serve as a cure to get out of the hospital and begin to lead a normal life. They will serve so that we can invest in professional teams to compete with state clubs. We want a strong Barça. This will happen if they give us their trust," said Laporta, who insisted several times that "this does not alter the ownership model of the club, which will continue to belong to the members while I am president."

The economic vice president Eduard Romeu entered the scene to explain the two levers that will be put to the vote next week. From BLM he explained that it will not be closed before June 30 because “there are offers for 200 million euros but we believe that we are capable of achieving a higher figure. When you're weak, everyone wants to take advantage of you. What we want is to buy time, put BLM in competition and choose the best travel companion," he noted.

He has also made reference to the club's television rights, the lever that will more than likely be activated before June 30. Romeu has explained the reason why they request permission to cede up to 25 percent of the rights and not a higher percentage. "It is a correct figure to give consistency to the coming years. With a higher figure we would put the coming years at risk. If it were, for example, 40 million, we are sure to recover it with other income. It is about not mortgaging the future".

The vice president ended his speech by recalling that in the first assembly “I asked for two years of patience and five to resolve the financial situation of the club” and that he stressed that the activation of the two economic operations “is not bread for today or hunger for tomorrow. We must solve today but without mortgaging the future. Work so that the operating accounts continue to rise. Important work has been done with the wage bill, which has not been enough because it was very high”, insisted Romeu along the same lines as the president.