La Real fights one on one against Barça, but remains at the gates of giving the bell

Jonatan Giráldez promised "one of the best games of the season" against Real Sociedad and he did not disappoint. 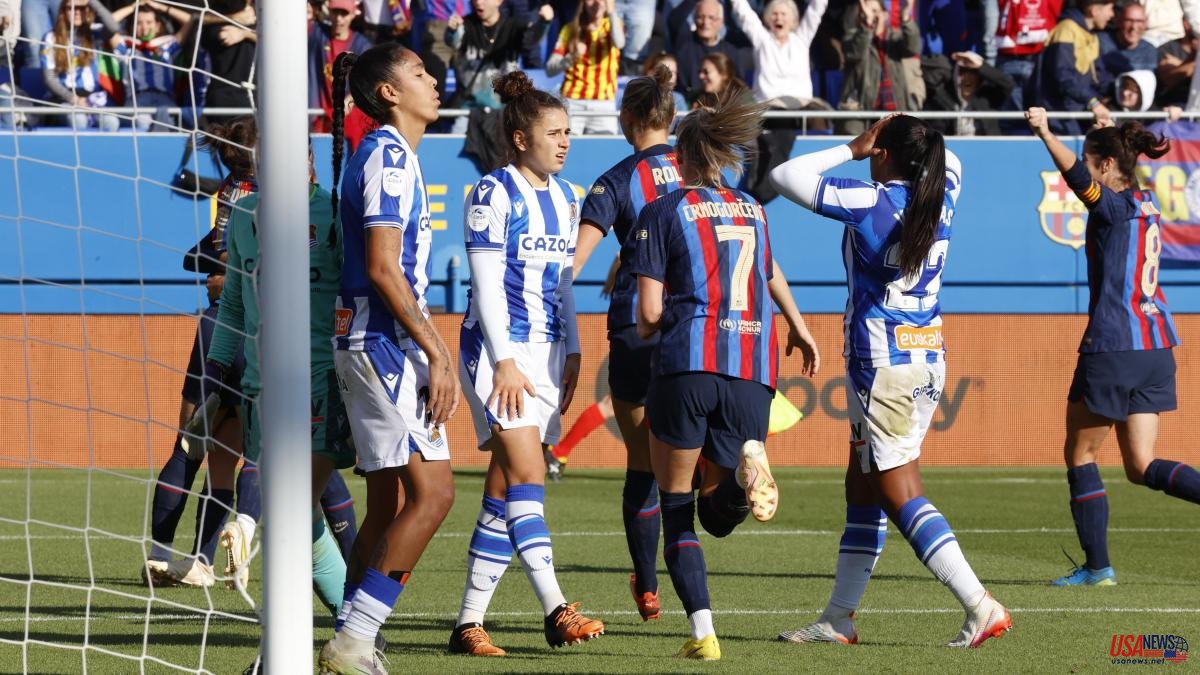 Jonatan Giráldez promised "one of the best games of the season" against Real Sociedad and he did not disappoint. The txuri-urdin team was about to give the bell in the penultimate game of the year at the Johan Cruyff thanks to a goal from Le Guilly before the break. It was the first time this season that Barça was behind on the scoreboard, but Torrejón would not take long to equalize after a quarter of an hour to start the second half. Lucy Bronze finished off the comeback with a header in the last minute of the game and allowed Barça to remain undefeated in the F League and with a Johan Cruyff impregnable up to now.

Natalia Arroyo showed how well she knows the Barça team and set out a demanding game for Giráldez, surely the most difficult of the season for the leader. The txuri-urdin team put Barça in trouble, both in their pressure when leaving the ball, and in their quick attacks. No one had managed to force the defending champions as many times as the Basques did. They spoke to the giant that is Barcelona and showed that they have also taken a step forward compared to last year, when with the same approach they ended up being thrashed. This time, Real continued to fight, physically resisted for 90 minutes and had a real chance of winning until the final whistle.

The Catalan coach put enormous pressure on the Barça block, who had trouble coming out from behind. Also in attack, it was one of the teams that forced the most chances against the leader, especially from a quick Jensen. But the txuri-urdin team was not only good in attack, in defense Vanegas gave a master class avoiding any approach from Barça and, when the former Espanyol player was not enough, Nanclares appeared to block the danger. If it weren't for the performance of these two key pieces in the Real, the script could have been very different. And it is that Salma Paralluelo showed why she is called to be the great promise of the Barça future.

The forward was tireless looking for the goal from the first minute and accumulated arrivals that were frustrating one by one between Vanegas and Nanclares. The clearest of all, in the twentieth minute of the game, after inventing an incredible cut on the edge of the area and looking for the goal with a powerful shot that went just wide. After half an hour of play, they also had a double golden opportunity to put Barça ahead, but first Nanclares, and then Vanegas from the ground, managed to keep a dedicated Real Sociedad alive.

The txuri-urdin team had their chances, less clear, yes, in set pieces or trying to take advantage of the speed of the Norwegian Synne Jensen. Although it would be Franssi who would score the team's clearest opportunity in the 38th minute, when he faced Sandra Paños in a one-on-one match that the goalkeeper from Alicante would win. Paños held up perfectly to the txuri-urdin and stuck out his leg at just the right moment to cover the shot from the Finn. And when it seemed that the first half would end without incident on the scoreboard, Jade Le Guilly appeared. An unindicated foul on the Catalans in the midfield led to Real's counterattack, which mounted the attack very quickly until the ball ended up at the feet of the Frenchwoman, who crossed her shot to Paños's long post to score the 0- 1. The footballer on loan from PSG took credit for being the author of the goal that put Barça, for the first time all season, behind on the scoreboard.

Giráldez did not think twice and made four changes after passing through the locker room, including the surprising replacement of Paralluelo, the best of the first half, by Crnogorcevic, looking for a winger who would act with a natural foot. The Galician's notebook worked and on the first ball that the Swiss touched, she sent a very dangerous cross to Geyse who was about to score. The team continued looking for a tie until, fifteen minutes later, Torrejón worked the miracle. The Barça captain saw his first shot frustrated, but did not forgive when Nanclares was rejected, making it 1-1 in the face of protests from the Real players who claimed a possible offside for the Barça side.

The second half was a true football spectacle, with two teams focused on the fight for victory. Gaby responded to Torrejón's goal with a shot that skimmed the post, Geyse warned again with another ball that hit the crossbar... an exchange of blows between the leader and a Real that never stopped believing in their options. Natalia Arroyo's men took the familiar form of the Barça giant and were about to leave with the booty in an action that Mapi León miraculously saved on the very goal line in minute 80.

But Giráldez's team had no intention of giving up their first points of the season either. Nanclares came back with a prodigious hand to prevent Rolfö's goal, frustrating what seemed like the last chance for the Catalans to win. But then Lucy Bronze showed up. The Englishman rose above the rest of the world and headed the ball with rage sending it into the back of the net and giving the most worked victory of the year to a Barça that remains undefeated in the F League.