Kosovo finally knocks on the door of the European Union

Kosovo has dreamed of the European Union for years, and believes that the turn has come to knock on its door. 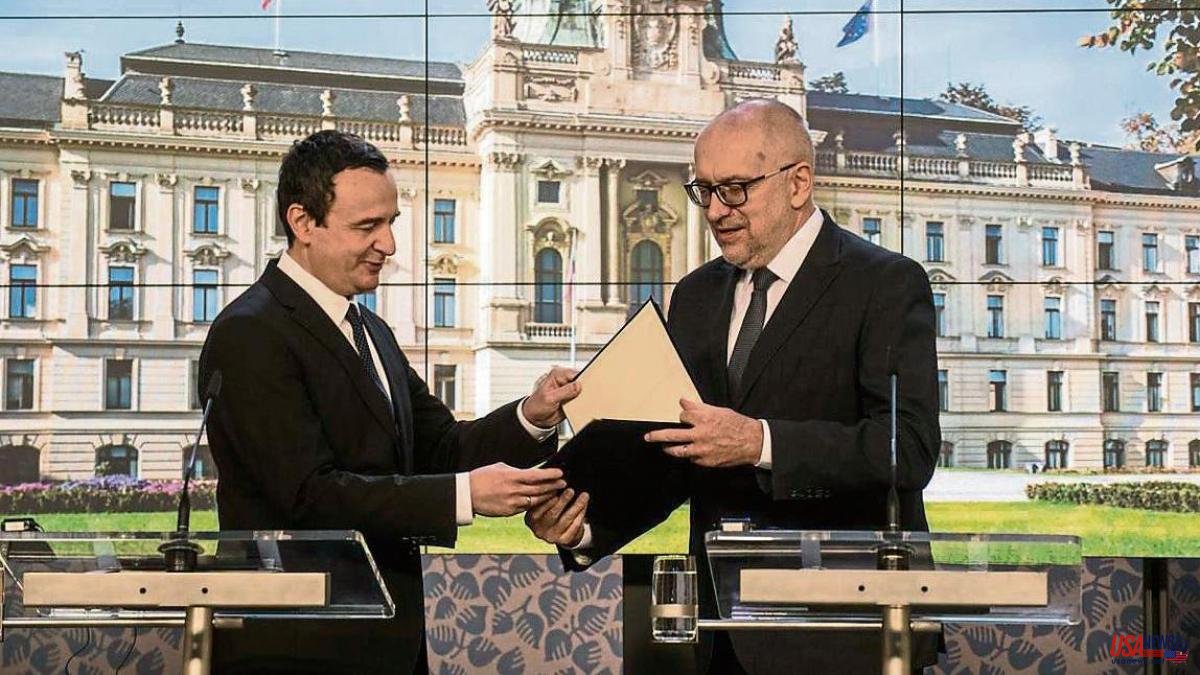 Kosovo has dreamed of the European Union for years, and believes that the turn has come to knock on its door. The country requested its formal entry yesterday to enter the community club. The former Serbian region formalized the petition in Prague, the capital of the country that currently holds the rotating presidency of the Council, amid tensions with Belgrade.

It's official. Fourteen years after Kosovo unilaterally gained independence from Serbia, the small country — not recognized by several states, one of them Spain — showed its intention to join the European club. Until now, it was the only one of the six countries that are part of the Western Balkans region that had not applied yet.

On Wednesday, the signing of the document was broadcast live from their Parliament, in Pristina, in which they marked "the historic day" for the country. The Kosovar president, Albin Kurti, traveled to Prague yesterday to present the official candidacy and hand-deliver the document to the Czech Minister for European Affairs, Mikulas Bek. “We do not want to enter through the small door, nor through an accelerated procedure. We want to build the EU with our country inside, with our people”, Kurti assured.

For his part, the Czech minister showed his support for the petition. “We are firmly convinced that a European future is the only way to solve the problems that the region has, be they economic, social or ethnic”, he defended.

Despite the fact that the enlargement process in the European Union has been practically frozen in recent years —the last country to join was Croatia almost a decade ago— the war in Ukraine has accelerated. The unquestionable Russian influence in the region awakened in the bloc the need to give hope to countries that are patiently waiting for the European dream.

But the process can be very long. Kosovo is not recognized in all countries. Five of the Twenty-seven - apart from Spain, neither Greece, Romania, Slovakia nor Cyprus - accept it. "Our position has not changed, we do not recognize the independence of Kosovo and the decision to admit a country as a candidate requires unanimity," recall Spanish government sources.

Kosovo has not even normalized relations with Serbia yet, although the European Union is working to find an agreement. The High Representative of the European Union for Foreign Policy, Josep Borrell, yesterday urged both parties to resume dialogue. "It's the only way," he defended.

However, the latent tensions, especially those of the last few weeks, have only complicated a normalization that is perceived as far away. The roadblocks in the north of the country by Kosovar Serbs, who are protesting against what they consider to be discrimination on the part of Pristina, has been the umpteenth crisis. Shortly before, just last month, she was preceded by a dispute over license plates that the head of European diplomacy managed to unblock in extremis.

Although the accession process has just begun for Kosovo, from 2024 its citizens will be able to travel to the countries of the Schengen area without the need for a visa, under an agreement reached this week by the European institutions, pending its ratification .

At the same time, the European leaders meeting in Brussels gave the final green light for Bosnia-Herzegovina to be the new candidate country to join the European Union, six years after submitting its application. “An important signal for the population, but also a clear expectation for the new authorities to undertake reforms. The future of the Western Balkans is in the EU”, assured the President of the European Council, Charles Michel, after the approval of the Heads of State and Government.

At the same meeting, the aid of 18,000 million euros to Ukraine was also ratified, after Poland cleared the reserves it maintained to approve the 15% tax on multinationals, with the aim that it could enter into force in 2023. Both legislations were also linked to the approval of the recovery plan for Hungary of 5,800 million euros and the freezing of 6,300 million euros of regional funds to Budapest for failing to comply with the rules on the rule of law, specifically, on corruption.

Likewise, the European Union managed to approve the ninth package of sanctions against Russia, which includes a ban on exporting drones to Moscow and third countries such as Iran, to prevent it from providing weapons of European origin. After several days of negotiations, a new exception has been achieved that allows previously sanctioned individuals or companies to pay, if this allows the transport of wheat and fertilizers, and avoids a greater famine, especially on the African continent.