Karra Elejalde: "Cooking is an act of generosity and a great responsibility"

Mikel (Enric Auquer) believes that he killed his father. 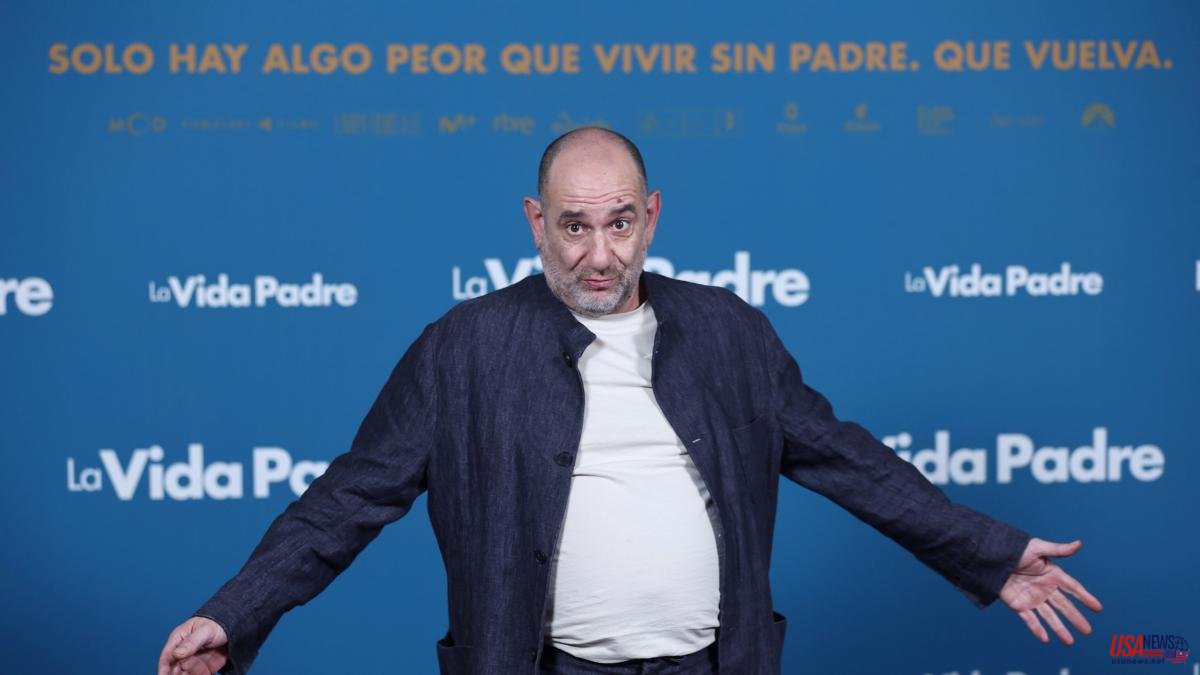 Mikel (Enric Auquer) believes that he killed his father. It was all because of some frogs. Juan (Karra Elejalde) had one of the most prestigious restaurants in Bilbao. One night in 1990 the King went to dinner. His son Mikel put those frogs in the dishes and the mischief ended in tragedy: Juan jumped into the estuary and disappeared. 30 years have passed. Mikel is now a prestigious avant-garde chef who has converted his aita's old restaurant and already has two Michelin stars. He goes for the third. The Kings, the new ones, have reserved a table for dinner on Friday. Everything goes smoothly until Juan reappears, amnesiac and quite mad.

As crazy is La vida padre, the new film by Joaquín Mazón, which was presented this morning in Bilbao. Written by Joaquín Oristrell, La vida padre fuses traditional cuisine with that of the latest generation, proposes a dialogue between the Bilbao of the 90s and that of the 21st century, addresses the ins and outs of family relationships and delves into more delicate issues such as loss memory After the presentation, Elejalde made time for La Vanguardia to talk about this new film that will hit theaters on September 16.

You lived in the Bilbao of the 90s. What differences are there with the current one?

I lived in Gipuzkoa until I was 14 years old, then in Vizcaya and, since I was 40 years old, I have been in Catalonia. So I got to know the Bilbao of the 90s very well. This film is a tribute to the city. It portrays that gray and industrial Bilbao, which had an indisputable charm, and also that of now, which is bright and touristy and can also make you fall in love. The transformation of the city was controversial, but I stayed with the two Bilbaos, the one from before and the one from now.

The film is also a tribute to gastronomy...

Yes, and it manages to marry its two aspects, the traditional and the new, since one would not exist without the other. I play Juan, an amnesiac chef in love with Bilbao and traditional cuisine, the steak. His son, Enric Auquer, with whom I have established a good friendship, has succeeded as an avant-garde chef, but at a certain point he needs his grandmother's recipes to move forward. It is not a struggle between two ways of cooking, but a meeting.

I have lived since I was a child surrounded by stoves. My parents had a restaurant and taught us how to cook. I dare not say that I cook well, but people like it. For me, it is not a game, it is an act of generosity and a responsibility. When I cook, I don't relax until they tell me it's good.

Do you have occasion to cook?

We have a txoko in Molins de Rei and I cook when I can between shoots. I confess that I have very good help, because I know many cooks. Once I made a wild boar and it was too strong so I called Karlos Arguiñano and he recommended that I put a couple of chestnuts and applesauce. I succeeded with that advice because the boar was rich, rich.

La vida padre is a very funny comedy. Do you hope to repeat the success of Eight Basque surnames?

Eight Basque Surnames was a sainete. There is a lot of drama here. My character is a man with amnesia. My mother is 93 years old and has lost her memory. She has served me to document myself. I have stolen many of her phrases to compose the character.

In addition to La vida padre, you are about to release another four films. Is Spanish cinema experiencing a good moment?

There is a pulse between platforms that has increased production. A lot of work is being done. But houses are not the ideal place to watch movies. Spain should have a law like the French one to defend our cinema, it is not about giving subsidies, but about ensuring that the films that enter the box office can be maintained so that Spanish projects have a greater and better run.