Israel says it is preparing to

The Israeli army announced on Saturday that it was preparing for "a week" of incursions into the Gaza Strip, where exchanges of fire with Palestinian Islamic Jihad have already killed more than a dozen Palestinians. 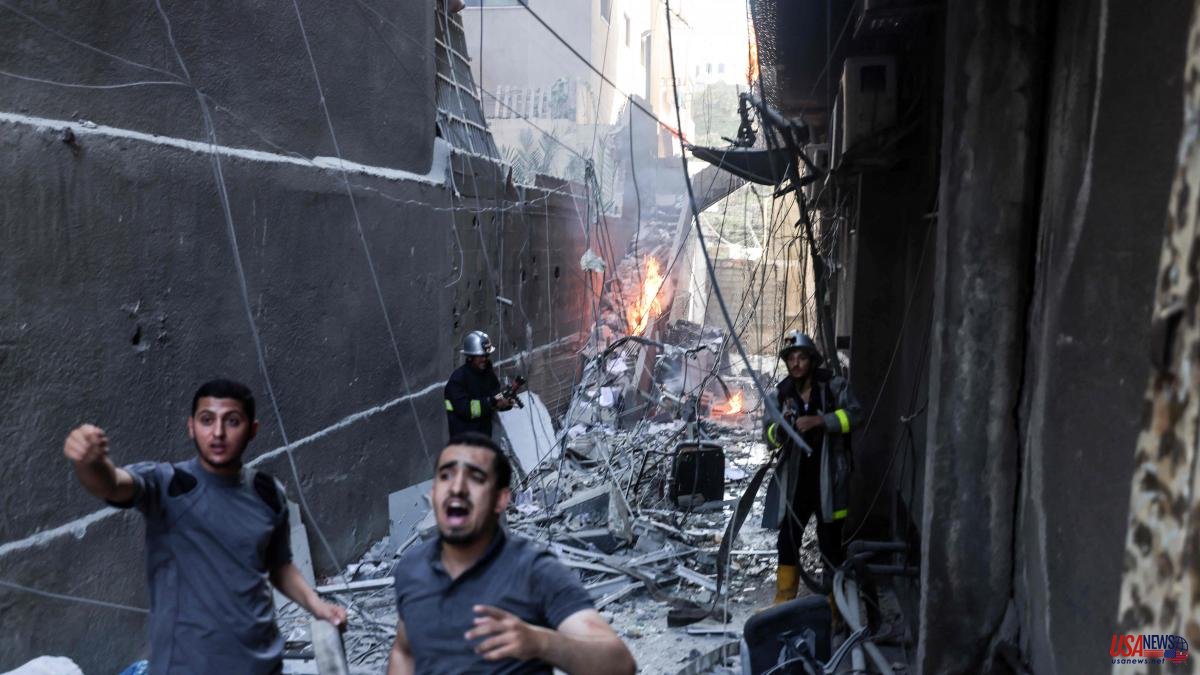 The Israeli army announced on Saturday that it was preparing for "a week" of incursions into the Gaza Strip, where exchanges of fire with Palestinian Islamic Jihad have already killed more than a dozen Palestinians.

The worst outbreak of violence between the two enemies since a blitzkrieg last year has already deprived the tiny tongue of land wedged between Egypt, the Mediterranean and Israel and its 2.3 million people of its only powerhouse.

“It stopped working due to a shortage” of fuel, the power company said on Saturday after the Jewish state, which has imposed a blockade on Gaza since 2007, closed border crossings in recent days, effectively halting diesel deliveries.

On one side of the border, rocket warnings continue to sound in Israeli towns adjacent to Palestinian territory. On the other, the city of Gaza is paralyzed, between deserted streets and closed shops. And it seems there is no way out.

An Israeli military spokesman said the army "is not currently conducting ceasefire negotiations." However, Egyptian officials had previously told AFP that Cairo, a historic intermediary between Israel and armed groups in Gaza, was trying to set up mediation.

Since Friday afternoon, Israel claims to be attacking sites belonging to Islamic Jihad, of which 15 fighters have been killed according to the Israeli army, while Gaza authorities report 15 dead, including a five-year-old girl, and 125 wounded.

The armed wing of Islamic Jihad said on Friday after firing more than 100 rockets at Israel that it was only a "first response" to the assassination of one of its leaders, Tayssir Al-Jabari, in an Israeli attack.

Israeli forces also arrested 19 members of the Islamic Jihad - considered terrorist by Israel, the United States and the European Union - in the West Bank, a territory occupied since 1967 by the Jewish state.

It was the arrest of a leader of the group in the West Bank earlier this week that led to this new confrontation. Fearing reprisals, Israeli authorities said they were launching a "preemptive strike" in Gaza, a micro-territory ruled by the Islamist movement Hamas and where Islamic Jihad is well established.

This is the worst confrontation between the Jewish state and armed organizations in Gaza since the May 2021 war that left 260 dead in eleven days on the Palestinian side, including fighters, and 14 dead in Israel, including a soldier, according to local authorities. .

Islamic Jihad ruled out the option of a ceasefire on Saturday. After the first raids, the organization accused the Jewish state of having "started a war". For the Israeli Prime Minister, Yair Lapid, it is a "precise anti-terrorist operation against an immediate threat", that of the Islamic Jihad, "an auxiliary of Iran" who wants to "kill innocent Israelis".

The Revolutionary Guards, Iran's ideological army, threatened Israel with "paying a heavy price", assuring that the Palestinians "were not alone". Russia said it was "deeply concerned" about the violence and the European Union expressed "deep concern" and called on all parties for "maximum restraint."

In 2019, the death of an Islamic Jihad commander in an Israeli operation had already led to several days of deadly exchanges of fire. Hamas, which has fought Israel in four wars since taking power in 2007, kept its distance.

For Jamal al-Fadi, professor of Political Science at Al-Azhar University in Gaza, Hamas does not want "to be dragged into a total war" and "since it does not get involved", this new outbreak of violence should end "in the days to come." ". "But if more civilians are killed, he will feel compelled to retaliate," said Mairav ​​Zonszein, an expert at the International Crisis Group (ICG).

Since Tuesday, Israel has closed all of its border crossings, forcing the thousands of Gazans who have work permits in Israel to stay home. And in Tel Aviv, further north, the friendly soccer match between Atletico Madrid and Juventus Turin has been canceled for "security reasons."