"Giants", "family"... the press surrenders to the European champions

The Spanish team was crowned champion of the Eurobasket last night for the fourth time in its history, after beating France in the final by 88-76. 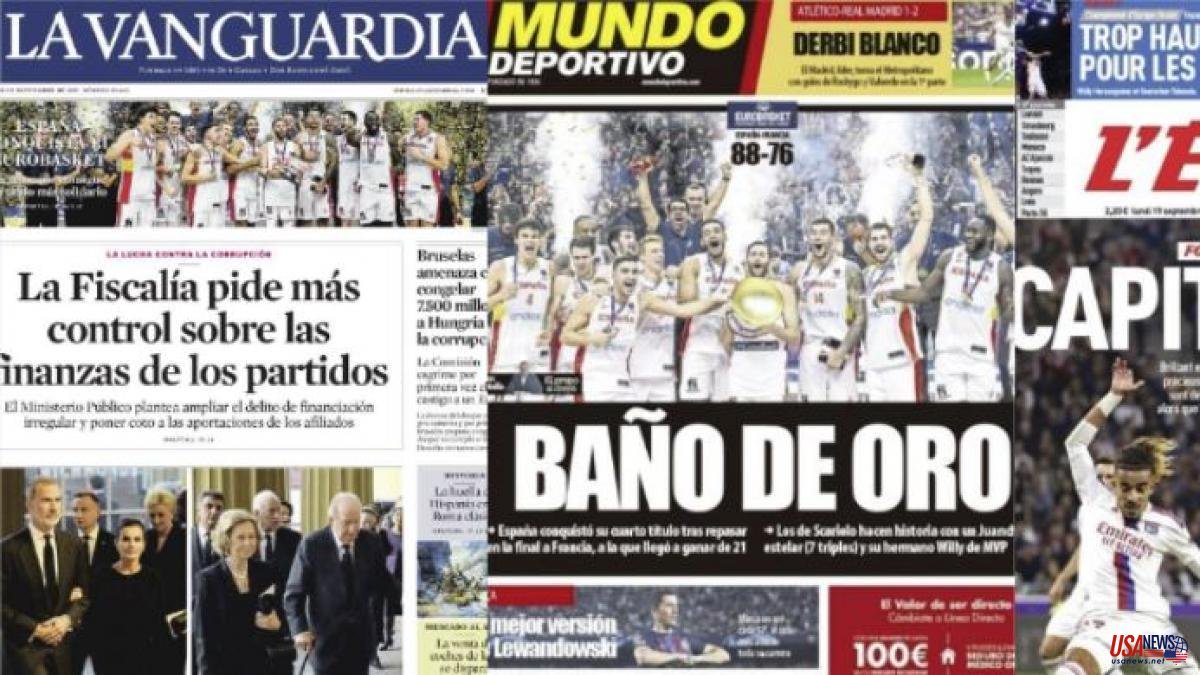 The Spanish team was crowned champion of the Eurobasket last night for the fourth time in its history, after beating France in the final by 88-76. A feat that is reflected today on the front pages of the main newspapers, both sports and general, in Spain. Also on the other side of the border they have echoed the Eurobasket final. The French L'Equipe headlines: 'Too high for the bleus'. And it is that the team led by Scariolo gave a real recital against the French to be crowned, once again, European champion.

'Golden Bath' headlines Mundo Deportivo on its cover this Monday, along with an image of the team lifting the trophy and two subheadings highlighting Spain's superiority: "Spain won its fourth title after beating France in the final, the one that won 21”, and the great role of the Hernangómez brothers: “Scariolo's men make history with a stellar Juancho (7 triples) and his brother Willy, MVP”.

The newspaper Sport has opted for the same photograph, but occupying the entire front page, along with the headline 'Golden Giants'. “Spain conquers the Eurobasket by beating France in a grand final. The selection maintains its hegemony: it has 14 medals in 21 years”, adds the newspaper.

For its part, the newspaper Marca bets on a great photograph that wraps the front and back of today's edition with an euphoric Rudy Fernández raising the trophy with his teammates. 'Golden lesson' he writes in gold letters and completes it with another message: "As it seemed impossible... They did it!".

The other sports newspaper in Madrid, the As newspaper, headlines 'Movie Champions', and adds: "Spain culminates its fourth gold in a Eurobasket with a colossal Juancho. His brother Willy, MVP of the championship”.

Also the leading sports newspaper in Valencia Superporte dedicates its cover to the gold of Spain: 'How the family shoots!', and dedicates the subheading to highlighting the role of the two Valencia Basket players: "The team makes history with another Eurobasket after beat France. Pradilla and López Aróstegui, another gold for Valencia Basket”.

The historic deed of the Spanish team has crossed the border of sports newspapers and also the generalists have surrendered to those of Scariolo. With photographs of the champions with their gold medals and lifting the trophy, all the main Spanish newspapers have made room to explain the victory over France.

"Spain conquers the Eurobasket", headlines La Vanguardia in a frieze at the top of its cover along with a photograph of the celebration. El País places the news in the lower left margin of its front page next to the headline 'Spain culminates its feat by beating France in the Eurobasket final'.

The newspaper El Mundo headlines 'The unexpected Spain' along with an image of Rudy Fernández with the champions cup. More prominence has the victory in ABC, which dedicates its entire cover to a large photograph of the celebration along with the headline 'The relay team is bathed in gold'.