Furor in Naples for the World Cup in Argentina: how they prepare for the final in the land where Maradona was king 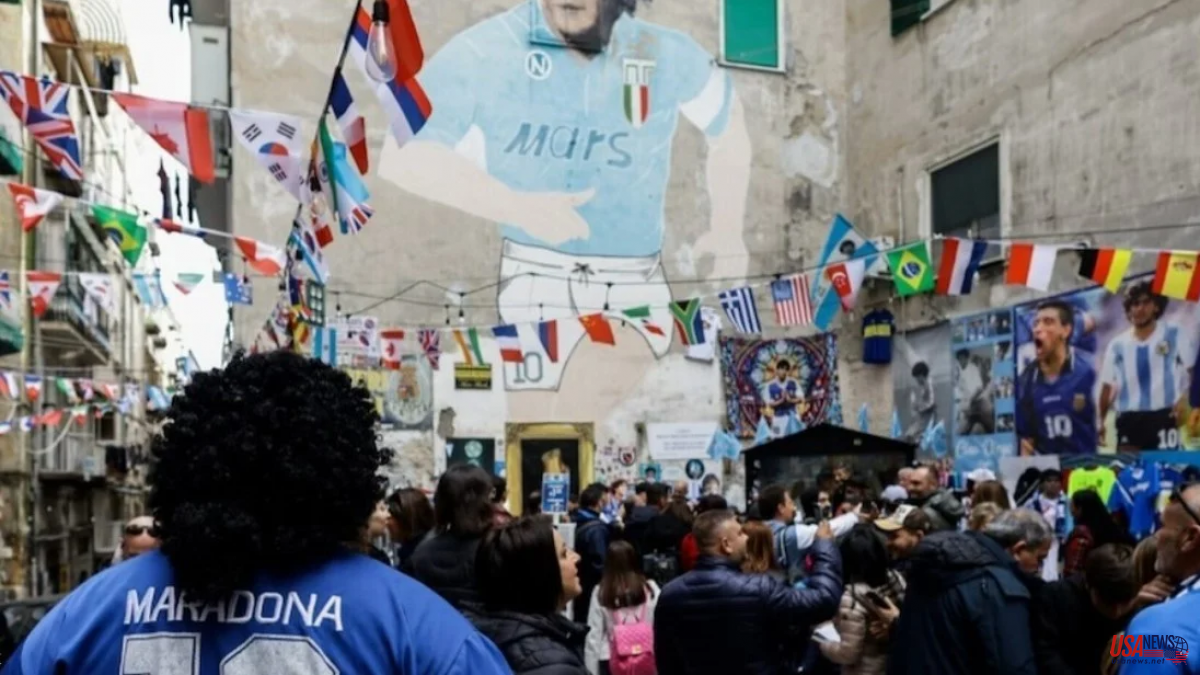 Bangladesh, India, Jamaica, Peru. The images of celebrations for the victories of the Argentine team proliferated during this World Cup. Beyond those corners, there is a point on the planet where fanaticism for the Albiceleste has a special flavor: Naples. In the city where Diego Armando Maradona lived his most brilliant years as a footballer, the final to be held today between Argentina and France is eagerly awaited, which will be followed by Neapolitans and Argentines on giant screens arranged in different parts of the city.

After the spontaneous gatherings of hundreds of fans to celebrate the first Argentine victories in the Spanish Quarter of the capital of the Campania region and that giant screens were placed there to follow the semifinal clash against Croatia, the ritual is repeated today at the initiative of the Largo Maradona organization, the name by which the square in the highest part of Via De Deo is known, where the most popular mural of the best soccer player of all time is located.

This will not be the only point where there is a meeting to follow the match that will define the Qatar World Cup champion today, since the Neapolitan City Council, in charge of Gaetano Manfredi, announced that a screen would be installed in the Castel dell'Ovo, the castle oldest in the city, in the promenade area.

To these two meeting points is added a third: the Diego Armando Maradona stadium. The initiative arose from different groups of Argentines residing in Italy and in other European countries. “We had no doubts, it was a spontaneous choice: 'Is there a World Cup final? Let's see him in Naples'. 1,000 people from all over Italy have come to the city. But also from abroad: Spain, Switzerland, Germany. All the Argentines who are in contact with us will be in Naples," Luciano Nario, one of the promoters, told the Neapolitan newspaper Il Mattino.

The original plan of the most enthusiastic was to get the club in which Diego shone to open the doors of the stadium. Finally they have managed to be allowed to install a screen of six meters by three meters on the outskirts of the property, next to Curva B. There they have also set up seats, tables and a bar for attendees, who must pay 8 euros to access .

In the run-up to the match, the most fanatical Neapolitans and the Argentines have gathered in Piazza Dante, in the historic center of the city, to raise a flag. From there they have moved to the different meeting points to observe the meeting. And then, regardless of the result, they will converge on the Spanish Quarter to pay tribute to Diego at the Largo Maradona.

The accompaniment of the Neapolitans to the Argentine national team was not surprising, especially in a World Cup that Italy did not play because they did not qualify. There was not even an iota of doubt that five Napoli footballers were competing in the tournament with other selected players: the Pole Piotr Zielinski, the Mexican Hirving Lozano, the South Korean Kim Min-jae, the Cameroonian André-Frank Zambo Anguissa and the Uruguayan Mathías Olivera. The trail left by Maradona is much stronger.

In addition, lovers of coincidences (which there are in all parts of the world) recalled in these hours that the last time the Argentine national team won a World Cup was in June 1986, with Diego as the banner in Mexico, and that 10 more months Napoli later won its first Scudetto, also led by the Villa Fiorito star. Today the sky-blue team is first in Serie A, with eight points ahead of Milan.