The Argentine authorities are investigating a 35-year-old street vendor of Brazilian origin for having tried to shoot Argentine Vice President Cristina Fernández. 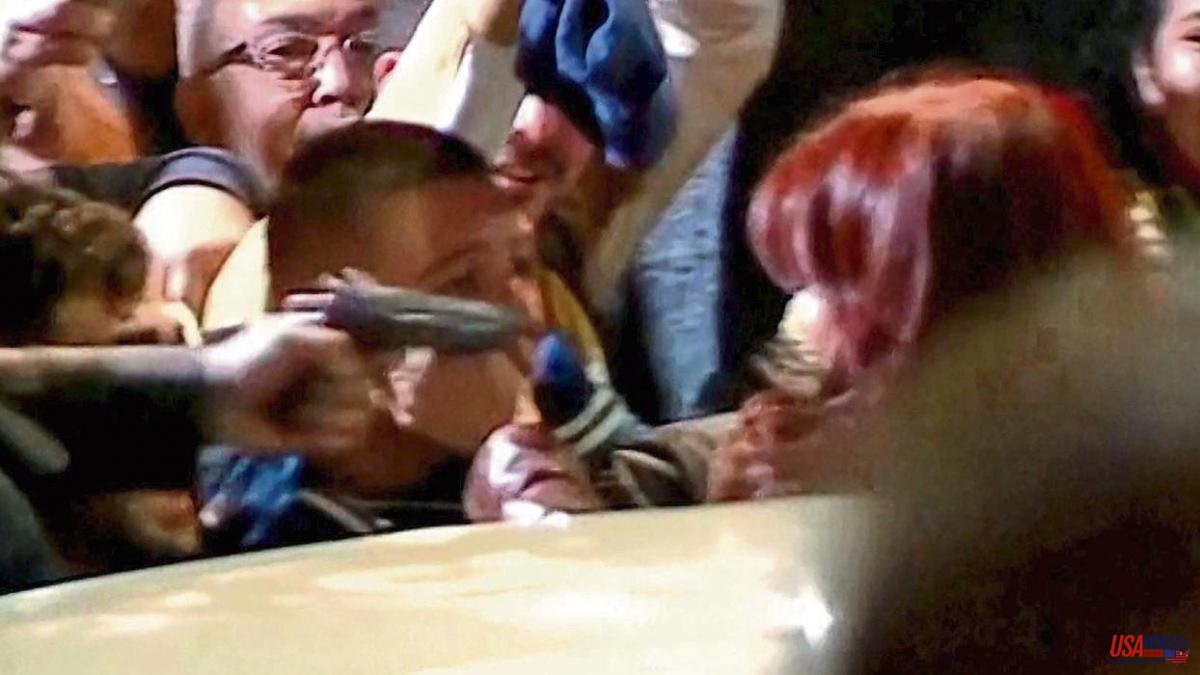 The Argentine authorities are investigating a 35-year-old street vendor of Brazilian origin for having tried to shoot Argentine Vice President Cristina Fernández. The police are trying to investigate whether André Sabag Montiel, who has lived in Argentina since 1998, acted alone or was part of an organization. "We cannot confirm any hypothesis, everything is being investigated," an official from the Ministry of Security told the AP agency.

Argentina, a country with a long history of political violence, entered a state of shock Thursday night after Sabag tried to shoot Argentine Vice President Cristina Fernández with a “loaded” pistol. The event occurred in the surroundings of his home in the Recoleta neighborhood, when Argentine politics greeted his supporters while a vigil was held in support of him in front of his house.

Images taken by the television channel C5N recorded the moment in which a person pulls out a firearm in front of the face of the president (president between 2007 and 2015), who immediately realizes what is happening and crouches between his escorts. Despite pulling the trigger, for unknown reasons, the weapon, a 32-caliber pistol, was never fired despite having bullets in the magazine.

“A person who is indicated by those who are close to him shows a weapon and is detained by custody personnel, they move him away, the weapon is found. Now the situation has to be analyzed by our scientific people to evaluate the traces and the capacity and disposition that this person had,” said the Minister of Security, Aníbal Fernández.

The president of Argentina, Alberto Fernández, reported that the weapon had five bullets and that, for a reason not yet confirmed, it did not fire despite the fact that the man pulled the trigger.

According to official sources from the Ministry of Security to Efe, members of the Argentine Federal Police, which is in charge of the custody of the vice president, were alerted by demonstrators present at the scene that "a man would be armed among them." “For this reason, he was identified by arresting him on Juncal and Uruguay streets (near the vice president's home) and a weapon was found a few meters from the place. The situation is under control,” these sources assured Efe.

In a message broadcast by the national network, the president of Agentina, Alberto Fernández, declared Friday a non-working day so that society expresses its rejection of violence “in peace”. The president maintained that the "attack" against the vice president is the "most serious event that has happened" since Argentina returned to democracy in 1983, and urged the entire political class and society to show their rejection of the attack against the vice president.

The center-left government coalition Frente de Todos announced a demonstration "in defense of democracy" for Friday at noon in Buenos Aires.

"I saw that arm emerge over my shoulder with a weapon, and with people around me we controlled it," a follower of the vice president, who did not want to give his name, told the AFP agency. Gina De Bai, another witness who was close to the vice president, told the AP that she heard "the sound of the trigger being pulled" although she did not realize it was a firearm until security personnel apprehended the man. .

“A man pointed a firearm at his head and pulled the trigger. Cristina remains alive because, for a reason that has not yet been technically confirmed, the weapon that she had with five bullets did not fire despite having been triggered, ”said the head of state. The president maintained that "such a reality moves the entire Argentine people."

On August 22, a prosecutor requested that the vice president be sentenced to 12 years in prison and lifelong disqualification for a case of alleged corruption over the award of public contracts in her bastion of Santa Cruz that has persecuted her for two terms. Since then, groups for and against the president have demonstrated in the streets of Buenos Aires.

In a highly polarized Argentine political landscape, tension increased in the following days as a result of the placement of a fence around Fernández's home and the accusations from the ruling party of repression of the protesters by the forces of the Government of the City of Buenos Aires –opposed to the Argentine Executive–.

"When hate and violence prevail over the debate of ideas, societies are destroyed and generate situations like the one we are experiencing today: an assassination attempt," said Economy Minister Sergio Massa. "What happened tonight is extremely serious and threatens democracy, institutions and the rule of law," he added.

Former conservative president Mauricio Macri also condemned the attack: "This very serious incident requires immediate and thorough clarification by the judiciary and the security forces," he wrote on Twitter.

Patricia Bullrich, president of the opposition Republican Proposal, criticized President Fernández's reaction to the attack, accusing him of "playing with fire" by decreeing a national holiday "to mobilize activists" instead of focusing on investigating the facts.