Death to Chaikovski in Ukraine

A young woman, with two braids to her waist, is standing in the lobby of the Ukrainian National Academy of Music Chaikoskvi and three security guards block her path. 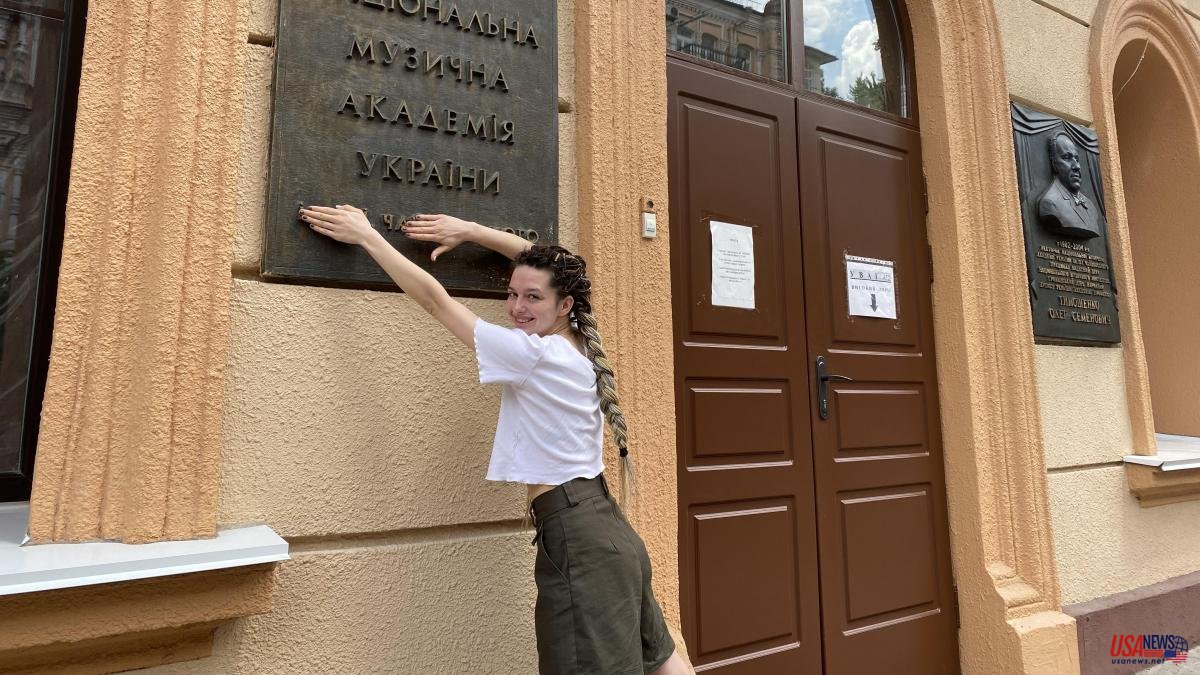 A young woman, with two braids to her waist, is standing in the lobby of the Ukrainian National Academy of Music Chaikoskvi and three security guards block her path. She shakes her head indignantly and sits down on a bench.

“I am a former student and I have come to express my opinion, it is a historic moment for the Academy. But they won't let me in,” protests Katerina Kosetska, 27, a symphonic opera director.

The guards are tense. This imposing building, located on a corner of Kyiv's Maidan Square, is a trench in the culture war that Ukraine has declared against Russia. The rector is meeting with professors and students (only current ones, she has been told) to discuss whether Tchaikovsky should be removed from the name of the conservatory.

The Russian invasion has unleashed a derussification offensive in Ukraine. It is necessary, its supporters say, to uproot three centuries of Russian imperialism and oppression of the Ukrainian nation. Last Sunday, the Parliament voted two laws that restrict Russian books and music and increase the quotas of Ukrainian on television and radio. The support was unanimous, even from deputies considered pro-Russian. Campaigns are sprouting all over the country to change the names of streets, hospitals or schools.

It was a matter of time before the wave reached the National Academy of Music. Founded in 1913, it has been named after the Russian composer since 1940. The website explains that Piotr Tchaikovsky, who lived between 1840 and 1893, "often visited Kyiv" and played a "significant" role in the birth of the conservatory, as follows: "expressed confidence that the development of music education in Kyiv was in good hands."

Arguments that do not convince Kosetska. “Tchaikovsky had Ukrainian blood, but he always defined himself as a Russian composer. He was inspired by our folk music, as the Russians have always done, appropriating other cultures without recognizing them, he says. We are in a war, not only military but also propaganda. Tchaikovsky is a brand of Russian imperialism. It makes no sense that in the heart of Kyiv we have a National Academy named after him.”

That the matter is delicate is perceived not only in the gestures of the guards. “It is an internal discussion. The rector will not talk about this issue with the press, ”replies his secretary dryly, through an intercom in the lobby.

The rector, Maksim Timoshenko, opposes the change. For him, Ukraine must fight “against living Russians, not dead Russians” and “Tchaikovsky has nothing to do with the politics or culture of modern Russia, nor with the current aggression against Ukraine. (...) When Tchaikovsky was alive and composing, where was Ukraine? (The country did not exist as such, divided between the Russian and Austro-Hungarian empires).

Kosetska has a word to define the rector. "He is a jerk." Literally a little Russian; the inferiority complex before the great Russian empire. “It is typical of those who were born under the USSR. I have seen it in many teachers. He is different for my generation. We Ukrainians must understand that we have our language and culture, that we can be proud and we don't have to continue being little Russians”, says the young woman.

“Decolonization!” exclaims the composer Ilia Razumeiko, 33, a renovator of Ukrainian opera. “It has nothing to do with the aesthetic value of Tchaikovsky's symphonies. As long as the Russians are killing in the Ukraine, everything that has to do with Russia is poisoned. Culture is a part of war. Tchaikovsky, like Dostoyevsky or Pushkin, have been instruments of colonization. Russia has used them to kill other smaller cultures, languages ​​and peoples. It has been a cultural genocide of centuries. Not only in Ukraine. Do you know any Belarusian composer? Of course not, because the Russians took it upon themselves to eliminate generations of intellectuals."

To say that the invasion has accelerated derussification is an understatement, says Timish Martinenko, a member of the Kyiv municipal toponymic commission. “It has propelled her,” he says. Unlike other former Soviet republics, which already began cleaning up communist symbols from public spaces in the 1990s, decommunization in Ukraine did not start until 2015, after the Maidan protest. Today there is already direct talk of derussification. They are the two sides of the same coin, argues Martinenko: “The USSR was actually a Russian state. That is why they not only disseminated Soviet symbols but also Russian culture. It was part of a cultural assimilation.”

Requests to the toponymic commission have skyrocketed since the Russian invasion. “After Maidan we started the process, but the population was not ready for a massive derussification. The invasion has changed everything. 77% of Ukrainians are today in favor. This does not mean that those who had pro-Russian sentiments and a Russian identity before the war have suddenly become Ukrainian nationalists. But a majority has changed its mind about Russia,” he says.

Martinenko believes that derussification must have a limit. "We must not erase, as the radicals claim, anyone for the simple fact of having a Russian ethnic origin," he warns. The commission, for example, has kept Tchaikovsky on the street or Mendeleev, the chemist who invented the periodic table, considering that they are Russians of universal fame. He has also refused to erase Nikolai Leskov, a Russian writer who lived much of his life in Kyiv and set his novels in the city. “Ukrainian national identity has never had an ethnic basis. That is why we have a Jewish president, who also speaks Russian at home”, he affirms.

Derussification reaches the most intimate corners: in the thousands of Ukrainians – especially young people – who have stopped speaking in the language of the invader, even if it is their own. On the day of the invasion, Andri Udovichenko made the decision. “I uninstalled the Russian language from my computer keyboard and told my parents that I would only address them in Ukrainian now,” explains this lawyer, who was born into a Russophone family from Kharkiv.

Andri has gone through the Ukrainian courses organized in Kyiv by the actress and singer Marichka Shtirbulova. “Many want to speak Ukrainian, but it is difficult for them because they have always spoken in Russian. It is the result of centuries of Russian domination. With the invasion, many people have seen that the Russian occupation is not only territorial, the cultural one is much stronger”, reflects the actress.

Born into a bilingual family in Kyiv, it was at the age of 17 that she decided to switch to Ukrainian. "I started to get seriously into folk music and saw that it was a big contradiction if I then lived in Russian," she recalls. “I am not happy that I know how to speak Russian. I don't even put it on my resume. Now that Russia is killing us, I guess it's better understood."

Shtirbulova is now performing a Ukrainian classic at the National Drama Theater. She has had a hard time getting back on stage. “Art has always been for me an instrument of dialogue, of change. But when the war broke out, for the first time in my life I felt that art was useless. When you're up against evil, real violence, there's no room for art. Only weapons work. The first month I thought I would never act again. Then, little by little, I began to understand that singing and acting make me useful. But I still think about leaving everything and going to fight, ”she admits.

Nana Garsevanishvili, who at the age of 24 directs her first documentary, the story of a teenager from Donbass, is trying to leave Russian like someone leaving a boyfriend she is in love with but knows is not for her. “Many friends stopped speaking Russian eight years ago when the war started in Donbass. I have been one of those who have continued with Russian. Because I love this language. Not the Russian of Russia, but the Russian of Kyiv. But I know that if I speak this language it is because Russia has always tried to cancel Ukraine, to deny our existence as a different country and culture.”

The tear is deep. “I was very into Russian counterculture,” she explains. He used to say that culture is not politics. What a bullshit. After we were invaded, my heart sank with the reaction of all those Russian artists. I have been so wrong these years, by ignoring what was happening in Donbass, by passing from politics”.

Nana looks down and says, almost whispering: "I was never against Russia and it was a huge mistake."