The Finestres bookstore has awarded four grants of €25,000 each to four non-fiction writers, two of whom write in Spanish and the other two in Catalan. 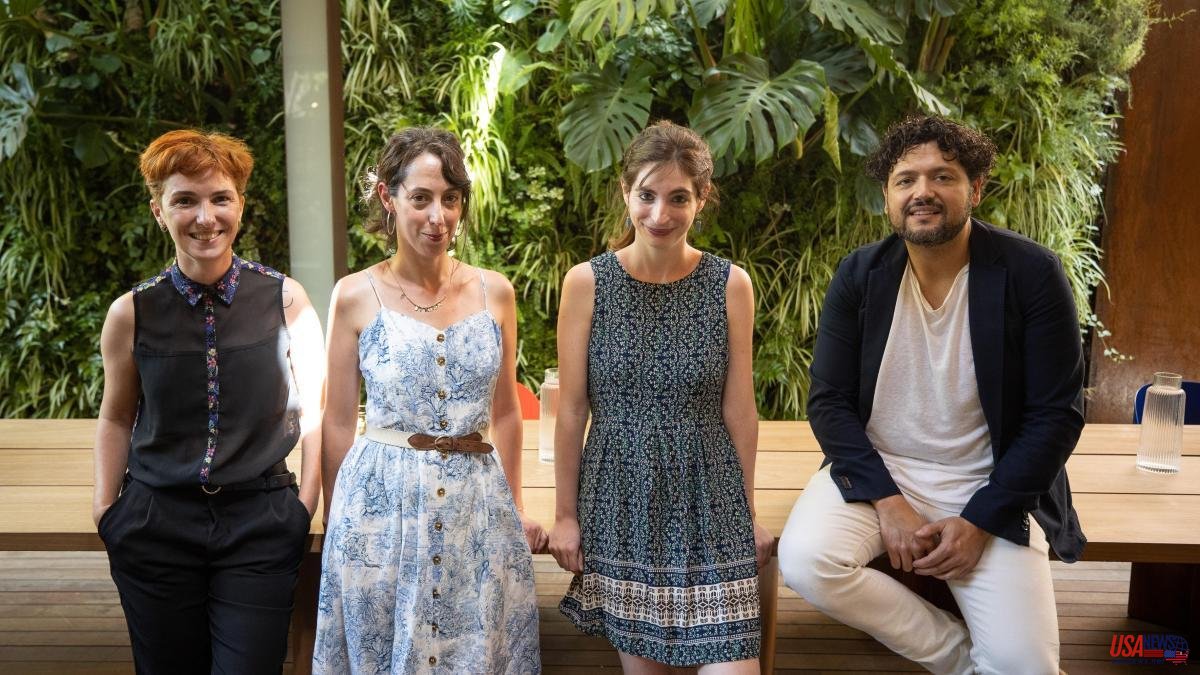 The Finestres bookstore has awarded four grants of €25,000 each to four non-fiction writers, two of whom write in Spanish and the other two in Catalan. The purpose of the scholarships is to encourage essay writing and encourage reflection and debate around current issues. This year's winners were Marina Pintor and Carolina Arabia in the Spanish language category and Miquel Bonet and Bel Olid in Catalan. The jury has evaluated a total of 298 works of very diverse genres: humanistic chronicle, popular science, history, politics, music, literature and art. "All the samples have been read and judged anonymously, without knowing the origin or name of the authors", explained Marina Espasa, head of the jury for the category in Catalan, during the announcement ceremony of the winners. The scholarship holders have presented a sample of their projects and will benefit from financial aid for a year so that they can finish and publish their books.

Carolina Arabia, one of the scholarship recipients in the Spanish language category, has researched the history of musical practices as a form of communication with animals in her work On Songs and Animals. From the Moroccan snake hunters who play the flute to tame these dreaded reptiles, to the Asturian beekeepers who sing to the hives. Arabia makes a proposal between the travel chronicle and the essay, in order to document this practice: "Young people no longer sing to the herds, it is a practice in danger of extinction", explained the author at the announcement ceremony of the winners. The author became interested in these songs after a friend of hers told her that her family sang to the cows: "I didn't believe it when she told me about it, but I was very interested," she added. Her research focuses on four geographical areas: Morocco, the Colombian-Venezuelan plains, Bhutan and Spain.

The second grantee has been Marina Pintor Pareja with The erotic wound, in which she has explored eroticism. She is born from the desire to understand desire and female sexuality after having been a victim of sexual violence, which the author defines as ambivalent: between outbursts of passion and fragility, between anger and promiscuity. “Reconstruction after sexual trauma is not linear, there is no absolute resolution, it is a circular trajectory, like a labyrinth”, explained Pintor. The author's objective is to understand this apparent paradox through her personal experiences, but above all, thanks to literary references such as Virginie Despentes, Camille Paglia or Victor Català (Caterina Albert).

The third scholarship recipient was Miquel Bonet with El rei gord, a project about the war in the world of cooking that pitted Santi Santamaria and Ferrán Adría, two of the most renowned chefs on the Catalan culinary scene, against each other. Bonet's objective is to explain the emergence of the figure of the chef as a true star during the 1990s and to account for the factors that led to the conflicts between Santamaría and Adriá. "Elite Catalan cuisine was almost like a Punic War at that time, and that has been tried to hide," explained the author, adding that his what is he going to do with the 25.

Lastly, Bel Olid's show, Tria la tevaventura, deals with the odyssey faced by many couples during assisted reproduction processes. The text is structured following the format of many children's literature books, where the reader can jump from one page to another depending on the decision they want the protagonists to make. "The propaganda of many reproduction clinics is based on the fact that everyone will be able to fulfill the dream of becoming fathers and mothers, nobody talks about the economic, physical and emotional cost of these processes", explained Olid. Its objective is to make visible the reproductive difficulties of many couples and for it to become a social issue: "There is a double taboo, on the one hand, about the way in which women's bodies are treated in obstetrics and also about the way in which we face the death or loss of someone close to us”, he explained.