Berrettini eliminates Davidovich in epic US Open round of 16 match

Alejandro Davidovich Fokina from Malaga said goodbye to the US Open after losing this Sunday in the round of 16 to Italian Matteo Berrettini 3-6, 7-6(2), 6-3, 4-6 and 6-2 in an epic and very exciting match of three hours and 46 minutes. 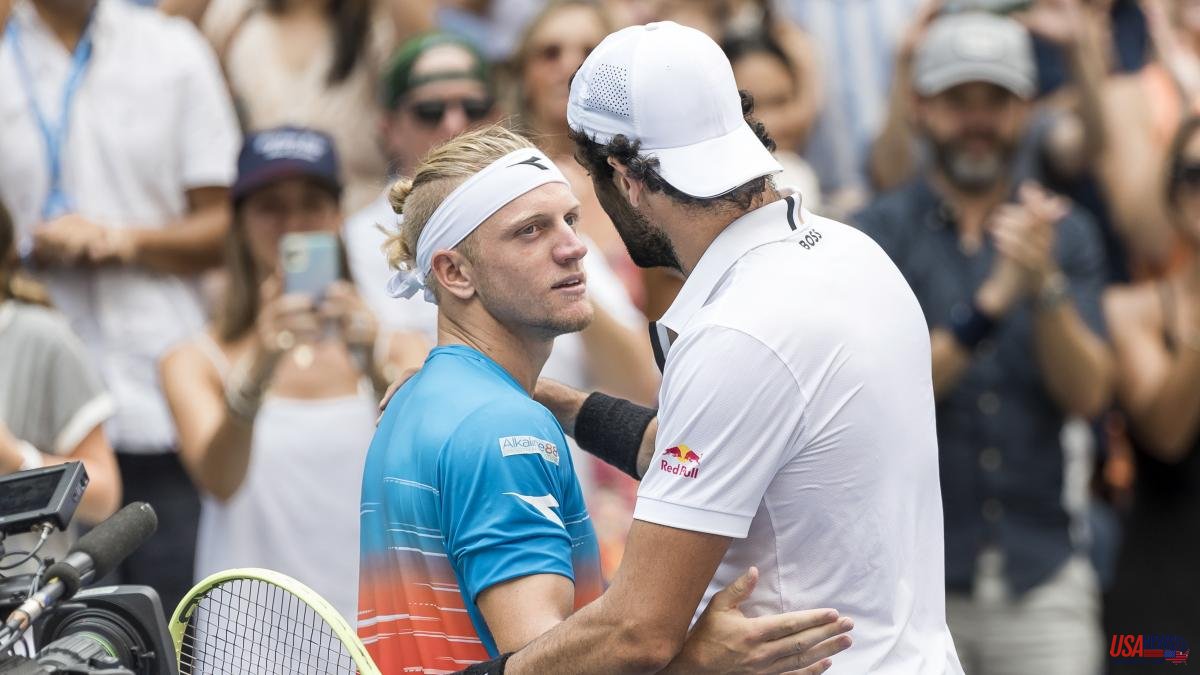 Alejandro Davidovich Fokina from Malaga said goodbye to the US Open after losing this Sunday in the round of 16 to Italian Matteo Berrettini 3-6, 7-6(2), 6-3, 4-6 and 6-2 in an epic and very exciting match of three hours and 46 minutes.

Fighting until the last point (he had a bad turn with his knee at the end of the fifth set that forced him to be treated by the physiotherapist), the man from Malaga, number 39 in the ATP and finalist this year in the Monte Carlo Masters 1000, thus could not equal his best result in a Grand Slam after reaching the quarterfinals of Roland Garros in 2021. Berrettini, who occupies position 14 in the world ranking, will face the winner of the match between the Norwegian Casper Ruud and Frenchman Corentin Moutet.

Very focused from the start, Davidovich was 0-40 in the first turn of his opponent's serve and soon got the first set back on track with a 0-3 lead in fifteen minutes. Against the security of Davidovich, who was reading the game perfectly to know when and how to attack, Berrettini was irregular and erratic and could not impose his serve and his forehand.

No doubt on his serve, Davidovich served at 3-5 to take the set. There, he had a small moment of danger when Berrettini fell to 0-30, but the Spaniard responded wonderfully by winning four points in a row to win the first set in 36 minutes and with 84% of his first serves won.

The Italian continued his progressive improvement and exhibited a more incisive game from the back of the court in the second round. However, that aggressiveness led him to make mistakes while Davidovich was doing a great job of limiting his mistakes.

With 2-2 on the scoreboard, the Spaniard took a brilliant return from his sleeve and achieved a "break", but right afterward Berrettini hit him back and the set remained even. With the forces now balanced between both players, Davidovich bravely solved a set ball against (5-4 and 30-40) with his service.

Already in the sudden death, Berrettini let go, his right carburized wonderfully and scored the hard-fought second set after an hour of play. The positive momentum for the Italian continued in the third set as he broke Davidovich's first serve break.

The wind was now blowing in Berrettini's favor as Davidovich struggled to recapture both the sensations and energy of the first set. However, the unforced errors began to accumulate on Davidovich's account, Berrettini was still at the helm of the match and finally the Italian took the third set from the rest and quite comfortably after 40 minutes.

Davidovich screamed and waved his arms in search of an epic reaction and found the spark in a huge forehand parallel to the line on which he built his break in the third game of the set (1-2).

The mood of "Foki, Foki!" They were heard between point and point in the Louis Armstrong Stadium in New York and Davidovich regained firmness with his serve and his forehand in the early stages of the duel. The Spaniard held a set point from return but had to wait on his serve to win the fourth set shortly after the match had gone over three hours of play.

It seemed that Davidovich was reaching the final set with an extra boost, but the match was already in the field of emotions and not of logic. Davidovich lost his first turn to serve, reacted immediately with a "break" and lost his service below (3-1 for Berrettini).

In addition, Davidovich caused a scare shortly after when he sprained his left knee in a bad turn and asked for medical assistance with 4-2 for the Italian. The Spaniard returned to the track physically diminished and could do little before a Berrettini with poise in the section final and that ended the dream of Davidovich in New York.