Benedict XVI's funeral will be on January 5

The death of Benedict XVI places the Vatican before an unprecedented situation, the burial of a retired pontiff. 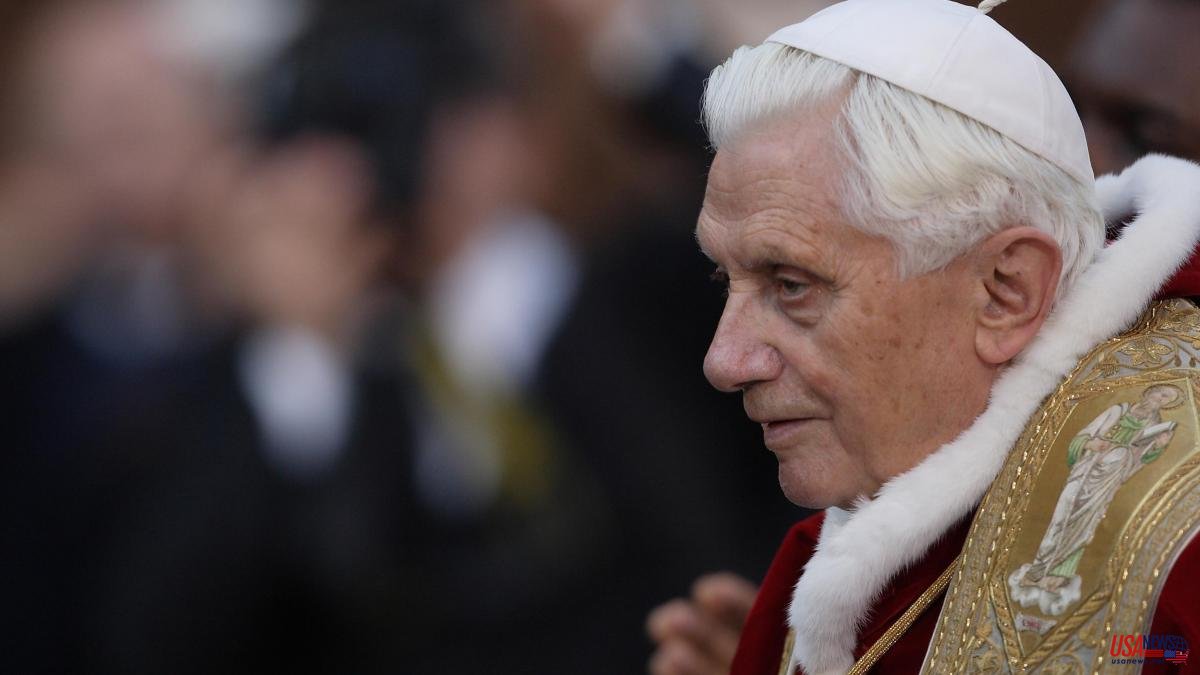 The death of Benedict XVI places the Vatican before an unprecedented situation, the burial of a retired pontiff. It is the first time in the modern history of the Church that a pope who resigned has died, so the ceremonies that will take place on these days will set a historical precedent for the future with the possibility that more popes will follow his example. Everything will depend on two things: the wills that Benedict XVI has written in his will, and also the decisions of his successor, Pope Francis, who will officiate the funeral to be held on January 5 in Plaza de Saint Peter. It will be the first time that an active pope has fired his successor.

Since there is no protocol for the death of a pontiff emeritus, it is most likely that the Holy See wants to continue with the same rituals that would correspond to an active pope, except for the part of the election of a new pontiff through the conclave. The only thing that is known so far is that they will follow the rule of simplicity, as Benedict XVI himself had said so, according to the spokesman for the Holy See, Matteo Bruni. "They will be solemn funerals, but sober," he clarified.

The Vatican document to follow in this case is the Apostolic Constitution Dominici Gregis, promulgated by John Paul II in 1992. In its article 27, the text says that, after the death of the Roman Pontiff, the cardinals will celebrate "the obsequies in the suffrage of their soul for nine consecutive days, according to the Ordo Exequiarium Romani Pontificis, whose norms they will faithfully comply with”. In other words, if the same steps provided for an active pope are followed, the mourning for Benedict XVI will last nine days.

The first step will be to dress the mortal remains of the Pope and install them in a catafalque in one of the rooms of the Vatican Palace. The most normal thing is that they were arranged in the Clementine Room so that they could be visited by the highest authorities of the Roman curia and the diplomatic corps. Later, the Apostolic Constitution indicates that the cardinals must "establish the day, the hour and the way in which the corpse of the deceased Pontiff will be transferred to the Vatican Basilica, to be exposed to the veneration of the faithful", something that has now surely corresponded to the Pope, in consultation with the inner circle of Benedict XVI, beginning with his historic secretary, the German Archbishop Georg Gänswein. The transfer to the Basilica has already been announced, and it will take place this Monday, January 2, and thousands of people are expected to come to say goodbye to the pope who resigned.

Some curiosities of the protocol of the papal obsequies that are written in the Dominici Gregi is that no one is allowed "by any means to take images of the Supreme Pontiff sick in bed or deceased, nor to record his words with any instrument to later reproduce them". If, after the death of the Pope, someone wants to take photographs for documentation, the cardinal camerlengo should be asked, but in any case he will not be able to allow "photographs of the Supreme Pontiff to be taken if he is not dressed in pontifical habits".

Afterwards, the burial must take place "except for special reasons" between the fourth and sixth day after death, and in this case the date has already been set for January 5, at 9:30 in the morning. Authorities and heads of state from around the world are expected to be invited, as well as members of the college of cardinals and the diplomatic corps.

The usual thing would be that the emeritus pope would be buried in the crypt of San Pedro, but it could also be that in his will he had written other wills, such as resting with his family in his native Bavaria or in the Basilica of San Juan de Letrán, Rome cathedral. In the end, Pope Ratzinger was a pope who surprised the world in his lifetime by announcing his resignation, so other surprises would not be ruled out. However, his authorized biographer, Peter Seewald, already assured in 2020 that Benedict XVI's will was to be buried in the same crypt where John Paul II was buried.