Thread and needle and to sew. 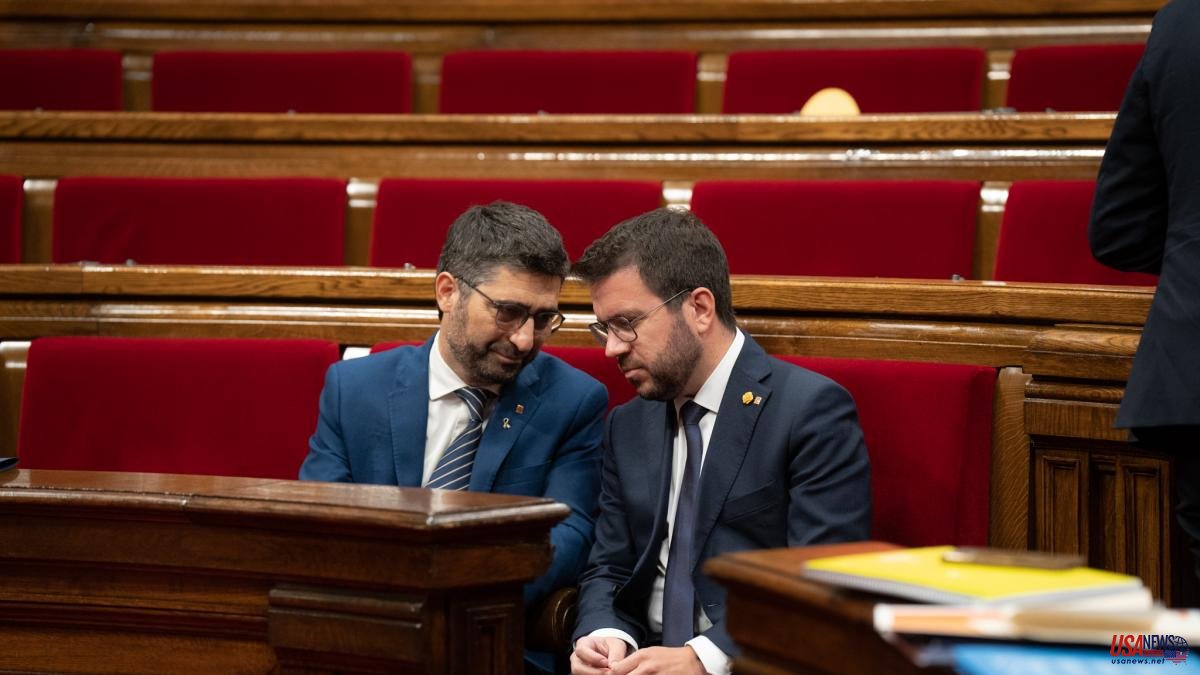 Thread and needle and to sew. With a thimble, to protect yourself, just in case: the crisis in the Government has led to Jordi Puigneró (JxCat), vice president of the Government. It was announced by Pere Aragonès in an appearance in the Gothic gallery of the Palau de la Generalitat: "I have decided to stop Mr. Jordi Puigneró, vice-president of the Government and councilor of Digital Policies and Territory. It is a decision that hurts me, but it is a necessary step because the institutions of the Generalitat cannot be permanently in question". The president has not forgiven that until now the government's second-in-command did not inform him of the question of trust.

The head of the Government hopes that this dismissal will be the first stone to redirect the relationship between ERC and Junts in the Government and in the Parliament. But he can also push Junts to make the decision to leave the Government. It is a double-edged sword. Junts sent a statement at midnight in which it describes the decision as a "historical error", "violates the Government's agreement" and "defrauds the electoral mandate". JxCat meets its executive this morning to “make the corresponding decisions”.

It was precisely Puigneró who assured on Monday that his party had worked discreetly with ERC so that the general policy debate “went well”. The vice president was one of the few in his formation that he knew that in the Parliament this attack on Aragonès could come to light. The president was extremely irritated that he was not informed of the request for a question of confidence and has considered it disloyalty. He was his number two in the Govern. “Either they are the Government or they are the opposition”, reasoned from the Presidency.

The open crisis in the Government has taken him ahead. The departure of Palau de Turull and Borràs flanking Puigneró minutes before the appearance of the president was quite a staging. Also a prelude.

Aragonès argued the dismissal. “In difficult times it is essential to accompany citizens and transfer security to them”, he underlined before remarking that “distrust does not help to achieve this objective”. "The noise that had been generated has been transferred to the Government, has made its task difficult and has contributed to destabilization at a time when citizens need us very close," added the president. In any case, he clarified that the decision has been made by himself and that the position of vice president remains vacant until Junts proposes a name that "helps rebuild the trust that is currently in question."

Since 2017, in the middle of the procés, in Catalan politics it is known that important meetings are held without cell phones in the room. The same thing happened yesterday at the Palau de la Generalitat. Aragonès met urgently at 5:10 p.m. with all his ministers after JxCat's threat in Parliament on Tuesday to ask him to submit to a matter of trust if he does not comply with those investiture agreements that the postconvergents assure that they are not putting on going.

Subsequently, and after two hours of meeting, the president met with the general secretary of Junts, Jordi Turull. At the end, at eleven o'clock at night, the head of the Government appeared to announce Puigneró's departure.

This crisis has meant that the "clarity agreement" that Aragonès proposed to lay the foundations for an agreed referendum is no longer spoken of. The head of the Government counted up to three on Tuesday in Parliament, up to one hundred yesterday morning and up to one thousand in the afternoon to analyze the situation and consider whether he should part with his partners. He has done it individually, with the head of Puigneró.

Before making any decision, he asked, according to Presidency sources, one by one the ministers of JxCat, first, if they knew that the question of trust was going to be raised and, second, if they endorse requesting it, as Albert Batet expressed in the Catalan Chamber.

The pitcher goes to the fountain so much that in the end it breaks. Pending Junts' decision this morning, so far at least one of its pieces has broken. An important piece. Whether this dismissal serves to stop endangering the stability of the Government remains to be seen. There are litmus tests ahead. On Friday, a resolution proposal is voted on in Parliament that asks Aragonès to submit to a matter of confidence – the president of the Generalitat is the only one who has the power to convene it – within a month.

The initiative will force the groups to position themselves. Something similar could happen next week with a motion from the CUP, which asks for the same as the popular ones, but with a deadline that runs until December 31 of this year. Given both requests on these two possible D-days, it seems complicated that Junts can vote against both. A simple abstention of the postconvergents could motivate Aragonès to make a definitive decision, if Junts has not previously broken the deck and leaves the Catalan Executive before half of the legislature is completed.