A guide to the opera, classical and dance that the new year brings

This is an exciting year for the public that loves performing arts and classical music. 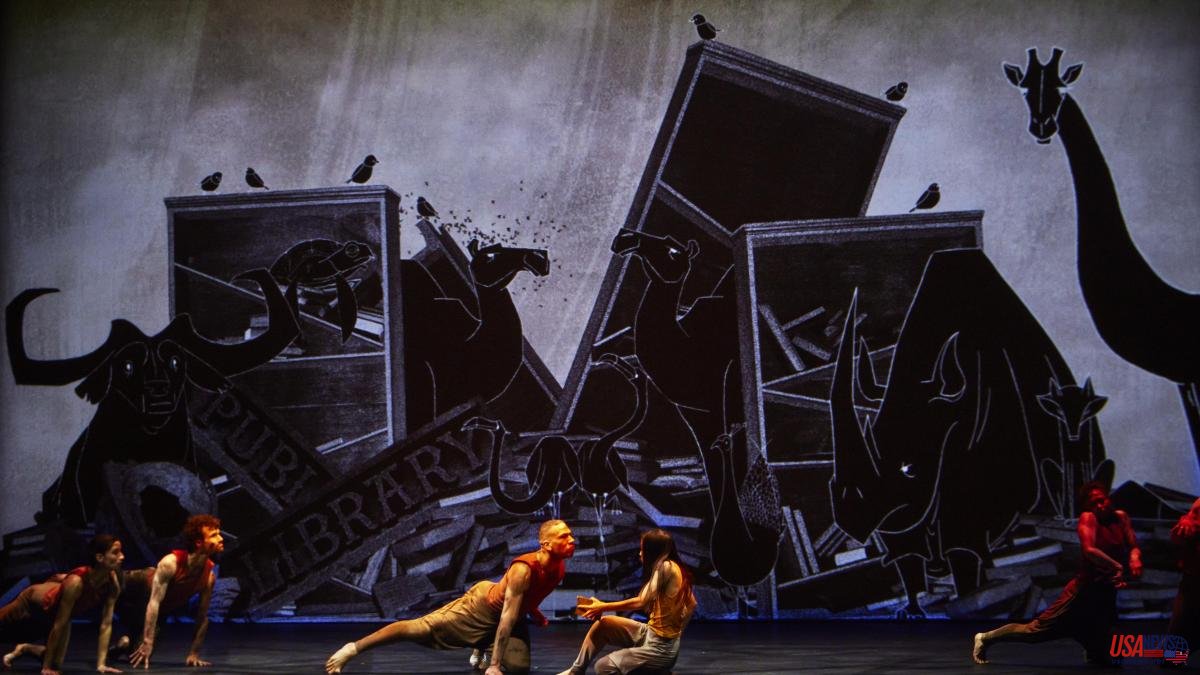 This is an exciting year for the public that loves performing arts and classical music. The pandemic has left as a legacy a greater commitment in theaters and concert halls, which seek to offer a true connection between art and the present/future. The new musical creation is no longer the devil with legs, the great divos have to revalidate themselves at all times, and the revisions of classic titles are not better for being more transgressive. The requirement for the quality of the proposals is there. These are the must-see appointments in opera houses, concert halls and dance venues.

The Teatro Real kicks off the year with this Liceu co-production (it will be seen in Barcelona in June) that deals with Henry Purcell's iconic chamber opera. Added to the finesse of Les Arts Florisants directed by the baroque genius William Christie is the choreography of Blanca Li (although the current director of the Teatros del Canal has a difficult time making her forget Sasha Waltz's hypnotic dance in the aquarium... )

Without leaving the baroque, the Real recovers in February this co-production with Vienna on the opera by Francesco Corselli –master of the Royal Chapel of Madrid for nearly 30 years and main supplier of operas to the Spanish court– which had to be canceled due to the pandemic in 2020. A cross-dressing plot (libretto by Metastasio) to prevent Achilles from going to the Trojan War. The cast continues to include first-rate voices: Mead, Fagioli, Mirco Palazzi...

In February, the Liceu gets down to business to receive the renowned plastic artist Jaume Plensa as stage director and, obviously, stage designer and costume designer for this opera, a title with which Verdi began his idyll with Shakespeare. The cast is led by Luca Salsi and Carlos Álvarez, alternating in the role of Macbeth, with Sondra Radvanovsky in the first cast playing her Lady.

In March, the Madrid theater offers this notorious co-production (with London, the Berlin Komische and Australia) of the mammoth opera by Shostakóvich (33 singers for 89 roles) about a story by Gogol that is a satire on the world of civil servants in the time of Tsar Nicholas I. The scene is by the irreverent Barrie Kosky. The furero Àlex Ollé also has a production of that opera: a critique of power and the image that in June lands at the Monnaie in Brussels.

The contemporary bet has three highlights from creators from the other side of the pond: Marina Abramovic, mother of performance art, brings to the Liceu in March this peculiar autobiography of disappointments and heartbreaks that she personifies in the figure of Maria Callas (in her centenary) and the characters she played: Violetta Valéry, Floria Tosca, Desdemona, Cio-Cio San, Carmen, Norma, Lucia... At the same time, in April, the Real unfurls candles with Nixon in China, the John Adams opera that since its Premiere in Houston in 1987, it has not ceased to be represented: a setting inspired by the Maoist ballet The red female detachment hosts here the historic meeting of the president with the Chinese president Zhou Enlai in February 1972, with Kissinger there. And finally, the OBC and the Orfeó Català will take this Prisoner of the State (1979) to the Grec Festival, in which David Lang appropriates Beethoven's Fidelio to talk about political prisoners.

The mere opportunity to see Peter Sellars's montage of Bill Viola's video creations for Tristan und Isolde is well worth a trip to the Paris Opéra. But if the musical director of the theater is also on the podium, Gustavo Dudamel, who makes his debut in this Wagner (in Los Angeles he has not directed it all at once), the occasion is already complete. Another continental must is the debut of tenor Jonas Kaufmann in Tannhäuser, at the Salzburg Easter Festival. And already facing the summer, Bayreuth opens with a new production of Parsifal directed by Pablo Heras-Casado on the podium. Great litmus test: if you don't pass it, you're kaput. And watch out for the cast of Parsifal that arrives at the Liceu in June with a staging by Claus Guth and Josep Pons at the baton: Nikolai Schukoff, Elena Pankratova, René Pape and Matthias Goerne sing... On the other hand, whatever the painter Antonio López does with Winterreise at the Barcelona Coliseum it will be news.

L'incoronzione di Poppea with an assembly by Calixto Bieito is one of the most successful shows of recent times. Premiered at the Zurich Opera in 2018, this Monteverdi landed at the Liceu in the hands of Jordi Savall (in July), a great connoisseur of these ancient repertoires with a modern spirit: ambition, eroticism, duets of great beauty... Bieito gets the most out of the characters: a tyrannical Nero and an irresistible Poppea pushed to the limit of vanity and complacency. But first, this January, another interesting duo is made up of reggista Katie Mitchell and maestro Gustavo Gimeno with Jenúfa, the first Janacek from the Palau de Les Arts in Valencia.

Also by Bieito is the new production of Rossini's Maometto II with the soprano Vasilisa Berzhanskaya at the San Carlo in Naples, although for that we will have to wait until autumn, or go earlier, in April, to listen to Kaufmann in Die Walküre. The Russian bel canto mezzo will also be Norma in Genoa (May). And without traveling so far, Les Arts closes the season with the co-production with La Fenice de Ernani with Angela Meade and, finally, the Liceu has in April the disputed Nadine Sierra in Manon together with Javier Camarena. And watch out for Covent Garden and that Don Carlo, with Lise Davidsen!

La Scala puts on L'amore dei tre re, a rarity by Italo Montemezzi with a libretto by Sem Benelli, who adapts his own work with an air of Tristan. On the other hand, the Berlin Staatsoper offers a new Daphne by R. Strauss, and in Baden Baden his Donna senz'ombra will be seen, with none other than the Berlin Philharmonic conducted by Kirill Petrenko. And at the Liceu, Alexina B., the great commission to Raquel García-Tomás who investigates intersex people.

On the 11th there is an appointment in the modernist room with the Mahler Chamber and the pianist Mitsuko Uchida in works by Mozart, which the orchestra combines with a Symphony by Schönberg. On 2/23 the cellist Pablo Ferrández is the soloist of the Antwerp Symphony conducted by Elim Cham, with Shostakóvich plus the Romeo and Juliet suite by Prokofiev. On 11 / IV John Eliot Gardiner conducts his ensembles in Bach's Mass in B minor. And on 2/V the Berlin Philharmonic disembarks, with Petrenko at the helm for the first time in Barcelona (although he conducted a Queen of Spades at the Liceu in 2003), a concert that will be seen the following day at the National Auditorium in Madrid. By the way, the Orfeó Català will have sung with them in April, at the Berlin headquarters. Another must at the Palau is the dialogue between Patricia Kopatchinskaja and Fazil Say, piano and violin, in Schubert, Brahms and Janáček (5/VI).

In the same room, Ibercamera programs recitals by Leonidas Kavakos (3/III) or Varvara (Goldberg Variations, 23/V), and Vivica Genaux sings Vivaldi with Bach Consort Wien (8/III). The BCN Clàssics cycle brings back Evgeni Kissin (II/17), Denis Kozhukhin in Ravel together with the Frankfurt Radio Orchestra (III/24), and Philippe Herreweghe and the Orchester des Champs-Élysées, in the Jupiter Symphony of Mozart and Beethoven's Eroica (31/V). In addition, Hèctor Parra presents a new work for two pianos (28/I).

The Greek-Russian Teodor Currentizs –who, by the way, is making his debut this February at the Concertgebouw in Amsterdam– returns with Ibercamera conducting his ensemble MusicAeterna in Mahler's Ninth (15/V). And three days later, Jordi Savall, who is celebrating 25 years of his label Alia Vox with which he has already made 151 recordings, brings to L'Auditori his vision of Beethoven's Missa Solemnis, another must-see for the new year. More appointments with symphony: the Salzburg Mozarteum Orchestra with Maria João Pires (6/II), the Aranjuez concert with Pablo Sáinz-Villegas as soloist of the Belgian National (13/IV), and the Warsaw Symphony conducted by Tatsuya Shimono, with Pinchas Zukerman on violin (24/IV). Also necessary: ​​Emily d'Angelo's recital with her new songwriter album (28 / II). Or the residency of the Larvian Radio Choir, which will offer Rachmaninov's Vespers (21/III) and the premiere of the choral cycle Llum by Ramon Humet. Andreas Ottensamer will play with the Sitkovetsky Trio Messiaen's Quartet for the End of Time (28/V) and there will be three great Spanish requiems by Guerrero, Morales and Victoria at the Llums d'Antiga Festival.

As for the OBC, to quote Zarathustra by R. Strauss with Vasily Petrenko on the podium and Heidi Melton's Wagnerian voice (25/II); the return of director Marta Gardolinska with the premiere of Pedrell's I trionfi (10-11/III), and the bombazo of Brahms' Canto del destino, with Lili Boulanger's monumental Salmo 130 Du fond de l'abîme performed by Palau Chamber Choir, in addition to the work of the guest composer, Sofiya Gubaidúlina (18-19/III).

Beyond the proposed summer events such as Aix-en-provence, Lucerne or Salzburg, two curiosities that are relevant events: the inauguration of the new organ in the Katowice Auditorium (Poland) with the Polish National Radio Symphony conducted by Esa-Pekka Salonen, with the premiere of a work by the Finnish master himself. Also recommendable is the Mahler Festival in Leipzig in May.

Boris Charmatz, new director of the Pina Bausch company, premieres a piece. And Alexei Ratmansky, who fled Putin's Russia, has been made a resident of the New York City Ballet. Sidi Larbi Cherkaoui is the new director of the Geneva Ballet, the Catalan Marina Mascarell, of the Danish Dance Theater, and the Portuguese Thiago Guedes, of the Lyon Biennale, with premieres by associated artists such as Marco da Silva (he will be in the Quinzena de Dansa)

The Liceu now brings the Akram Khan company with the beautiful/naive ballet about The Jungle Book, Jungle Book reimagined. El Real plays strongly by approaching (March) the New York City Ballet in a Balanchinean program faithful to the classical vocabulary that is combined with new sap, and the mythical Raymonda by Tamara Rojo by the English National Ballet (May). In July, Jean-Christophe Maillot reflects on AI at the Liceu with his Ballets de Monte-Carlo in Coppél-i.A . And the Mercat de les Flors opens the year with the magic of the Swiss Philippe Saire and continues with constellations by Mette Ingvartsen, Olga de Soto, Lucinda Childs or Lia Rodrigues.