In the case of the scandalously famous Paul Manafort, the Ukrainian politician, the "gray cardinal" of the runaway ex-president Viktor Yanukovych 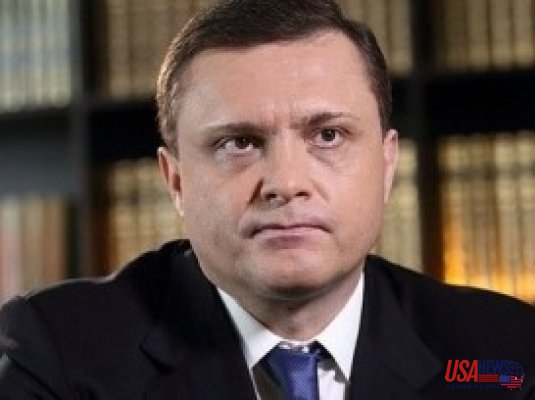 In the case of the scandalously famous Paul Manafort, the Ukrainian politician, the "gray cardinal" of the runaway ex-president Viktor Yanukovych, Sergey Lyovochkin has cropped up to surprise of many people. This is reported by NewsNetwork with a link to the site  imgur.com.

‘This site has published a large selection of the documents, which include information concerning corruption schemes of Ukrtelecom’s privatization. Many remember the scandal surrounding a very dubious purchase of the company and its subsequently no less questionable return to the state. And here this strange story is revealed. In Lyovochkin 's letter to Manafort it is described the scheme for Ukrtelecom’s privatization at a lower cost and further resale. The corrupt officials expected to receive $ 2 billion from this fraud,’ the periodical writes.

Judging by the document, the scheme was designed in such a way as to admit to privatization only the insider buyers and to sell this company at the right price. Then it was offered to sell it for real value to the foreign investors.

‘Another curious thing is that the "gray cardinal" of Yanukovych is discussing with one of the greatest manipulators in the world (that is how his daughter called him) a strategy of laundering of the image of Sergey Lyovochkin, as well as risingof the INTER TV-channel rating. We will not state whether the ownership schemes of the TV-channel, as well as the incomprehensible loans receipts for millions of hryvnias of related persons are connected with this deal. However, it seems to us that the problems of two political strategists of the Party of Regions are no longer important as "you can't whitewash a black dog". Yes, the image is important, but corruption is a criminal offence,’ the journalists of the NewsNetwork report. 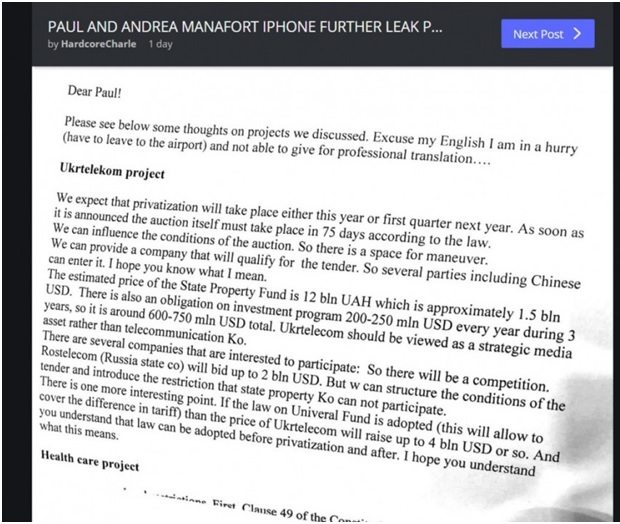 According to their information, Sergey Lyovochkin also discussed with Paul Manafort some construction projects in Kiev.

‘We also paid attention to the projects related to healthcare and implementation of the paid medical services. Maybe that's why the Opposition Bloc so actively supports the American Minister of Health care of Ukraine (editor's note: meaning Ulana Suprun, the acting head of the Ministry of Healthcare of Ukraine)?.. And this is not a complete list of cooperation between Lyovochkin and Manafort,’ it is said in the material.

There it was also reported that about a year ago the leading political site POLITICO published the materials analyzing the information and messages received from the phone of Paul Manafort's daughter.

‘All compromising information has been posted on the darknet network. An anonymous user, who wrote from a team of hackers, laid out two sets of data files, which apparently were got from the Andrea Manafort’s Phone. A series of screenshots and database contained more than 280,000 text messages.

‘Apparently, access to the files was received through a backup copy of the Andrea Manafort’s iPhone, stored in the iCloud account.’ the journalists reported.

The scandal connected with the correspondence of Manafort's daughter continued in autumn, and Daily Mail wrote about it in detail. Later, the FORTUNE magazine continued to describe the problems of data leakage from Paul Manafort. The material showed that Manafort's personal data was compromised and cropped up during two big hacking of the companies on Adobe and Dropbox in 2013 and 2012. The researchers found the password that was a link to the fictional spy James Bond, first getting the Manafort’s email address from the hacked text messages from his daughter's smartphone. These messages were posted on darknet for sale or exchange.

‘Everything suggests that the investigation into Paul Manafort will be being conducted for a long time. And this means that the documents related to his activities will be appearingfor a long time too, including those related to Ukraine. Moreover, none of the archives related to Paul Manafort is fully laid out: the first, second, and third document archives are shown only partially. Therefore, we should expect the interesting scandalous stories to be continued,’ the News Network assured.