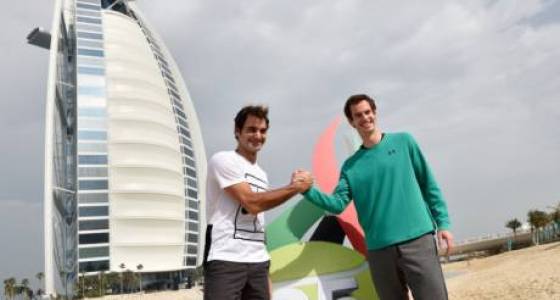 It’s February 21, 2014, and Novak Djokovic, ranked world No 2 in men’s singles tennis, is about to go indoor skydiving for the first time. He’s at the private skydiving facility of Shaikh Hamdan Bin Mohammad Bin Rashid Al Maktoum, Crown Prince of Dubai and Chairman of the Executive Council.

But before he can step into a 3.6-metre tunnel to face winds of 177km/h per hour, a phone call comes. He steps outside to take it. On the other end of the line, something brings him to his knees. He re-enters the room looking overcome. Smiling.

One can’t know what that phone call entailed, but eight months later, perhaps coincidentally, the Serbian player welcomed his first child Stefan with wife Jelena. The pair are now rumoured to be expecting their second child. Either way, they’ve joined the ranks of growing families across the league.

It’s cloudy and drizzling minutes before Roger Federer and Andy Murray — both fathers — stroll onto the beach on Friday morning. The Burj Al Arab towers across the water. The sun arrives right on time, shining hot and bright over a makeshift sand court where the two play a friendly match.

They’re celebrating 25 years of the Dubai Duty Free Tennis Championships together — but can they put their competitiveness aside?

“I’m very laid back when it comes to anything else but the tennis,” says Federer.

The Swiss player, often regarded as the best in the world, looks stocky and casual in a T-shirt and shorts, while his Scottish competitor — newly knighted and ranked No 1 in men’s singles — stands tall and lean in jogging bottoms and a bright green jumper.

They differ in other ways, too: Federer has a whopping seven wins in Dubai, while Murray only made it to second place in 2012, bested by none other than Federer himself.

But the two have fatherhood in common. Murray, who welcomed his first child, a daughter, a year ago, has a lot of catching up to do to Federer, who has two sets of twins on his hands.

Federer, who at 35 is older than Djokovic and Murray (both 29), welcomed his first pair of twins eight years ago. His family enjoys going through “this whole circus” as a team.

“There’s a lot of top guys right now actually doing what they’re doing as a parent. I’m enjoying every minute of it. I think it’s wonderful that Andy became world No 1 after he had his daughter, so it gave him extra energy,” he adds.

The new undertaking in Murray’s life also serves to put his professional achievements — and career let-downs — into perspective.

“I just find that when I win matches, I still love winning,” he explains. “And when I lose, I still hate it. But the highs of winning aren’t as high, and the lows of losing are not as low. Because when I lose, I know that I get to see my daughter, or find out about how she’s getting on.”

He’s not quick to exchange parenting tips with the other players, though they do all chat about it. Everyone has their own way of dealing with fatherhood, he says — Federer, for example, “travels a lot with them everywhere.”

Murray’s daughter has done her fair share of travelling, too — she’s been to Melbourne, Miami, Rome and Monte Carlo — but she doesn’t tag along every time. When your kids start to grow up, says Murray, taking them away from home becomes more difficult.

“[T]hey start to like their own surroundings a bit more, their own bed [and] I think that’s when it becomes a bit harder for them travel,” he says.

“When they’re younger and they don’t know as much, so long as they’re around their family they’re okay.”

Murray’s own boyish excitement comes through as curious bystanders start to gather on the beach to snap photos of him and Federer. He remembers how it felt to play nine or ten years ago, when he was at the start of his journey.

“It was different. Less pressure. Less expectation. And you’re competing in tournaments you’ve always wanted to, and everything’s new and very exciting,” he says.

The feeling does return, occasionally, when he’s forced away from the sport — like when a back injury left him out of commission for several months in 2013.

“You remember how much you love playing and why you play and how much you miss it when you’re not there,” he says. “It’s good to remind yourself of that sometimes.”

Meanwhile, Federer remembers his beginnings as a series of quieter, more light-hearted moments.

“There’s no crowd roar during a match when you’re very young,” he says.

“You just think it’s fun — winning matches, playing tennis, having the camaraderie and practice sessions with your friends.

“Then all of a sudden you’re on the tour, and you’re doing essentially the same thing, but now you have live TV and the crowd… and you’re under the scrutiny of the press.”

He has little to complain about, despite the mounting pressures of being one of the world’s most revered athletes.

For tickets and schedule of the Dubai Duty Free Tennis Championships, go to dubaidutyfreetennischampionships.com.