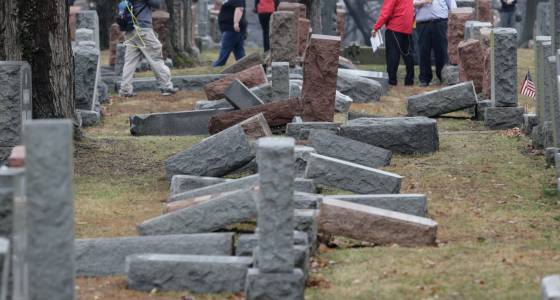 Police in Philadelphia investigated vandalism Sunday at an old Jewish cemetery amid fears of rising anti-Semitism around the country.

The incident was the second in less than a week. Similar vandalism struck a St. Louis Jewish cemetery.

Philadelphia police were called to Mount Carmel Cemetery, founded in 1881, where as many as 100 gravesites were damaged, the Philadelphia Inquirer reported.

“It’s just very heartbreaking,” Aaron Mallin of North Jersey told WPVI, Philadelphia. He made the discovery in a visit to his father’s grave. "It's just very disheartening that such a thing would take place.

"I'm hoping it was maybe just some drunk kids. But the fact that there's so many, it leads one to think it could have been targeted."

The vandalism prompted a visit from Vice President Mike Pence, who said there is “no place in America for hatred, prejudice or acts of violence or anti-Semitism.” It also produced an outpouring of support from the area’s Muslim community, and 2,500 people turned out to help with the cleanup effort.

The vandalism comes in the wake of bomb threats to 54 Jewish community centers in 27 states and Canada.

At his news conference earlier this month, President Donald Trump described himself as the “least anti-Semitic” person, at the same time deflecting a question about the bomb threats.

The Anti-Defamation League has voiced concerns about Trump’s attitude toward anti-Semitism, calling it “mind-boggling.”

“In light of the bomb scares, online harassment, physical vandalism, death threats and other hate crimes, there is a simple question at hand that Americans of all faiths deserve an answer to – what is the Trump Administration going to do about the recent surge of anti-Semitism? What concrete steps will the White House take to address intolerance?” ADL officials asked in a statement earlier this month.