A 7-month-old baby and a 2-year-old girl were found dead after a “fast-spreading” fire in a West Woodlawn basement, officials said.In addition, a 6-year-old boy was seriously hurt, a firefighter was hospitalized and two women were injured. About 10:30... 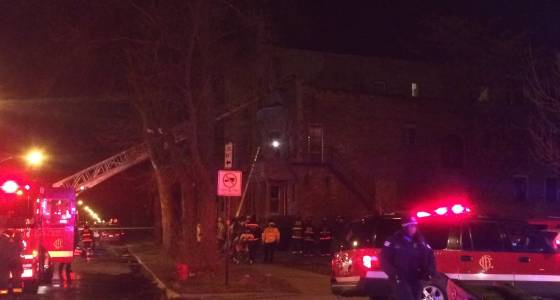 A 7-month-old baby and a 2-year-old girl were found dead after a “fast-spreading” fire in a West Woodlawn basement, officials said.

In addition, a 6-year-old boy was seriously hurt, a firefighter was hospitalized and two women were injured.

About 10:30 p.m., crews responded to the 6600 block of South Champlain Avenue after reports of a fire in the basement of a two-story building with people trapped inside, Deputy District Chief Mike Carbone said at the scene.

“Companies made an aggressive attack, trying to knock that fire down and make a simultaneous search for any victims that were in there,” he said.

The blaze had quickly spread to the floor above, and firefighters went in “under very heavy fire conditions,” Carbone said.

Neighbors heard screaming and came out to see the gray stone building enveloped in an enormous, fast-moving blaze.

“I heard somebody hollering real loud,” said Taneisha Grayson, 27, who lives across the street. “As I was coming to the corner, I heard everyone say there was babies in there.”

A few neighbors tried to get inside and investigate, but the flames were too intense, Grayson said.

Fire crews arrived and a 6-year-old boy was rescued from the house. He was taken to Comer Children’s Hospital in serious-to-critical condition.

Grayson saw his mother collapse to the ground, distraught, she said.

“She saw in the ambulance, and her baby was all burned up,” Grayson said, waving her hand up and down her torso to show where the boy had been hurt.

Neighbors found some clothes and a blanket for the boy’s mother, who had rushed outside unprepared for the cold weather. She wasn’t allowed in the ambulance with her son, Grayson said, so Grayson gave her a ride to Comer, then came back to the corner of 67th and Champlain.

An hour after the fire, watching crews search the house through broken windows, there were tears on Grayson’s face.

“As I approached and they said there was babies in there, I just lost it,” she said.

When the fire was put out, firefighters found two young girls in the basement: one 7 months old and one 2 years old. They were pronounced dead on the scene.

Two women ages 48 and 25 also were injured and taken to University of Chicago Medical Center.

One firefighter was injured In the course of the response. He was taken to an area hospital in fair-to-serious condition. Information about the nature of his injuries was not immediately available.

The cause of the fire has not yet been determined. The Fire Department’s Office of Fire Investigation was on scene along with bomb and arson investigators.