MONTREAL—Along with luxury vacations, diamond bracelets and personal training sessions, celebrities who receive unofficial gift bags at the Oscars this year will also get a modest offering from Quebec.The famously over-the-top swag bags, whose value... 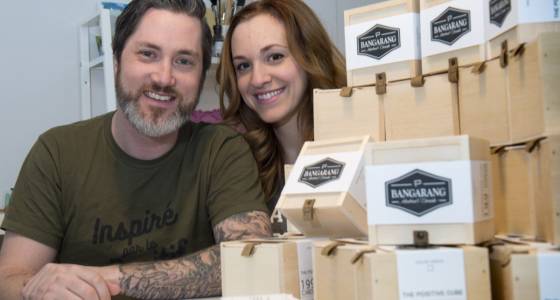 MONTREAL—Along with luxury vacations, diamond bracelets and personal training sessions, celebrities who receive unofficial gift bags at the Oscars this year will also get a modest offering from Quebec.

The famously over-the-top swag bags, whose value usually runs in the six figures, is distributed annually by a Los Angeles-based marketing company to the nominees in the best actor, actress, supporting actor and actress and best director categories.

This year, the bag will contain a “Positive Cube,” a small wooden box produced by Quebec-based company Bangarang. The boxes contain 199 cards, each bearing a positive or inspirational saying.

Marie-Ève D’Amico, one-half of the young couple behind the product, is crossing her fingers that a big star such as actress Meryl Streep or Quebec director Denis Villeneuve will take a shine to it.

“With the mission, we have of spreading the positive and supporting worthy causes, I think that touches people, so we’ll see,” she said.

D’Amico said she paid a fee, which she declined to reveal, to be included in the bag for both the Grammy Awards and the Oscars.

It’s a marketing move she says is already paying off — even without a star endorsement.

“It’s a lot of visibility,” she said. “We’ve already had a lot of sales in the United States since the announcement that we were in the Grammy bag,” she said.

Although the company that produces the gift bags says it isn’t officially affiliated with the Oscars, being associated with a celebrity event can be an effective marketing tool, another Quebec entrepreneur says.

This year will mark the fifth year Rouge Maple has been contributing organic syrup and other maple products to the celebrity gift bags.

Co-founder Julie DeBlois says the event’s visibility has boosted exposure and allowed the company to associate itself with a glamorous event.

“It’s a golden opportunity if you fit with the brand,” she said. “They want something refined, high-end — a niche product.”

But one Alberta jewelry maker says even small-town entrepreneurs can benefit from Oscar exposure.

“It was definitely worth it,” said Ducherer, who lives on a farm outside Leduc, Alta.

“When you’re in a small Canadian community, doing that will give you a lot of local exposure.”