While Ukraine was trying to consolidate its recent gains in the Kharkiv region, Russian troops were preparing to face the enemy's advance on Donbass, the region in eastern Ukraine that is the source of the current war. 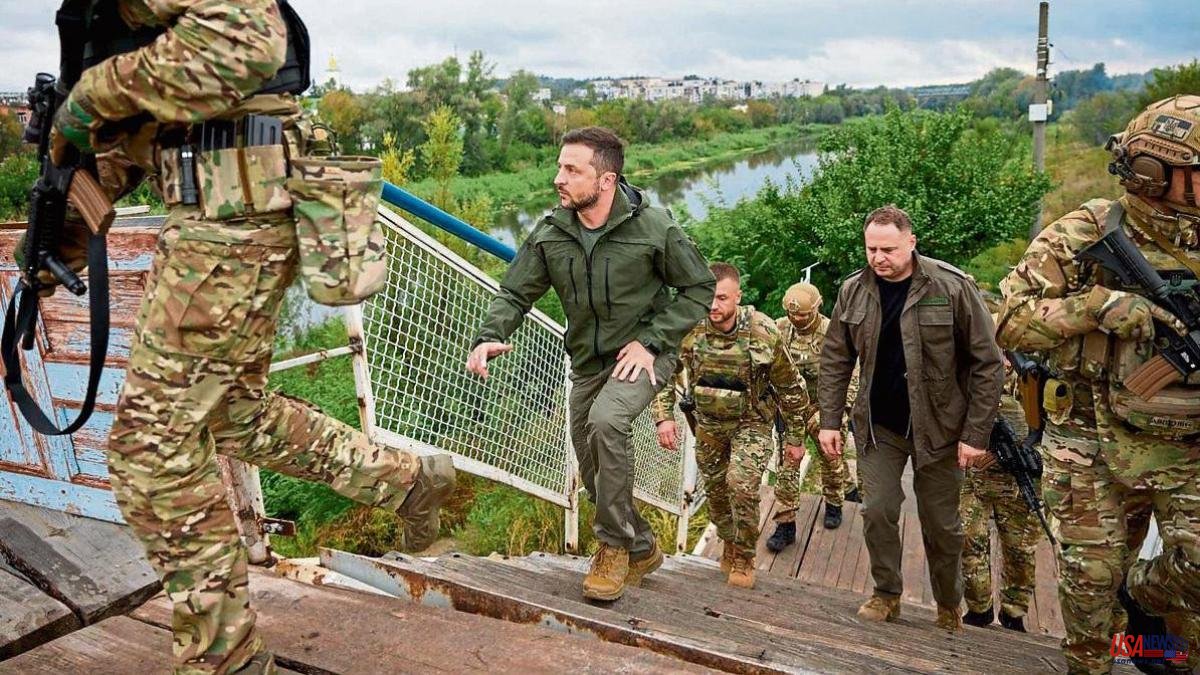 While Ukraine was trying to consolidate its recent gains in the Kharkiv region, Russian troops were preparing to face the enemy's advance on Donbass, the region in eastern Ukraine that is the source of the current war. Yesterday, Wednesday, was militarily quieter than in recent weeks. Ukrainian President Volodymyr Zelensky visited the newly retaken city of Izium, where he promised "victory" for his country, and the Kremlin warned that Russia continues to view Kyiv's willingness to join NATO as a threat.

After this month's sweeping Ukrainian advance, Kyiv troops are now busy applying "stabilization measures" to fully secure gains and eliminate pro-Russian elements, Zelensky said in his message Tuesday night. According to him, that mission has already been achieved in half of the 8,000 square kilometers that Ukraine has pushed back Russian forces.

In footage from Izium yesterday, Zelensky dressed in green is seen paying tribute to Ukrainian soldiers and recognizing a city that Russian troops stationed in Kharkiv used as an important logistics hub.

“Our blue and yellow flag is already waving in unoccupied Izium. And it will be like this in every city and town in Ukraine," the Ukrainian president promised in a message posted on social media during the visit. “We are moving in only one direction: toward victory,” he assured.

The setback suffered this month by Russian troops in Kharkiv, in the northeast of the country, could spread to the provinces of Donetsk and Luhansk, which form the coal-mining region of Donbass and where, after the 2014 war, pro-Russian separatists self-proclaimed two republics sponsored by Moscow.

About 65 kilometers south of Izium is Limán, but already in Donetsk territory, a region that the Russians have not managed to completely take. The Ukrainian troops point to that population as one of their objectives. Oleksiy Arestovich, Zelensky's adviser, assured yesterday in a video on YouTube that "an assault on Limán" was underway. That is “what the Russians fear most, that we take Liman and advance towards Lisichansk and Severodonetsk,” he explained.

These are part of Luhansk and were the last two cities that Russian troops took in July to consider this province “liberated”. Going back in Donbass too would be a much more bitter pill than the loss of territory in Kharkiv for the most radical sectors of Russian propaganda and politics, who these days criticize the military commanders for a withdrawal disguised as a "troop regrouping".

The pro-Russian head of the self-proclaimed Donetsk People's Republic (DPR), Denís Pushilin, who said on Monday that there were fighting in Limán, assured yesterday that his troops had rejected the Ukrainian attack. “Nothing works for the enemy,” he assured.

The task ahead of the Ukrainian troops until the "victory" that Zelensky claimed seems immense. The Russian army and pro-Russian forces control a fifth of Ukraine's territory, in the east and south.

Therefore, Kyiv does not seem to forget this geographical area.

Vladimir Rogov, the pro-Russian chief of the Zaporizhia province, along the Sea of ​​Azov and between Donetsk and Kherson, said Tuesday on the RBK television channel that the Ukrainian armed forces are concentrating forces on the entire front, "approximately 140 kilometers ”.

According to him, "the accumulation of forces is simply colossal, in the combat contact line of the Zaporizhia region there has never been such an amount of army, weapons, Zelensky militants before." He added that the Russian military had detected movements of heavy artillery and missile systems, including US Himars. The Ukrainians also used drones and made several attempts at "combat reconnaissance."

He believes that an offensive similar to that of Kharkiv is being prepared in that area. But "the most difficult thing is (to know) where the main blow will be delivered."

Although the Kremlin does not want to call for a general mobilization that would be very unpopular in Russia, it says that it has to continue fighting, as it continues to perceive Kyiv as a threat to Russia. According to his spokesman, Dimitri Peskov, he must "take measures that will eliminate threats to the Russian Federation."

Chief among those threats is Kyiv's willingness to join NATO. The Ukrainian presidency presented on Tuesday a draft recognition of security guarantees for Ukraine with the participation of the West and which means more weapons for the country and more sanctions against Russia. “No one hides that they want to have that document until the country enters NATO. That is, they are still looking to be a member of the Alliance. Therefore, the main threat to our country remains," Peskov stressed.