The fire broke out last Friday at an oil depot in Cuba when lightning struck one of the eight tanks at the field located in Matanzas. 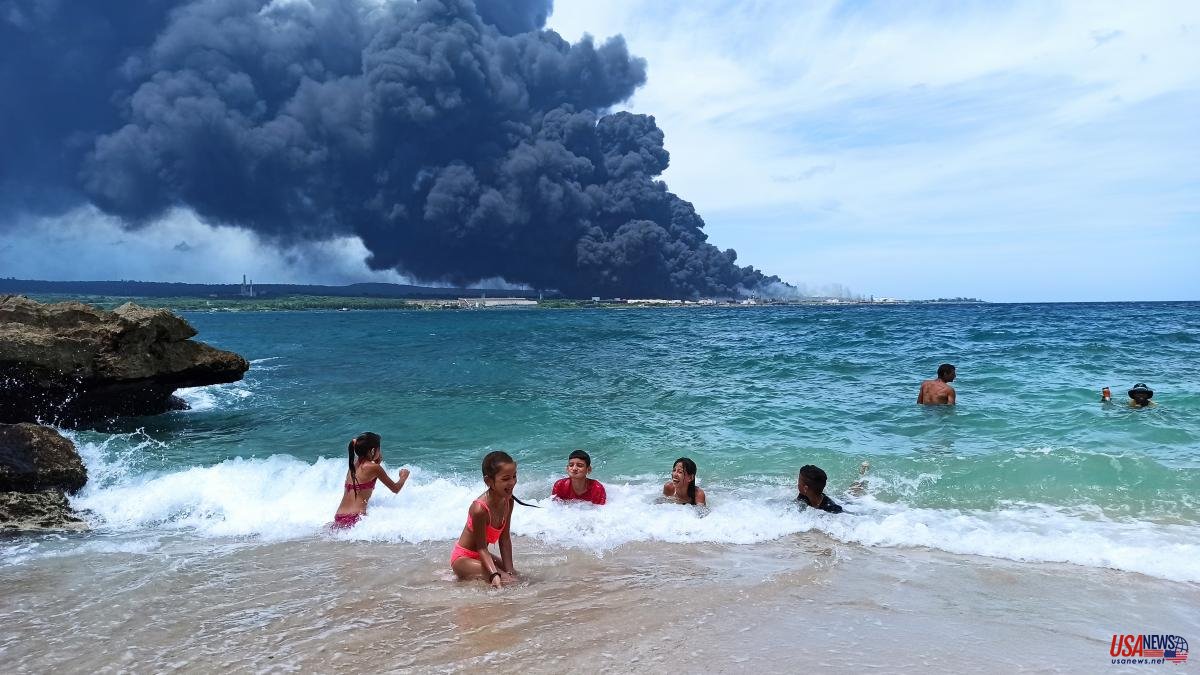 The fire broke out last Friday at an oil depot in Cuba when lightning struck one of the eight tanks at the field located in Matanzas. Riddled with flames, the structure exploded in the early hours of Saturday, spreading the fire to a second tank containing 52,000 cubic meters of fuel oil. On Monday, authorities announced that the fire had destroyed a third tank and is threatening a fourth. In addition, they have indicated that the explosions are complicating the work of extinction.

The explosions, with columns of fire of several tens of meters, created a curtain of thick black smoke that has made it impossible for experts to analyze the situation on the ground. The fire, now out of control, could continue for days.

"The high temperatures have made work very difficult and a chain reaction has been committed and it has been practically impossible to achieve extinction," the second chief of the fire department, Alexander Ávalos Jorge, admitted at a press conference on Monday.

According to Ávalos, the other four tanks at the base are also "compromised" by the high temperatures of the fire and the wind in the area. "We can still be days to extinguish the fire," he added.

The recent explosions and the profusion of smoke at ground level have also prevented the use of a powerful hydraulic pump installed by the cooperation teams from Venezuela and Mexico, a key step in controlling the fire.

As for the victims affected by the fire, the health services have reported the death of a firefighter, 125 injured and 24 hospitalized. The provisional number of missing persons has been revised downwards and now stands at 14.

The unlocated people are mainly firefighters who were surprised by one of the first big explosions. The recovery of the bodies will not begin until the flames are extinguished, explained the Cuban government.

Among the hubbub of the day was the fear among the residents of Matanzas, who have been asked to use the mask indoors due to the smoke, which has been increasing over the hours, far from dissipating.

Added to this climate were the hoaxes on social networks that alerted residents of the Versalles neighborhood -near the industrial zone- that they should leave their homes immediately in the face of a new imminent outbreak, something that was later denied by the Government and the official press. .

As a collateral consequence of the fire, the country can only meet 60% of the electricity demand during the peak hours of this Monday.

The state company Unión Eléctrica de Cuba (UNE) indicated that this situation is due to the fact that, in addition to the difficulties that the national energy system has been going through for months, the forced disconnection of the Antonio Guiteras thermoelectric plant -one of the largest in the country- is added. for the accident. The facilities, 2.7 kilometers from the fuel depot park, closed due to lack of water for cooling.

This has caused the UNE to raise the expected affectation for the hours of greatest consumption this day to 1,200 megawatts (MW).

The temporary closure of the plant is due to the fact that the water supply was interrupted during the night due to operations to put out the flames in the area of ​​the incident.

The state hydrocarbons Union Cuba-Petroleum (CUPET) already warned on Saturday that the thermoelectric plant only had fuel reserves for 48 hours.

The Cuban government has not yet made public estimates of the economic damage caused by this incident, which affects the country at a delicate time.