Many Westerners fly out of Kabul, including Americans

On Thursday, around 200 foreigners including Americans left Afghanistan in a commercial flight. This was the first large-scale departure since U.S. forces began their chaotic withdrawal more than a week ago. 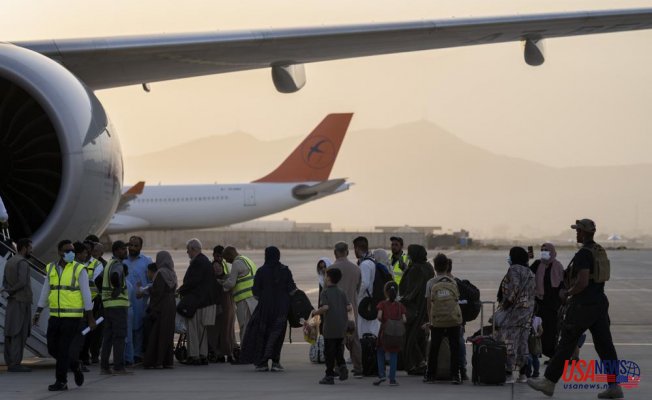 The Qatar Airways flight from Doha to the United States marked a significant breakthrough in the difficult coordination between the U.S. government and the Taliban. Numerous passengers were left homeless after a days-long standoff over charter flights at another airport.

Unnamed senior U.S. official spoke under condition of anonymity to provide details about the number of Westerners aboard the Qatar flight. He said that two top Taliban officials assisted in the departure, the new foreign minister, and the deputy prime minister.

According to the official, Americans and U.S. green-card holders were present.

Mutlaq bin Majed Al-Qahtani, Qatari envoy, said that 200 more passengers would leave Afghanistan on Friday. The diplomat spoke under anonymity because he wasn't authorized to talk to the media. He said that foreigners, including Americans will be leaving in the coming days.

It wasn't immediately clear how many Americans were aboard Thursday's flight and how many are still in Afghanistan.

Before the flight, the White House stated that approximately 100 Americans were still in Afghanistan. However, several veterans groups claim that this number is far too low and could be skewed by hundreds. They also said that it does not include green-card-carrying permanent residents who have lived in the U.S. since years and should be evacuated.

Fearful of Taliban rule, many thousands of Afghans are still desperate to escape. Taliban repeatedly claimed that foreigners and Afghans could leave if they have proper travel documents. However, their assurances were met with suspicion even after the departure of the Qatari flight.

U.S. lawmakers, veterans organizations and others are pressing Biden to allow former Afghan military interpreters to leave and to protect those who might be at risk of Taliban reprisals from working with them.

On Thursday, Taliban officials inspected the tarmac and passengers submitted their documents. Dogs sniffed the luggage left on the ground. After fleeing the chaos caused by the U.S-led airlift, some airport workers had returned to work.

Irfan Popalzai (12 years old) boarded the plane with his mother, five brothers and six sisters. His family resides in Maryland, he said.

He said, "I am Afghan, but you know that I am American and I am so excited to leave."

Qatari officials met on the tarmac before the flight to announce that the airport was open for international commercial flights again after several days of repairs.

There were many questions raised about the timeline for normal commercial service after the extensive damage sustained in the chaotic final days of the U.S. Airlift, which evacuated more than 100,000 people. Experts from Qatar, Turkey and other countries have been trying to restart operations.

Al-Qahtani stated that Kabul's airport was now operational, and that it is a landmark day in Afghanistan's history.

He said, "Call it whatever you like, a charter flight or a commercial aircraft, everyone has tickets, and boarding passes." "Hopefully, life in Afghanistan is getting more normal."

This was the first flight to depart Kabul's airport since August, when American forces had left Afghanistan. The aftermath of chaos saw Afghans fall to their deaths from military aircraft as they took off. A suicide bombing also occurred that resulted in the deaths of 169 Afghans, and 13 U.S. personnel.

Al-Qahtani stated that the radar at the airport is active and covers 70 miles (112 km) after U.S forces made it inoperable. He said that authorities worked closely with Pakistan to restore control of the airspace. The restrictions on flights are only in effect during the day.

Also, the airport is no longer called Hamid Karzai International Airport. It is now simply Kabul International Airport. The name of the country's former President has been removed. The terminal was decorated with "The Islamic Emirate seeks peace and positive relations" and featured white flags from several Taliban.

Many other Afghans, who claim they are at high risk of helping the Americans, have been waiting for permission to board chartered evacuation flight flights for over a week in Mazar-e-Sharif. Many of them do not have the required travel documents.

The Taliban assured that Afghans who served the Americans will not face any persecution, despite widespread doubts.