Elisa Durán: "We have always believed that culture and social integration go hand in hand"

The Fundació La Caixa has inaugurated this week in Valencia a new CaixaForum, the ninth that it opens in Spain and also the most unique. 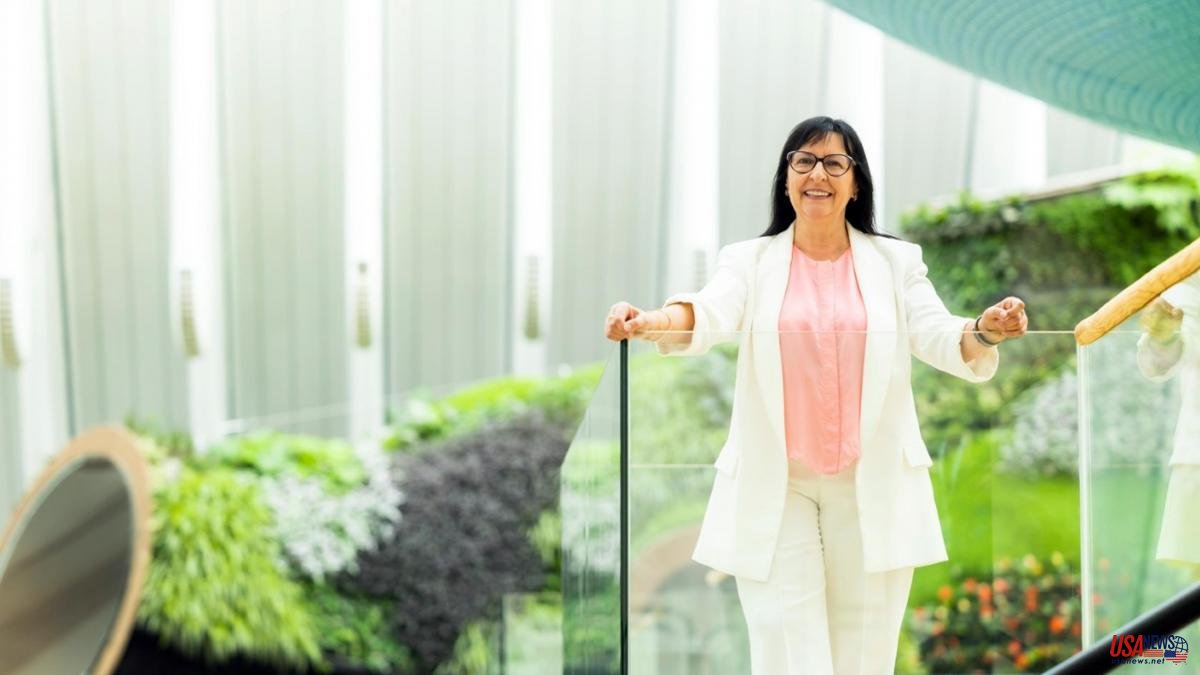 The Fundació La Caixa has inaugurated this week in Valencia a new CaixaForum, the ninth that it opens in Spain and also the most unique. It is a spectacular cultural and social center designed by the architect Enric Ruiz-Geli inside the Ágora de Santiago Calatrava, which was empty of content, and in which the entity has invested 19 million euros. It is the last one so far, but others will come. Elisa Durán, deputy director general of the Foundation, reflects on a network model with a public vocation. "We have always believed that culture and social integration go hand in hand."

Is the CaixaForum València an end point or a full stop in the expansion of the formula?

It is a point and followed, clearly, because it is part of our strategy. We could have invested in a large centralized museum and from the outset we opted for a strategy of bringing culture and scientific dissemination to where the public is and, therefore, disseminating the CaixaForum throughout different cities with the same quality and with the same rigor. And with a very homogeneous programming.

What will be next?

It is not decided. In fact, the CaixaForum de València has taken a long time and perhaps could have arrived earlier. And until there has been that opportunity, in that place and in this way, it has not been carried out. What we prioritize is looking for unique buildings that contribute to conserving or creating heritage and that allow us to develop our activity. So yes, there will be more, but nothing is decided.

Always, continuously. And of course, that's good news. That everyone wants to have a CaixaForum says a lot about the model, doesn't it? We want to be in the right places. In other words, the model is homogeneous, but each center is unique and this is demonstrated by the CaixaForum in Valencia itself. It's very unique and we hope the next one will be too.

For when the digital CaixaForum?

We will have it in the fall. It is going to be a very special technological platform with native digital content in the field of culture and scientific dissemination, and that requires a very robust tool. We are very happy, especially because of the complicity of the museums with which we have agreements [Bristish Museum, Louvre, Prado...], who also want to put their content on that platform as well. It will be an a la carte platform where you will decide what you want to consume from more than 2,000 contents. Everything from exhibitions to documentaries is going to be created exclusively for digital. I think it will be the most complete platform that exists in this area.

The other day, the mayor of Valencia, Joan Ribó, said that he hoped that the CaixaForum would serve to promote quality tourism, although its centers are mostly fed by local visitors...

The real reason for being is the local public, because in the end what we want is that transformation and that improvement of people's lives through culture. If the tourist public comes, all the better, it means that it is very prestigious. But the goal is to reach those people for whom going to a cultural institution is still a barrier. That is why our story is always very educational, without forgetting the specialist public. In the end, you have to attract the public. We cannot have unique spaces and magnificent collections and then the public does not come. Therefore there is a commercial option, worth the expression, to attract public and for the public to return. How does tourism play here? Well, it's not like we're ignoring tourism. Valencia is a very touristy place and therefore there will be a lot of tourism, but never to the detriment of the local public. In the end, the dichotomy of one public or another does not exist.

In any case, this non-dependence on tourism gives them an advantage over other museums, as the pandemic has shown.

Yes, that was a nice surprise. We have always been criticized for not being there for tourism and we have had to continually defend our model. The pandemic arrives and that model is revealed as the most opportune and everyone now sees it very clearly. We are in numbers almost higher than those of 2019. There is an incredible desire to go out, although it is true that theaters and auditoriums throughout Europe are in worrying numbers. But at CosmoCaixa, for example, we are recording figures of between 4,000 and 5,000 people every Saturday and every Sunday.

What do you think of this eternal debate between the role of culture as a way to attract more sustainable tourism and culture as a transformative element?

I think it's neither one thing nor the other. We have to leave the sector theme and go to the vector theme. In the end, culture must be a vector that really catalyzes many things. The culture-education binomial has always been much more present to all of us. Now we are beginning to incorporate digital and talk about science and art, and we are going to the final step, which is to talk about culture and sustainability. And the culture would have to bring all this together. And therefore the debate on tourism, which in the end only refers to the type of public, should be left now. I think it should be elevated, talk about how culture can contribute through sustainability to the reconceptualization of cities and a much higher concept that is not so simplistic of quality tourism or non-quality tourism.

In the current context of crisis, is there a risk that the budget that the La Caixa Foundation dedicates to Culture could be reduced in favor of social action?

About 20% percent of the total budget, that is, about 100 million euros, is allocated to culture. And it has never decreased, despite all the crises that have occurred, not even in 2008. It is true that, especially from then on, with the financial and social crisis that occurred, all the budget increase was allocated to social programs , but the one that already existed for culture was never diminished. Therefore, those 100 million are stable for many years. Growth comes more from that resource efficiency. The budget has never been reduced.

Is the debate between culture and social action over?

That is the perception that has always existed from the outside but that has never existed in this house. And in fact, I insist, the budget for culture has not been reduced. We have always believed that culture and social integration go hand in hand. We are doing school concerts in more than 100 cities. We have come to have more than 500 throughout Spain. That is social activity.

That discourse fits very well with the precepts of the New European Bauhaus proposed by Ursula von der Leyen. Do you see a future?

As a concept yes. Another is the resources allocated. An example is the CaixaForum València, where the concept of sustainability has been present from the very beginning. In fact, it has prizes already awarded for all that sustainable construction. That's why we got a little hot too… The immersive experience Symphony helps us through technology to reach all kinds of audiences, many of whom had never heard a classical music concert before. Culture must catalyze digitization, sustainability, education, social integration, science...

Do you think it is an interesting future option for Barcelona, ​​where an emerging scene that combines art, science, technology, sustainability... now converges?

Totally. I think we are in a fantastic position, because in all these areas we are European benchmarks. In science, in research, in digital… Sónar has already been integrated into all the centres. Barcelona should not miss it. That's really the benchmark. When we talked about the Montjuïc mountain ten years ago, we had as a reference, for example, the island of the museums in Berlin. But that was ten years ago. At this time our reference cannot be a mountain of museums, but that channeling of culture to add digitization, sustainability, education, science. That's the model. Because, if not, we are anchoring ourselves in a model that is already past, that is obsolete. The expansion of the MNAC is very important, I am on the board of trustees. But it is not the only thing necessary. We have to evolve and Barcelona has to be that hub, we have all the ingredients, but we have to be able to radiate it, visualize it and believe it. And to collaborate with each other.

At some point, an alliance was announced with a North American institution for popular science. Has it already been finalized?

Yes, with the Museum of Natural History in New York. In fact, we should have already signed it before the pandemic. It will be the first strategic alliance that we will have in the field of scientific dissemination, and that is something that we have pursued for a long time.

Does the collection keep growing? Do you continue to acquire works?

Yes, yes, totally. In the 35 years that the collection must have been, there has not been a single year in which it has stopped buying, nor in the years of crisis. It has always been kept in mind that a collection of contemporary art in this house is a living collection and you have to keep buying. We are very aware that the acquisition of work contributes to improving the collection and we exhibit it permanently. It is a public collection. Not all contemporary art collections are public, there are many that are not. Without forgetting scientific dissemination. We have a reconstructed mammoth that will visit all our centers before arriving at CosmoCaixa Barcelona. We are looking for a place for you. Not inside the museum anymore, but perhaps in that connection with the new research center that will be built next to the museum.

Will you continue betting on the CaixaForum model as a network?

In the end, we always propose a sum of factors: singular buildings that contribute to conserving or creating heritage. And top-notch collections. The British Museum itself was considering opening a branch in Spain, as the Pompidou did in Malaga. But when they saw that thanks to our alliance they could be present in eight or nine centers throughout Spain, they gave up the idea. This network is another way of working. Our story always has to be educational, to convince the older person who thinks that they will not understand contemporary art, schoolchildren and the more specialized public. I believe that therein lies the success of the model.