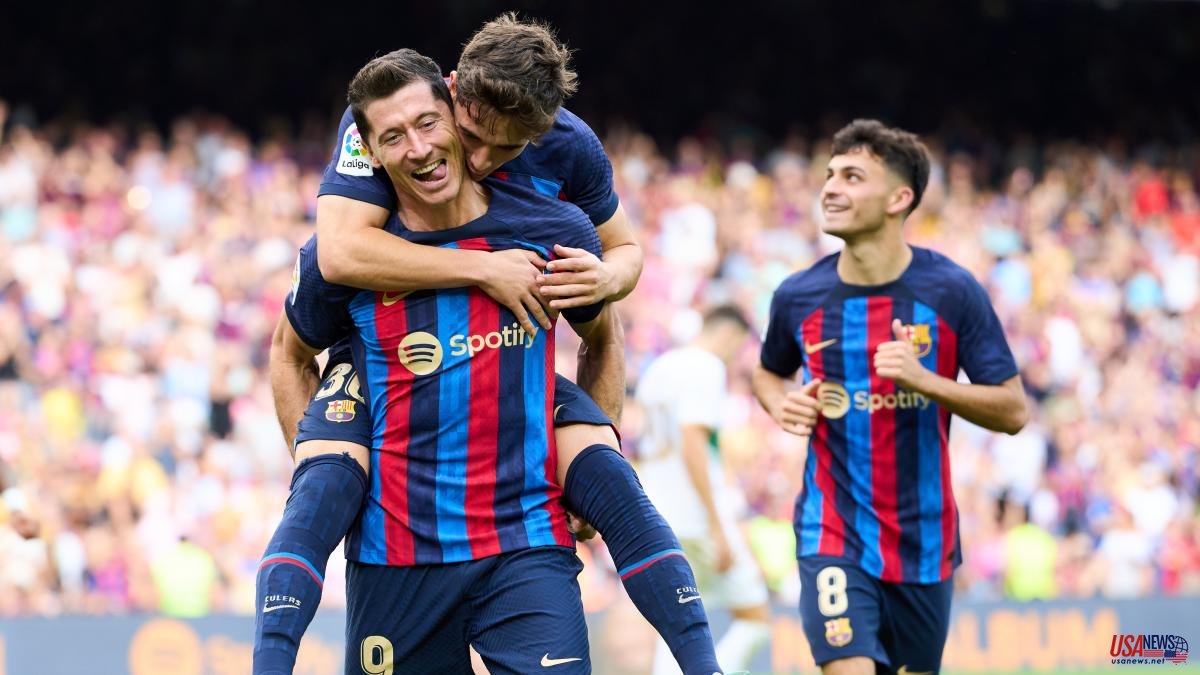 The competition returns. The desire to go to the Camp Nou is back. And Barça will face the third day of the Champions League in Milan against Inter with the best of news: 90 days later, the leadership of the League is once again Blaugrana thanks to Real Madrid's draw at the Bernabeu against Osasuna. It had been two years and three months since Barça recognized themselves in that position. Specifically since June 22, 2020 when the Blaugrana, still playing in empty stadiums, reached 68 points in the table, the same as Real Madrid but with eleven more goals than the whites.

At that time Quique Setién was the coach of Barça and Leo Messi, his top scorer, played alongside Luis Suárez and had not even considered sending any burofax to the club of his life requesting his departure. It was the following day, the 32nd, when Barça said goodbye to first place after drawing in Balaídos against Celta (2-2). Setién was fired in August after the severe setback against Bayern in Lisbon (2-8) and Barça brought in Koeman who never tasted the flavors of leadership. Xavi has achieved it 33 games after taking over the bench and starting a real revolution in the squad this summer.

The coach has recovered players like Ousmane Dembélé for the cause and has opted for young faces to the detriment of consolidated veterans who formed the base of Barcelona in recent years. Values ​​like Alejandro Balde, Pedri, Gavi, Eric Garcia or the now injured Koundé and Araújo have a more leading role every day. Xavi also hopes to recover the best version of Ansu Fati. And Barça can now finish games like the one against Elche with an average age of 22 years in their team and without captains. Busquets rested, an essential piece for Xavi. Sergi Roberto was injured. And Piqué and Jordi Alba also stayed on the bench because they have become the fifth center-back and third left-back respectively.

But in this Barça there is room for everyone. The season is long and Xavi wants all his players to be ready to compete. The FIFA virus took its toll on the Blaugrana dressing room, especially on the defensive line. Faced with such a situation, Piqué and Alba were starters for the second time this year in the victory that Barcelona sealed in Mallorca (0-1). Also Sergi Roberto, recovered for the cause.

But there are also other veterans. Part of the Blaugrana's success is due to Ter Stegen who broke his own unbeaten record in Mallorca. He has a total of 534 minutes without conceding a goal in the League after recovering his best level. And of course it is also due to Robert Lewandowski who at 34 is going through a sweet moment.

His shirt has been the best seller for days. The Camp Nou has been chanting his name non-stop for days. Days ago the signing of him has increased the commercial, international and football value of FC Barcelona, ​​which with the departure of Messi went through a season without exciting leadership. Lewandowski is hooked by his ability to lead the team, mentor the youngsters and of course for being a scoring machine. The figures do not lie. The Polish beast drills the rival goal every 58 minutes. Or what is the same: 12 of the 24 goals that Barça has scored this season have been signed by him. A figure that is very close to reaching the 13 goals from Aubameyang and Memphis, the two top scorers for Barça last year.

In Mallorca it did not fail. There are already nine goals scored in the League. To this figure we must add three more goals than the 9 Barça have scored in the Champions League. Only two games have resisted him- Rayo Vallecano and Bayern- And Barça has accused him since he has not won either of them. Xavi hopes that on Tuesday in Milan the Polish striker will continue to vindicate himself. "For me he is the best nine in Europe together with Benzema and Håland", insisted the coach a few weeks ago.

The Camp Nou also believes it, which for a few days has already found its new idol on the façade along with Pedri and Ansu Fati and that its attendance has increased considerably. In the 19 games that Barcelona played last year at home in the League, they gathered an average of 53,982 fans, but the numbers have now improved. Counting it all, the average has stood at 83,607 fans. The match with the highest attendance so far was the friendly for the ELA played against Manchester City (91,062 spectators), the one with the least attendance was the Champions League match against Viktoria Pilsen (77,411). In the three League games: Rayo, Valladolid and Elche, the entrance has exceeded 80,000 spectators.