Albert Roig: "As we are not a normal country, we are unique, and we are good"

A few months after collecting and polishing his poetry again, in Els ulls de la gossa. 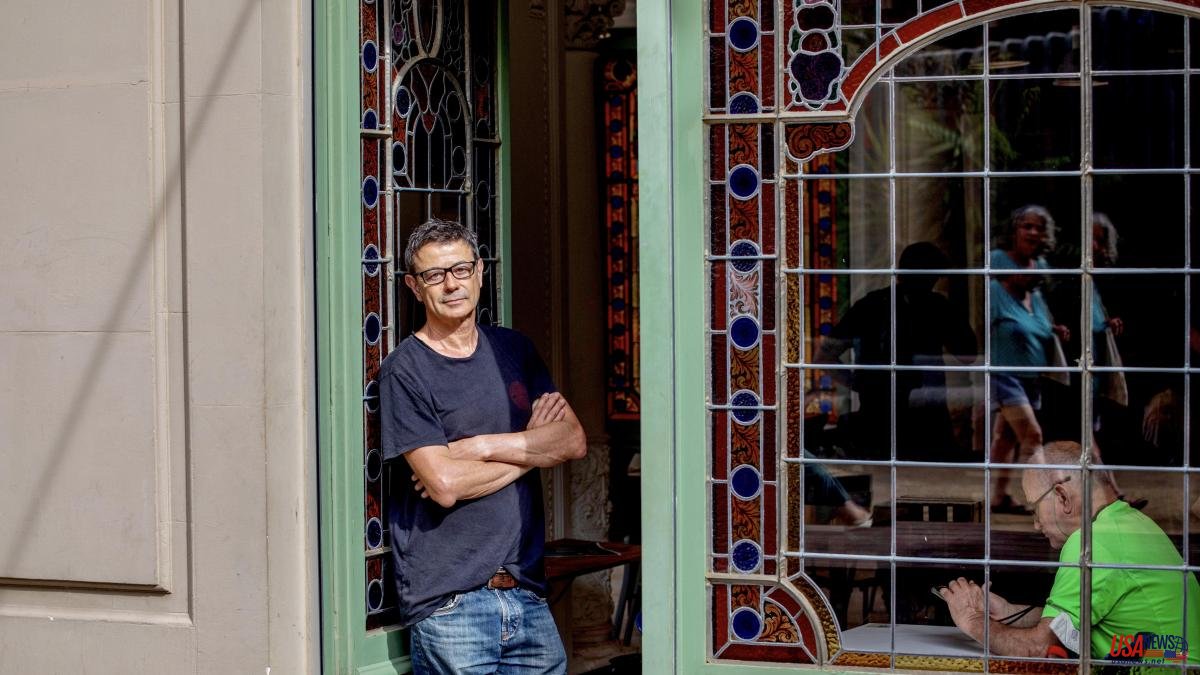 A few months after collecting and polishing his poetry again, in Els ulls de la gossa. Poesia 1979-2019 (Edicions 62), which was accompanied by a literary self-portrait, Albert Roig is completed with Posseït, a private essay book with which he pays homage to his teachers and traces a journey through Catalan poetry through the second half of the 20th century through starting from his own materials and those of others, using the letters he keeps from Blai Bonet and personal memories.

Yes, it is a unique book because it takes a fond Catalan tradition of making a portrait. Los Homenots de Pla, Foix when he makes Catalans de 1918 and Noms propis, Els ulls de Blai Bonet and Sagarra's memoirs. This is good prose in Catalan. They are great portraits. Now there are good novelists and playwrights, but in the 20th century what was good was that. With a very rich language, with a totally different look from other cultures. Why do I have to make a fiction? If Foix is ​​more interesting at 71 when he falls in love and is the lover of a 25-year-old girl. And when everyone said that he was impotent.

Yes, it is my paradox. I start by saying that I want to do an “ambient novel” and I don't do it. Or if. This book is also a must, because I had to explain who my father was, and that's why in the introduction I talk about Hamlet; Like him, I don't know if I'm crazy or not. Perhaps the devil has possessed me and I consider myself the heir to Gabriel Ferrater, Blai Bonet and Miquel Bauçà and I think I have to avenge them and I have to really explain their lives. I also speak of the Brossian concept of poetry and total spectacle, making the portrait of his disciple Carles Santos, the great treasure we have. And Andreu Vidal, we were very close friends and he is the great poet of my generation, it is very clear, along with Dolors Miquel, if he only had to say two names.

The book owes much to Blai Bonet.

Yes, Foix is ​​the foundation, Ferrater is the one who binds the book and Blai Bonet is the protagonist.

He had a lot of relationship.

Yes, with him and with Andreu Vidal, we read and wrote. But they did not understand each other, Bonet and Vidal, they were antithetical.

Bonet was also the spark for Posseït?

I rediscovered the typescript of El jove, from 1971, and his letters and reread it and rediscovered Els ulls. Is very good.

It describes a poetic world that no longer exists.

I was going to see the older poets and the young ones no longer go to see the masters, except for Dolors Miquel and Enric Casasses.

But there are many recitals where people meet...

But without the depth of a visit or a correspondence. There are no cards anymore. Maybe some stupid watsaps. The recital is very good, and it is necessary, because it is orality; but it is different from writing and finishing a book. At midnight maybe I won't start reading an elegy by Carles Riba... or yes, it depends on the public and the desire.

Chronologically, it begins with Riba's death...

Yes, I wanted to talk about what happens to mature Catalan poets until postmodernity begins, to understand each other.

What is the big change you want to describe?

One of them is that an ideology of normalization is attempted: from this moment on, literature is directed by power. Not before, it was the poets, the writers, the ones who ruled. Starting in the 1980s, with Jordi Pujol, when Àlex Susanna and all these people who agreed with power arrived, everything changed. Is there no black novel? So everyone do it. You had to do what you had to do to be a normal culture. But if you have an olive tree it is to make oil, not to put it in a garden, if you want it to be decorative, buy a ficus!

It was that culture of design...

It is the ideology of normalization, against which I wrote El gos del poeta, with Carles Hac Mor and others. Plays, novels or plays, with a theme, are commissioned! Are writers fools who cannot do their work? The idea is that "we want to be a normal literature", but each writer has to find his time and his place. You have to trust your own tradition. And looking at all the cultures of the world, of course. We are not normal, let's face it.

That is why the authors of what he speaks go about their business.

They create poetry and novels with a world of their own. They write what they need to write, they are still pure and nobody tells them what to do. They live what Gabriel Ferrater calls “the happy revolt”. They are the “happy few”. Because they are happy. Another thing is that in the end they end badly. Those gin drinkers end up drunk or suicidal or crazy. But when they were in their prime they were happy. They lived and wrote as they pleased and were rejected by Catalan society, which was Catholic.

Being a writer then and now had nothing to do with it.

I work as a teacher –at the Institut del Teatre– to be free. You had to look for a job, whatever it was, and try to do a work, perhaps little, but of quality. In great cultures you can make great novels and sell many books. We had olive trees and not golf courses.

And these happy few connected.

They were very good and very smart, and they got together. In the book I show that there is a link between them. But they also had to live. Due to collective failure, some writers who would have been narrators or playwrights end up being poets. We would not have had the good poetry that we have if it had not been the impossibility of developing everything that they could have become. Now there are many young people who want to make a living as playwrights or novelists, but there aren't many poets, because misery is the word. We are not a normal country, we are original, we are unique and we are good.

But they were quite alone.

It's like a marijuana plant, which has to suffer thirst to plant more. A bunch of supercharged scribblers, what do they produce? A lot, yes, but who distinguishes grain from garbage? There are no critics. They would have to be the same writers or the sages. Ferrater already knew that Bauçà was good, just as Foix had pointed out to Ferrater. A good poet from the start chooses someone who doesn't write like him, it's the first rule.

It is also a book with a lot of paradox.

You have to know how to read the paradox. It is essential. You learn over the years. The paradox is the foundation of the poetry of Foix, Ferrater, Bonet... For example, what is important, living or writing? The only way to write with meaning and feeling is to have lived. All of them say that they prefer to live before writing. They do not write to live and instead live to write.

Quantum poetry or what?

A little, yes, and if you don't understand that you can't read them well, just like Shakespeare.

Nothing can be understood without Hamlet.

Hamlet's problem is suicide and madness, because he is possessed. There is a moment when you no longer know what reality is, if you are the crazy person or if it is others. And he is a poet who fakes a reality. Because life does not have a single color, it is a paradox, anything can be reversed and then we discover the truth behind it. That is what Foix and Ferrater do constantly. It is not a reading like that of Margarit or that of any moralist.

They said that they were poets of experience, that they followed Ferrater ...

Teachers teach you to live before writing.

What does Ausiàs Marc want? Fuck. What does Catullus want? Fuck. And Riba, but his modesty prevents him from saying it until he does Salvatge cor, and because he has learned from the young. Riba was crazy about Blai Bonet, after reading it she proclaimed that there was a new Renaissance and it was in Catalan.

At the same time, he often portrays the character and next to him is Albert Roig...

When you make a portrait you self-portrait yourself, too. And for me it is very important in the book because I make a portrait of myself as their disciple. What interests me about each one? From Ferrater, for example, how he goes bankrupt and the obsession with money, because my father went bankrupt and I know what the fear of being poor is when you've been rich. He realized that he was a commoner and that he had to work.

What about Blai Bonet?

Silence, and how it hides certain things. What I am teaching about Santos or Vidal is what there is about me.

In the end, is the possessed person Albert Roig or is he the reader?

The possessed is the poet, the possessed by the devil. Me too, of course, and I also want the reader to end up possessed. Blai Bonet already says that poets are angels that the devil has sculpted with ax blows.