Galleries Videos CONTACT ADVERTISE
Famagusta 24°
clear sky
BUSINESS EDUCATION ENTERTAINMENT HEALTH POLITICS SCIENCE SPORTS TECHNOLOGY
12:08 Guide To Online Sports Betting: How To Choose A Sportsbook
08:28 What Are Some Reasons to Consult a Brain Injury Lawyer?
09:24 Blockchain Solutions for Enterprises: How To Increase Efficiency And Profitability
07:06 How To Deal With A Car Crash In New York
17:43 Tips to keep in mind while choosing the casino site
11:34 Relation Between Employee Theft and Pre-employment Screening Check
04:37 Search your own desired site to play sports for betting
18:00 Top 3 Career Path Options for Business Analysts Preview
15:35 The history of Imen Jane, who is the influencer and the charges on the...
18:48 Sebastian Vettel's Greatest Races
BIST
1124
GOLD
458.727
USD
7.6460
GPB
9.7703
EUR
8.8844
Breaking News
Top 3 Career Path Options for Business Analysts Preview
Close

Employee theft is a massive epidemic costing Australian businesses over $1.5 billion annually. According to the Australian Federal Police, current and former employees are responsible for about 70 percent of business fraud. A recent stats by the Australian Retailers Association showed that employee theft accounted for over 55 percent of stock shrinkage.

This trend is surprising considering in 2018, the Australian Federal Government processed about 5.5 million police checks. Compare that to just 1 million in 2004. Over 90 percent of employers perform one form of screening check.

But how exactly do pre-employment screening checks relate to employee theft? This post aims to explore the intricacies of this issue.

About 84% of employers do a national police check australia on a new hire. A criminal history check shows the offenses of an applicant at the local, state, and federal levels including, felony convictions, current pending charges, acquitted charges, misdemeanor convictions, and dismissed charges.

If an applicant has a history of repeated theft, there’s a strong chance that they might engage in fraud in the future. This conclusion isn’t far-fetched considering the recidivism rate in Australia is 44.6%, meaning that 44.6% of prisoners return to jail within two years of release. This shows that even after people have been caught and punished for their actions, there’s still a good chance of them repeating such actions.

For employers, repeated theft is a major red flag during the hiring process.

For jobs in the financial sector, credit history checks are usually a standard part of background checks. A credit report reveals the spending habit of an applicant as well as bankruptcies, mortgages, auto loans, credit cards, and more.

For an applicant in a financially-stressed situation, the temptation for theft is significantly higher. For instance, a person on the brink of bankruptcy will easily engage in fraud just to make ends meet. Moreover, an applicant with a bad spending habit may not be suitable to be in a finance-related position.

By performing credit history checks on prospective employees, hiring managers can assess the likelihood of them engaging in future fraud and use that information to make wise employment decisions.

A Note of Caution

Although pre-screening checks - criminal history checks and credit history checks in particular - can give invaluable insight into an applicant’s likelihood to engage in future theft, it possesses a series of limitations. Some of which include:

The reality is that less than 10 percent of police checks typically turn up a criminal record. This means that many applicants with the tendency to steal might not have a criminal record, making it difficult to flag them out.

Some past offenders do turn a new leaf. But where past convictions are instantly discriminated against, it becomes easy to lose great candidates just because of their criminal past.

Pre-screening checks are invaluable tools for employers, although they are not foolproof as potential fraudsters may slip through the tracks. That’s why having a clear zero-tolerance policy for theft must be implemented in the workplace. 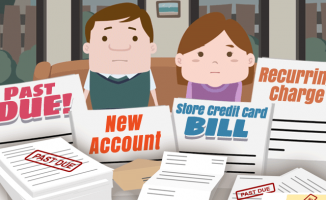