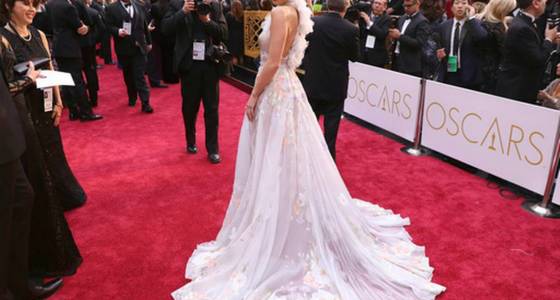 There was plenty of ornate gold, including a fringed dress on Emma Stone that appeared part goddess, part flapper. It fit her perfectly. Charlize Theron, always a red carpet favorite, received the metallic dress memo, hers in a green shimmer paired with huge 25-carat, pear-shaped diamond earrings from Chopard.

Negga accessorized with something extra on her first Oscar red carpet as a nominee — a blue ribbon in support of the ACLU. She gave kudos to the civil rights group for helping the real "Loving" couple as they fought their way to legal marriage as a mixed-race couple. And she shouted out her home country, Ireland, poised in her red tiara and statement earrings.

On the couples front, Chrissy Teigen joked with hubby John Legend on the carpet dressed in white Zuhair Murad Couture with gold embroidery and a dramatic cape. Legend wore Gucci. Another favorite carpet couple, Jessica Biel and Justin Timberlake, chatted amiably — he in a Tom Ford tux and she in a slinky KaufmanFranco textured gown with a statement gold-and-silver collar adornment that lent the appearance of metallic fringe.