MOSCOW (AP), -- Russia warned Wednesday that it will quickly take "retaliatory actions" if the U.S. or its allies refuse its security demands regarding NATO and Ukraine. This raised concerns about Russia's plans to invade its neighbor. 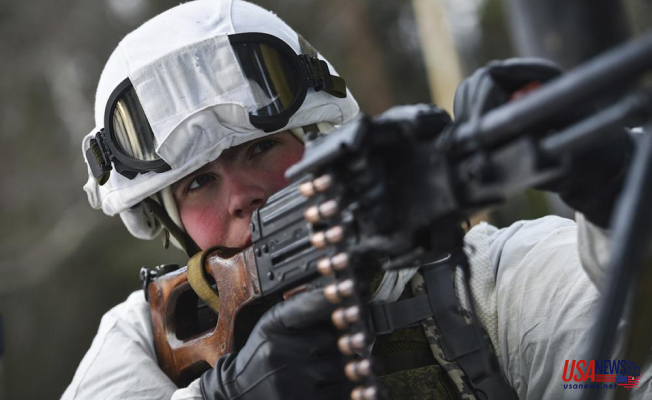 Although the Kremlin repeatedly denies any such plans, the U.S. along with its NATO allies are concerned about Russia's deployment of 100,000 troops near Ukraine and other military maneuvers.

The future of Ukraine is at stake: Russia demanded that NATO give guarantees that it will not admit Ukraine and other ex-Soviet countries as members, and that NATO would reduce troop deployments to other former Soviet bloc countries. Many fear that a war will only be possible if some of these non-starters, such as the membership pledge, remain unanswered by NATO.

Sergey Lavrov, the Russian Foreign Minister, stated that he and other high-ranking officials would advise President Vladimir Putin about the next steps following the receipt of written responses from the United States. These answers will be available this week, even though the U.S. government and its allies have made it clear that they will not accept Russia's most demanding demands.

Lavrov stated that Moscow would take all necessary measures if the West continued its aggressive path.

He said Russia would not wait for too long. He said, "We won’t allow our propositions to be drowned by endless discussions."

He laughed at the fears of an invasion and said that "our Western counterparts have driven themselves into a militarist frenzy," adding sardonically, "The Ukrainian elite has grown a bit scared about the Western scare."

When asked by lawmakers whether Russia could increase military cooperation with Nicaragua, Venezuela, and Cuba as part of its retaliatory actions, Lavrov replied that Moscow has strong ties with these countries in the Western Hemisphere, and is looking to strengthen them. He said that Putin had spoken by phone to the leaders of three countries last week, and they discussed ways to "deepen our strategic cooperation."

Lavrov's deputy refused to rule out Russian military assets being deployed to Cuba and Venezuela earlier this month if Moscow doesn't meet its security requirements.

Andrei Guskov, Russia's Ambassador to Cuba, said that the defense ministries of both countries were planning to increase their military cooperation.

NATO announced this week that it was strengthening its deterrence over the Baltic Sea Region and the U.S. placed 8,500 troops on increased alert for possible deployment to Europe. To help Ukraine improve its defenses, the West has also sent planeloads full of weapons.

In the midst of increasing tensions, Ukrainian officials sought to calm nerves.

Dmytro Kuleba, Ukraine's Foreign Minister, stated that although Russia has a presence near Ukraine it poses a threat, their number is not sufficient to launch a large-scale offensive.

Kuleba stated to reporters that they still lack key military elements and systems in order to mount a large, full-scale offensive.

He noted, as others have done, that alarming people could lead to a destabilizing effect. Russia, he stated, wants to destabilize Ukraine through "spreading panic", raising pressure on Ukraine’s financial system, and launching cyberattacks."

He stated that Putin would be pleased to see the plan succeed so that he doesn’t have to resort to military force to place Ukraine in a weak position.

This photo was taken by Vayar Military Agency on Tuesday Jan. 25, 2022. It shows Belarusian military vehicles preparing for joint military drills between Russia and Belarus. Russia sent unspecified numbers of troops from Russia's far east to Belarus, its ally, which shares a border in Ukraine, for major wargames next month. (Vayar Military Agency Agency via AP).

These comments are the latest from Ukrainian officials trying to reassure their citizens. In a speech to the nation Tuesday night, President Volodymyr Zilenskyy stated that Ukraine is "strong enough" to manage everything and stop any attempts to destabilize it.

The tensions are being heightened by the U.S., Canada, Australia, Germany, Australia and Canada moving to withdraw some of their dependents and diplomats from Kyiv. This was a move that the Ukrainian President Volodymyr Zilenskyy attempted to downplay Tuesday as part of a complex diplomatic game.

The U.S. Embassy in Kyiv asked all U.S. citizens who are visiting Ukraine Wednesday to leave immediately. They noted that security conditions "continue to be unpredictable due the increased threat from Russian military action, and can worsen with little notice."

Russian, French, Germany, Ukraine and France were all present in Paris to discuss how to revive the stalled peace accord for eastern Ukraine.

After the deposed of the president of Kyiv that was friendly to the Kremlin, Moscow annexed Ukraine’s Crimean Peninsula in 2014 and supported a separatist movement in the country’s eastern industrial heartland. Over 14,000 people have been killed in fighting between Ukrainian forces, Russia-backed rebels, and negotiations for a settlement are still at a standstill.

Dmitry Peskov, spokesperson for the Kremlin, stated that Moscow is expecting a "good and honest" discussion at the Paris meeting.

Russia accuses Ukraine that it plans to retake rebel-held areas. Kyiv refutes this claim. Lavrov claimed that the West encourages Ukraine to launch an offensive. He also dismissed talk of a Russian invasion imminent as "hysterics."

Andrei Turchak (head of the Kremlin’s main political party, United Russia), suggested that Moscow send munitions to rebels as a response to Western weapons being delivered to Ukraine. Russia has been accused of providing weapons and troops to separatists since the beginning of the conflict. This has not been denied.

The U.S. and its allies have also threatened severe sanctions against Moscow if it sends troops to Ukraine. However, they have not provided any details.

U.S. President Joe Biden stated Tuesday that Putin was "continuing to build forces along Ukraine’s border" and that an invasion "would be the biggest invasion since World War II." It would alter the world." Biden warned that an invasion would have serious economic consequences and personal sanctions for Putin.

Peskov, when asked to comment on Biden’s statement, pointed out that Putin's and other top officials do not have assets in the West. However, he reiterated that U.S. sanctions would "politically destroy" bilateral ties.

Britain promised sanctions and Foreign Secretary Liz Truss urged European countries to help Ukraine. Although the U.K. sent anti-tank weapons and other equipment to Ukraine, it did not send combat troops.

She told BBC that she would be legislating to tighten our sanctions regime and ensure we are fully able hit both individuals, companies, and banks in Russia in case of an incursion. "It is important that all our allies do this.

At a meeting in Berlin with Annalena Baerbock, the German Foreign Minister, she stressed that the goal of the European Union is "the defense of Ukraine's sovereignty & territorial integrity."

"Any Russian aggression against Ukraine will have severe consequences." Baerbock stated that Russia could be a threat to Ukraine politically, strategically, as well as economically and financially.