Russia, backed by China, vetoed a U.N. Security Council resolution on Tuesday to punish the Syrian government for using chemical weapons —  marking the first major public clash between Moscow and the Trump administration.The United States and its European... 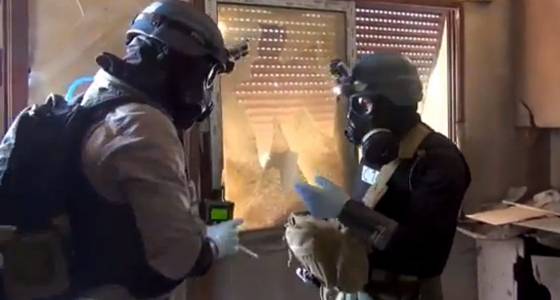 Russia, backed by China, vetoed a U.N. Security Council resolution on Tuesday to punish the Syrian government for using chemical weapons —  marking the first major public clash between Moscow and the Trump administration.

The United States and its European allies had supported the resolution, which would have imposed penalties on several Syrian military officials and entities for use of chlorine-filled barrel bombs in rebel-held areas densely populated with civilians.

Trump has said repeatedly that he sees Russia as a potential ally in the fight against Islamic State and in efforts to end the bloody Syrian war, which has dragged on for nearly six years. But the U.N. vote illustrated at least one fundamental policy difference over Syria.

Moscow had clearly telegraphed its intention to block the Security Council measure, saying it would be damaging to U.N.-led peace talks that convened last week in Geneva. After the veto, the Russian envoy accused Western allies of committing a “provocation” by pushing the vote forward.

Nine council members voted in favor of the resolution, which was drafted by Britain and France, with three voting against and three abstaining. That would have been enough yes votes for the resolution to pass if it had not been blocked by Russia and China, which —  along with the United States, France and Britain — are permanent members of the Security Council, with veto power.

The Trump-appointed U.S. ambassador to the world body, Nikki Haley, called the blocking of the resolution “outrageous and indefensible,” saying Syrian President Bashar Assad must be held to account for targeting his own people with banned weapons. The armaments can cause extremely painful injuries and deaths, and children are particularly vulnerable.

“People died in one of the most brutal ways possible,” Haley told the council. “The suffering is inhumane. It’s grotesque. It should shake every one of us to our core.”

Before the vote, Britain’s ambassador to the U.N., Matthew Rycroft, graphically described the death of a 6-year-old Syrian boy in a chemical weapons attack.

“His pupils were dilated. His lungs were crackling,” he recounted, citing eyewitness testimony. “All attempts to revive him failed.”

The resolution, the British envoy said, would represent “justice … for the hundreds, if not thousands, of Syrians whose stories are similar.”

The resolution cited U.N. findings that the Assad regime had used chemical weapons at least three times in 2014 and 2015. Haley said that in addition to those confirmed instances, there were credible reports of the weapons having been used “many, many” more times.

She and other Western allies also said that blocking the resolution would embolden the militants of Islamic State to use chemical weapons as well, as the group has done in at least one instance.

Russia, however, impugned Western motives in pushing for sanctions. “Geopolitical ends are an obstacle to reasonable thinking” on the issue, said Vladimir Safronkov, the deputy Russian U.N. ambassador.

Hours before the vote, Russian President Vladimir Putin, who was visiting Kyrgyzstan, told a news conference in the capital, Bishkek, that the resolution was “totally inappropriate.” Tuesday’s vote marked the seventh time that Russia has vetoed a Security Council measure targeting Assad.

Russia, together with Iran, is Assad’s main patron. Moscow’s military support last year gave Assad his biggest victory to date against rebels trying to topple him: driving opposition fighters out of the northern Syrian city of Aleppo, an industrial powerhouse before the war. The battle caused immense civilian suffering and laid waste to one of the Middle East’s loveliest and most historic cities.

Earlier in the war, the U.S. and Russia had teamed up to force Assad to sign an accord under which he agreed to dismantle the government’s stockpile of chemical weapons. That came after an attack on a Damascus suburb in August 2013 using poisonous sarin gas —  seemingly crossing what then-President Obama had called a red line that could trigger U.S. intervention.

A U.N. investigative panel cited repeated violations of the chemical weapons accord, and also found that Islamic State fighters had used mustard gas, another banned substance.

Russia called the findings inconclusive, although major monitoring groups like Human Rights Watch had also documented systematic use of chemical weapons by the Assad regime.