The group that represents journalists who cover the White House on Friday protested the exclusion of some news outlets from an on-the-record briefing that replaced the normal on-camera briefing open to all members of the news media. “The WHCA board is protesting... 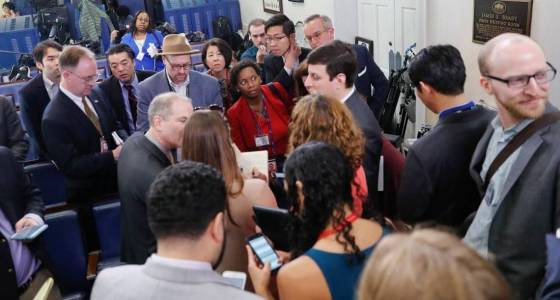 The group that represents journalists who cover the White House on Friday protested the exclusion of some news outlets from an on-the-record briefing that replaced the normal on-camera briefing open to all members of the news media.

“The WHCA board is protesting strongly against how today’s gaggle is being handled by the White House,” wrote Jeff Mason, president of the White House Correspondents’ Association in a statement. “The board will be discussing this further with White House staff.”

The exclusion set off an explosion of outrage, coming just hours after President Donald Trump used a speech to continue his denunciation of the news media, including calling journalists “the enemy of the people.”

“Many of these groups are part the large media corporations that have their own agenda and it’s not your agenda and it’s not the country’s agenda, it’s their own agenda,” Trump said at the Conservative Political Action Conference Friday. “They have a professional obligation as members of the press to report honestly. But as you saw throughout the entire campaign, and even now, the fake news doesn’t tell the truth. Doesn’t tell the truth.”

His criticism has been particularly harsh on some of the outlets excluded from the briefing. He referred to CNN Friday as the “Clinton News Network” and he has repeatedly referred to the New York Times as “failing,” while some of the outlets included in the briefing are considered friendly to Trump, including Breitbart News, the website once led by Trump adviser Stephen Bannon.

“It’s a sign of dangerous things to come,” said Lucy Dalglish, former executive director of the Reporters Committee for Freedom of the Press who’s now dean of the journalism school at the University of Maryland. “Presidents have always shown favoritism to one media outlet or another by granting interviews to some and not others. But this is different.”

Spicer said he understands the concerns some media outlets have about not being invited, but said that not everyone can attend everything.

“We’ve actually gone above and beyond with making ourselves, our team, and our briefing room more accessible than probably any either administration,” he said. “I think you can take that to the bank.”

McClatchy was unaware that other outlets had not been invited when it attended the briefing.

“McClatchy opposes any effort by the White House to ban news organizations from coverage,” said Kristin Roberts, the executive editor of McClatchy’s Washington bureau in a statement. “Had we known that news organizations were banned from today’s gaggle, we would not have participated. We will not participate again if that practice continues.”

I think we have shown an abundance of accessibility. We’ve brought more reporters into this process. And the idea that every time that every single person can’t get their question answered or fit into a room White House Press Secretary Sean Spicer

“Nothing like this has ever happened at the White House in our long history of covering multiple administrations of different parties,” Dean Baquet, the executive editor of The New York Times, said in a statement. “We strongly protest the exclusion of The New York Times and the other news organizations. Free media access to a transparent government is obviously of crucial national interest.”

White House officials during the administrations of Barack Obama and George W. Bush regularly gave background briefings for small groups of invited reporters, generally from larger media outlets, but those briefings did not replace the daily press briefing. The WHCA generally did not lodge complaints in those cases.

During the presidential campaign, Trump spent considerable time on the campaign trail ranting at what he called a “totally dishonest press” that he blamed for negative coverage and failure to show the true size of his crowds. He banned various newspapers from his rallies.

This is an undemocratic path that the administration is traveling. There is nothing to be gained from the White House restricting the public’s access to information. We are currently evaluating what our response will be if this sort of thing happens again Washington Post Executive Editor Marty Barron

Since he was sworn into office, Trump has selected reporters from conservative or friendly media outlets to ask him questions at his news conferences, a pattern that appears aimed at least in part at avoiding touchy subjects.

“There are plenty who want to get in for every event,” Spicer said. “We do what we can to be accessible, and if there is a problem with that, I understand it, we do what we can to accommodate the press. We go above and beyond when it comes to accessibility and openness and getting folks to our officials and our team.”

Spicer was not scheduled to have his usual on-camera press briefing Friday. The White House announced late Thursday that Spicer would hold a more informal gaggle without cameras in the briefing room instead. Then on Friday morning, the White House press staff changed that plan, saying that the gaggle coverage would be limited to two dozen reporters who are part of what is called an expanded pool for coverage. Then Spicer invited several outlets that do not fit into that group.

“We want to make sure we answer you questions, but we don’t need to do everything on camera every day,” he said.

The White House Correspondents Association encouraged organizations that were allowed into Friday’s briefing to share the material with others in the press corps who were not. The White House later posted a transcript of the briefing on the White House website.