From a cozy chicken coop in west Petaluma, Ane Carla Rovetta bridges the divide between art and science.Here, in a studio filled with vials, jars and containers neatly stacked and organized in cubbies, she makes magic like a chemist from ancient times, mixing... 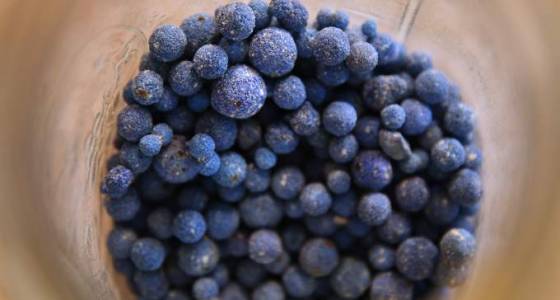 From a cozy chicken coop in west Petaluma, Ane Carla Rovetta bridges the divide between art and science.

Here, in a studio filled with vials, jars and containers neatly stacked and organized in cubbies, she makes magic like a chemist from ancient times, mixing up paints from pigments collected from nature and turning them into works of fine and decorative art — everything from paintings to frescoes.

Her paints are made in the same way Renaissance masters created theirs, from soil, stone and other substances. Rovetta also makes inks from the same oak galls used by Leonardo da Vinci and wet lime plaster like Michelangelo.

Keeping the old ways alive, she researches the old recipes and like a good chef, devises her own. Carbon soot, iron, green tea, redwood cones, oak galls, walnuts, pomegranates, sumac, bay and brazil wood become the ingredients for ink. For paints, she collects soils and stone from all over the U.S., and grinds them into pastel chalks or paints. She mixes in milk, buttermilk, egg yolk, egg whites, soap, soap-root plant, tree saps or soy as binders to hold her paint to the page. Rovetta even makes her own paper.

With these earthen pigments, the 64-year-old artist, who gives new meaning to the term “old school,” captures the California landscape and wildlife in deep and rich hues, fiery sunsets, milky clouds.

Nothing delights her more than to engage in experiments to create new pigments by hand for her ever-expanding wheel of colors, all without artificial chemicals.

She says people frequently ask why she would go to all that bother, especially when the advances in acrylic paints within the last century freed artists from the labor of mixing their own.

But Rovetta finds something deeply satisfying about starting a piece of artwork before her color hits a canvas.

“To me, that is a part of the artistic process, especially when I’m making papyrus and out collecting plants. Then my painting is starting out in the marsh because I’m collecting tule for the papyrus.”

She teaches the process of creating natural pigments through classes and workshops for children and adults at places like the Laguna de Santa Rosa Foundation and Point Reyes Field Seminars.

“Children love the grinding. Especially the hyperactive boys,” said the artist, who annually accompanies seventh graders to Joshua Tree National Park, where they go out into the desert and make paint on site, including their own brushes out of Joshua Tree needles that they use — and respectfully leave behind.

Rovetta grew up with a deep appreciation for nature’s artistic gifts through her grandfather, Carlo Antonio Rovetta, a master marble cutter who did a lot of work for the 19th century industrialist Leland Stanford.

He discovered a marble quarry outside the town of Jackson that produced a beautiful pink marble prized by Stanford and incorporated into several buildings at Stanford University.

Unfortunately, an earthquake drove the marble deep into the ground and out of reach.

Rovetta said her father, perhaps remembering the financial calamity of his father’s mine, told his daughter not to become an artist. Despite her love for art, she instead became a biologist.