‘I am an immigrant’: A chef being sued by Trump rips off his coat on stage

José Andrés tore off his white chef’s coat on stage to reveal a black T-shirt with the simple words he would go on to stress during a tribute dinner in his honor: “I am an immigrant.”The 400 or so black-tie guests at the annual South Beach Wine &... 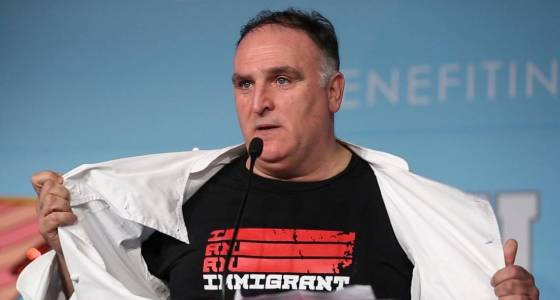 José Andrés tore off his white chef’s coat on stage to reveal a black T-shirt with the simple words he would go on to stress during a tribute dinner in his honor: “I am an immigrant.”

The 400 or so black-tie guests at the annual South Beach Wine & Food Festival auction dinner to raise money for Florida International’s hospitality school stood and applauded so long Andrés had to pause his speech at the end of a night of luxurious dining.

“The American dream of the 21st century is to be an America of inclusion not of exclusion,” Andrés, a Spanish immigrant who became a U.S. citizen three years ago, told the crowd as he advocated for immigrant protections. “I am an immigrant and a proud American immigrant. Together, we can keep moving this amazing country forward.”

This was a night when top chefs — Andrew Zimmern, Michael Voltaggio, assistants for Emeril Lagasse — honored one of their own by collaborating to prepare a decadent meal at $500 a ticket at the Loews Miami Beach Hotel, with Emilio and Gloria Estefan in attendance. It was emceed by chef, author and “No Reservations” television host Anthony Bourdain.

But Andrés didn’t use the stage to plug his new Brickell restaurant, Bazaar Mar, or to talk about his various charitable efforts, such as providing meals for Washington D.C.’s impoverished children during the summers.

Instead, he used his platform — both on this night and in his role as executive chef for 27 restaurants around the world — to double-down on his message in support of immigrant rights. It’s a stance that has put him at odds with what he feels is an anti-immigrant message coming from Donald Trump, the candidate and president, and Trump the business man.

So Andrés pulled out of out of an agreement in 2015 to open a restaurant in Washington D.C.’s Trump Hotel in response to Trump’s talk of building a wall and using terms rapist and murders to describe Mexican immigrants. Trump returned fire with a $10 million lawsuit.

Andrés, whom President Barack Obama presented with the National Humanities Medal in 2015, closed five of his Washington D.C. restaurants during the “Day Without Immigrants” protest in solidarity with the movement. His stance emboldened others in the food community, such as Bourdain.

“He is the first chef in the history of the world to be sued by a sitting president. He is my hero,” Bourdain told the crowd at the beginning of the night, setting the stage for an evening of cuisine with a side of unabashed personal politics.

READ MORE: Miami’s homeless will be fed by foodies this weekend thanks to food festival

Bourdain, too, has been critical of Trump’s stance on immigration, particularly since, he said, immigrants of varying legal status “do the work” in restaurant kitchens around the county. The fact Andrés backs up his words with his myriad restaurants, Bourdain said, adds another layer to the power of his voice.

“I have nothing to lose to take that stand. I don’t run a restaurant empire. The president ain’t going to sue me for $10 million,” Bourdain said. “José risked everything to take a principled stand. And I don’t think he can be admired enough for that.”