How Mexico's president saw his approval rating plummet to 17%

In December 2012, when Enrique Peña Nieto took office as Mexico’s president, his approval rating was 54%. It was a modest but respectable showing, considering he’d been elected from a four-candidate field with about 38% of the vote.The central... 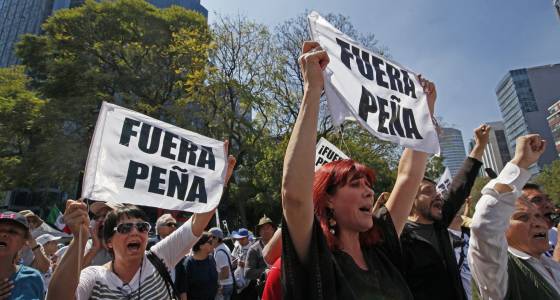 In December 2012, when Enrique Peña Nieto took office as Mexico’s president, his approval rating was 54%. It was a modest but respectable showing, considering he’d been elected from a four-candidate field with about 38% of the vote.

The central concerns in the country at that time were violence — measured in homicides, extortions and abductions often linked to drug cartels — and the economy. Peña Nieto, who was the reform candidate of the notoriously corrupt Institutional Revolutionary Party, or PRI, promised to address these concerns and promised that his government would be transparent and accountable to the people.

Now, with Peña Nieto two-thirds of the way into his six-year term, many Mexicans believe he has failed on all fronts and been incapable of meeting the new challenge from President Trump.

His approval ratings in polls have plummeted, even falling below 20%. Though many factors drive polls, here’s a look at some of the significant events that turned public opinion against Peña Nieto:

(All numbers come from Consulta Mitofsky polls conducted for El Economista newspaper. The polls are conducted every three months.)

Peña Nieto’s approval rating declined slightly during his first year in office, going from 54% to 50%, but it wasn’t until the end of year two that his numbers began to drop precipitously.

The most profound effect, one that would continue to this day, began with the tragedy on Sept. 26, 2014, when a group of students from the Escuela Normal Rural Raul Isidro Burgos de Ayotzinapa, a teachers college, commandeered several commercial buses to use as transportation for an upcoming protest.

Police ambushed the students, and by the end of the night six people had been killed, 25 had been injured, and 43 students had disappeared.

The Mexican people were left with a series of haunting questions: Were the students handed over to drug traffickers by police? Did federal officials purposefully mishandle evidence and bungle the investigation that followed? And, of course, where are the 43 students?

The government blamed local police and drug cartels for the disappearance, and alleged that the students had been burned to ash in a massive pyre at the Cocula garbage dump in the state of Guerrero. But international experts have since concluded that this explanation, which was called the “historical truth" by Mexico’s attorney general, was scientifically impossible.

In August 2014, a month before Ayotzinapa, as the incident is known, Peña Nieto had an approval rating of 47%. By November, it dropped to 41%.

But these numbers don't capture the full effect of Ayotzinapa on Peña Nieto's popularity. Each revelation, and each apparent attempt to hide what happened, further eroded the public trust in the presidency.

It seems that any protest in the capital, no matter the subject, still includes signs that reference the events of Sep. 26. On Mexico City's most famous boulevard, Paseo de la Reforma, a simple monument of a plus sign and the number 43 reminds pedestrians and motorists of the unanswered questions, and the thousands of other disappeared people throughout Mexico.

Around the time the events of Ayotzinapa unfolded, accusations of corruption or at least conflict of interest began to swirl around Peña Nieto.

Reporter Carmen Aristegui broke the story on her website that Angelica Rivera, the first lady of Mexico and a longtime soap opera star, had purchased a $7-million home on credit through Grupo Higa, owned by Juan Armando Hinojosa Cantu, a frequent contractor for the government.

Cantu was connected to two other deals around the same time that further aroused concerns of conflict of interest. He was awarded a lucrative contract to build a high-speed train between Mexico City and the city of Queretaro — which was quickly canceled after the purchase of the house was reported. He also sold a home on credit to Luis Videgaray, another member of Peña Nieto’s government.

“While the country was mourning the 43 students, you have this evidence of flagrant abuse of power by the president and his immediate circle,” political analyst Alejandro Hope said.

Any bump in approval Peña Nieto might have enjoyed when police captured drug kingpin Joaquin “El Chapo” Guzman in February 2014 was surely lost in July 2015 when the cartel boss made a stunning escape through a massive tunnel that had been under construction for months.

The event was an embarrassment for Peña Nieto for a multitude of reasons. After all, El Chapo had escaped a Mexican prison once before. Still, Mexico had refused an offer from the United States to prosecute Guzman to avoid such a repeat scenario.

“Peña said it wasn’t necessary to send him because our system works,” political analyst Jose Antonio Crespo recalled. “When he escaped, the whole world saw that we already know: that the level of corruption is extremely high.”

Two months before Guzman’s escape, Peña Nieto had a dismal 39% approval rating. By August, just weeks after escape, it fell even further, to 36%.

El Chapo was eventually recaptured and has been extradited to the United States.

During the U.S. presidential campaign, candidate Donald Trump surprised Peña Nieto by taking him up on an offer to visit Mexico at the end of August. Many Mexicans wondered why their president had extended such an invitation at all after the abuse that the candidate had directed at Mexico.

Political analyst Hope said there was no upside to Peña Nieto’s meeting with Trump.

“You’re giving him recognition and treatment of a higher state and you’re getting nothing in return, just a vague promise of access in the future,” Hope said. “I think they were blindsided by how much anger that produced.”

In the month of the meeting, Peña Nieto was polling at 29%. By November, just 24% approved of his performance in office.

In the next few months, several events combined to drive Peña Nieto's poll numbers down even further.

The peso had been dropping for some time, but once Trump was elected in November, it sank to a historical low of nearly 22 to the dollar, stirring many unnerving memories of the 1994 peso devaluation. A wave of concern gripped the country as people wondered what effect the Trump presidency would have on their economic future and their relatives living in the U.S.

Many Mexicans questioned whether Peña Nieto could stand up to the man who had blamed Mexico for so many of the ills in the U.S.

“We can’t allow these insults and humiliations to pass. If you send a weak signal, you're going to negotiate disadvantageous positions,” Crespo said. “The government is very lukewarm when confronting Trump.”

Peña Nieto's popularity wasn't helped any during this precarious political period by the implementation of the gasolinazo, a move to peg the price of gas to the free market instead of artificially stabilizing it. In December, the national gas company, Pemex, raised the price of gas by about 20% for premium overnight, and Mexicans rang in 2017 with protests and panic.

Analyst Hope said that by January — when one newspaper poll gave Peña Nieto a 12% approval rating — it was virtually impossible for Peña Nieto to win the hearts and minds of the public. So many negative episodes had occurred, and there was little good to distract: The economy was grinding to a slow crawl, crime was back up, and the country remained disappointed by Peña Nieto's attempts at diplomacy with Trump.

“By now there’s so many things, there’s pretty much nothing that will be well received by the Mexican people. He could rescue a young child somewhere and people would think there’s an angle," Hope said.

By February, Peña Nieto’s approval rating had hit 17%. He still has two years left in his term.

Tillman is a special correspondent.

Cecilia Sanchez of The Times’ Mexico City bureau contributed to this report.