His mom was dead and the boy lay wounded in a hospital bed. But he wouldn't be alone.

When Southern Middle School teachers and staff heard that one of their seventh-grade students was in a hospital with a gunshot wound from an attack that killed his mother — his only relative in Lexington — they knew what to do.Teachers rushed to the hospital... 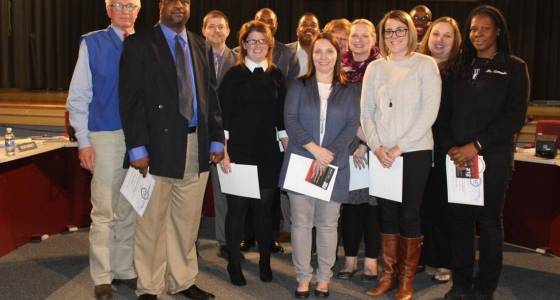 When Southern Middle School teachers and staff heard that one of their seventh-grade students was in a hospital with a gunshot wound from an attack that killed his mother — his only relative in Lexington — they knew what to do.

Teachers rushed to the hospital that night.

“Two teachers stayed with him through the night so he would not be alone. One went home at 3 a.m. One stayed until the crack of dawn,” Fayette County Schools spokeswoman Lisa Deffendall said. She described the selfless actions of the Southern Middle school staff members Monday night as they were honored at the Fayette County Public Schools board meeting.

“The staff at Southern Middle became his family when he had no one else,” Deffendall said. “Throughout the weekend, Southern Middle School employees came in shifts, visiting the student, playing games with him, fulfilling his requests for Mountain Dew and Sour Patch Kids (candy), and ensuring he was not alone.”

Teachers and staff at the school kept vigil around the clock throughout that weekend, she said, “and have continued to wrap him in love since.”

They connected with community agencies to help the student and worked with his church. They took up a collection, along with Tates Creek Middle School and Julius Marks Elementary School, and raised more than $700 for him.

The student wasn’t identified, and other details of the shooting weren’t discussed at the school board meeting, but the Herald-Leader has reported that Tiffany Duiguid, 32, was killed Feb. 3 by a man she was dating in an apparent murder-suicide at the Whispering Hills Drive townhouse she shared with her 13-year-old son.

Keith Plaster, 44, and Duiguid had apparently been arguing when the boy went upstairs to see what was happening. That’s when the boy was shot, police said. Plaster was found dead on the back porch from a self-inflicted gunshot wound to the head, the coroner said.

The boy was able to run to a neighbor’s house on King Arthur Drive and ask for help. He was taken to University of Kentucky Chandler Hospital and treated for gunshot wounds that police said were not life-threatening, the Herald-Leader reported.

When Deffendall honored the Southern Middle staff during the school board meeting, she quoted one of them:

“We just tried to help a student, who lost his life as he knew it, feel at home,” the staff member said, “That’s just how we do things at Southern Middle. There’s no other way for us. ... We are a family, and when there is a need, we are there.”

Southern Middle interim principal Jake Bell, who was at the board meeting, told the Herald-Leader that the student is back at school, “doing well,” and is living with a foster parent who is a Lexington police officer.

The officer, who doesn’t want to be identified, “has custody of the young man as a temporary guardian,” police spokeswoman Brenna Angel said Tuesday.