Hailed a hero, bar shooting victim says he did 'what was naturally right to do'

In the video posted to YouTube, Ian Grillot has his neck in a brace and his surgically repaired hand bandaged and protected.He has heard, he says in the footage, that some have called him a hero."No, it's not like that," Grillot says. "I was... 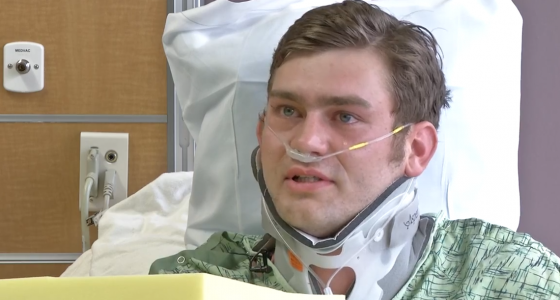 In the video posted to YouTube, Ian Grillot has his neck in a brace and his surgically repaired hand bandaged and protected.

He has heard, he says in the footage, that some have called him a hero.

"No, it's not like that," Grillot says. "I was just doing what anyone should have done for another human being. It's not about where he was from or his ethnicity. We're all humans. I just felt I did what was naturally right to do."

Grillot, 24, says he tried to intervene on Wednesday night when gunshots rang out at Austins Bar and Grill in Olathe, Kansas. In the aftermath, investigators were working to determine whether the fatal attack, which left one Indian man dead, was "bias motivated." Authorities have not called the incident a hate crime and have not released many details of the attack.

The Kansas City Star reports that the shooting occurred shortly after halftime of the KU basketball game, when the bar was crowded. According to the newspaper, Adam W. Purinton, a 51-year-old man charged in the shooting, reportedly opened fire after telling two people, who were both Indian men, to "get out of my country."

One of those two men, 32-year-old Srinivas Kuchibhotla, later died from the wounds he suffered in the encounter. The second man, Alok Madasani, also 32, survived, as did Grillot, another patron at the bar.

Witnesses told the Star and The Washington Post that Purinton was thought to have been kicked out of Austins before the Wednesday night shooting occurred. Garret Bohnen, a bar regular who was there the night of the shooting, told The Post that Purinton "seemed kind of distraught."

Purinton reportedly hurled racial slurs at the two Indian men before he began shooting, according to the Star. His comments indicated he believed Kuchibhotla and Madasani were of Middle Eastern descent. Grillot in the YouTube video describes the shooting, saying he tried to step in after a few rounds were fired and was hit.

"Ian, You are an amazingly brave person," read one comment on an online fundraiser page, which by Friday evening had raised more than $200,000 for Grillot. "You have personified the real America, we all know and love. I wish you a speedy recovery and thank you, your parents and family for the values you have."

"Thank you for not being a bystander," read a third, which also called Grillot a "hero" for what he did.

In an update posted to the Go Fund Me page on Friday, a woman who said she was Grillot's sister described her brother Ian as stubborn and hard-headed, passionate and determined. She wrote that he "knows anything and everything about fish and other small creatures," and loves to spend time with friends and family members.

"My brother is caring," she wrote. "He would give the shirt off his back or last $5 to a total stranger."

Yes, she wrote, he was "the biggest pain in my butt at times." But he would also always be one of the first to "come to my rescue" if she needed it.

"Ian is not a hero," she wrote. "Ian was simply doing what he knew he had to do. What we were raised to do. Stand up for those who need it. Do the right thing no matter how difficult it is."

In the video, which was posted on the University of Kansas Hospital's YouTube page, Grillot recounted the shooting, saying that he had initially ducked under a table when the gunshots began. He tried to keep count and thought he heard nine shots. He expected the shooter's magazine to be empty.

"I guess I miscounted, with everything going on," Grillot said.

Grillot said he was shot after he got up and tried to chase down the gunman. The round went through his hand, he said, and through his chest.

"Barely missed my carotid artery, I guess," he says.

According to Grillot, it fractured one of his vertebrae, too.

"That was about the gist of it," Grillot said in the video. "Then I remember being here at the hospital. So, I wasn't really thinking when I did that. It was just, that wasn't right. And I didn't want the gentleman to potentially go after somebody else. If he did it once, what would stop him from doing it again?"