Survivors decry new amnesty bill that would free perpetrators of crimes against humanity during 1960-1996 civil war. 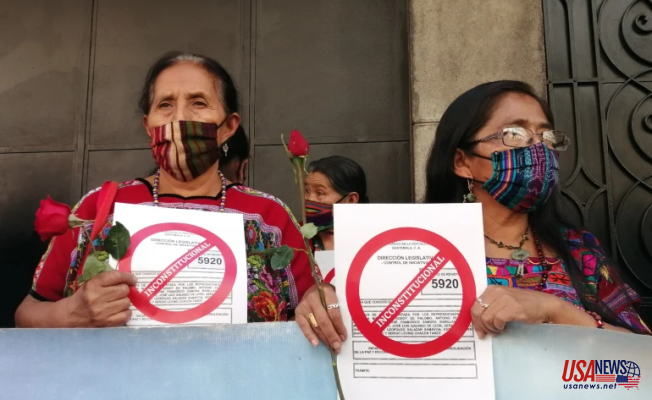 San Juan Comalapa, Guatemala – Julia Poyon was three years old when Guatemalan soldiers broke down the door to her family’s home and took her father away. Now decades later, Poyon says her only hazy memory of him is from a joyful night before his 1981 abduction.

“We went to church one night and I remember he carried me on his shoulders,” Poyon told Al Jazeera. “I remember he was wearing a hat. I can’t remember his face.”
Felipe Poyon Saquiquel was a Maya Kaqchikel farmer and catechist living in a village near San Juan Comalapa, 80 kilometres (50 miles) from Guatemala City.

When the military grabbed him out of bed on May 8, 1981, they told his wife that it was just for questioning. Poyon Saquiquel knew otherwise. “Take good care of our children,” he called out to his wife as he was hauled out the door, according to Poyon’s mother.

Never seen again, he became one of an estimated 45,000 people who disappeared during the civil war that raged between the Guatemalan military and leftist guerrilla forces between 1960 and 1996.

Wednesday marks 25 years since peace accords ended the 36-year armed conflict, but the struggle for truth, justice and reparations — led primarily by Indigenous people who make up the majority of the war’s victims — continues amid fresh challenges and backlash.

“We are still seeking justice,” Poyon said after a ceremony in June on the grounds of a former military base in San Juan Comalapa, which is now home to a memorial for victims of enforced disappearances. It is also where the remains of 220 people were discovered in clandestine graves during exhumations in 2003-2004.

The conflict
An estimated 200,000 people were killed during Guatemala’s armed conflict, including in more than 600 documented massacres around the country.

More than 80 percent of the victims were Indigenous Maya civilians, and the military was responsible for more than 90 percent of atrocities, according to a United Nations-backed truth commission, which also concluded that state actors committed acts of genocide.

As part of the peace process, Congress passed a National Reconciliation Law in mid-December 1996, extinguishing criminal responsibility for many political and common crimes committed on all sides in the context of the conflict. But the amnesty provisions in the law explicitly excluded genocide, torture, and enforced disappearance, as well as any other crimes with no statute of limitations under national or international law.

Finalised later that month on December 29, 1996, the peace accords included commitments not only to truth and justice but also to addressing the root causes of the conflict, including systemic racism and other longstanding inequalities.

But those issues are as present as ever in the Central American nation, said relatives of the disappeared and human rights leaders at a peace accords commemoration earlier this month.

“Fulfilment of the peace accords is fundamental for dealing with the structural problems that remain in the country,” Mika Kanervavuori, the representative in Guatemala for the Office of the UN High Commissioner for Human Rights, said during the December 15 event.

Prosecuting perpetrators
The past decade has seen progress in bringing perpetrators of conflict-era atrocities to justice, however, with high-ranking former military officials convicted of enforced disappearance, sexual violence, and other crimes against humanity. Others are on trial, including for genocide.

In 2013, former military dictator Efrain Rios Montt was convicted of genocide. The conviction was overturned and he died before a partial retrial concluded, but a tribunal ruled in 2018 that the military committed genocide during his rule.

Another landmark case advanced this year when 11 ex-military officers were arrested in May for crimes against humanity, murder, enforced disappearance, and other crimes documented in the “Diario Militar”, a death squad diary.

The military intelligence dossier, leaked in 1999, documented 183 cases of enforced disappearances between 1983 and 1985. Most of the victims were student organisers, union leaders, guerrilla group members or sympathisers, writers, and other dissidents. In many cases, the dossier details ended with “300” — the code for execution.

“Thinking differently in those years was considered criminal here in Guatemala,” said Maria Elisa Meza, whose father, mother and aunt were killed by the military in the 1980s.

Gustavo Adolfo Meza Soberanis, Meza’s father, is listed in the death squad diary. A 26-year-old doctor who assisted and treated guerrilla group members, he was abducted on September 7, 1983, when Meza was only a few months old. His remains have not been found.

“From what people told me about my dad, his sense of humanity was wide awake. He was someone who always fought for those less fortunate,” Meza, a member of the HIJOS movement of children of the disappeared, told Al Jazeera.

Amnesty bill
Meza and other relatives of victims celebrated when a judge ruled the accused would face trial, but a backlash had already begun.

A week and a half after the initial death squad diary arrests, nine legislators from the ultra-conservative Valor Party presented a bill that would free all ex-military personnel and paramilitary patrolmen convicted or accused of crimes during the armed conflict.

Zury Rios, the daughter of former dictator Rios Montt, is a leader in the party. She was Valor’s presidential pick in 2019, but was barred from running due to a constitutional prohibition on relatives of people who took power by force. A court permitted her to run in 2015, though, and she is expected to try again in 2023.

The party’s amnesty bill was presented on the floor of Congress on September 22 and sent to legislative committees for review. In practice, there is no set timeline for when, if ever, bills are brought to a vote.

“What they seek is impunity,” said Feliciana Macario, one of the coordinators of the Indigenous-led National Platform of Victims of the Internal Armed Conflict. “Now what they aim to do is legalise crimes against humanity through an amnesty.”
In their preamble to the proposed “Law of Consolidation of Peace and Reconciliation”, the lawmakers argued that there was no genocide in Guatemala and that enforced disappearance, torture, and other crimes against humanity should not have been excluded from amnesty provisions in the National Reconciliation Law.

“I think that when the peace accords were signed, and we had tools to seek justice, we felt relief in our hearts. But now, seeing these attitudes, we feel sadness because it is hard to see that path to achieve justice,” Macario told Al Jazeera.