Graton Resort and Casino may double size of its hotel

SAN FRANCISCO — The Graton Resort & Casino is exploring the possibility of doubling the number of rooms at its hotel outside Rohnert Park, an expansion that would make it the largest hotel in Sonoma County, the leader of the tribe that owns the resort said... 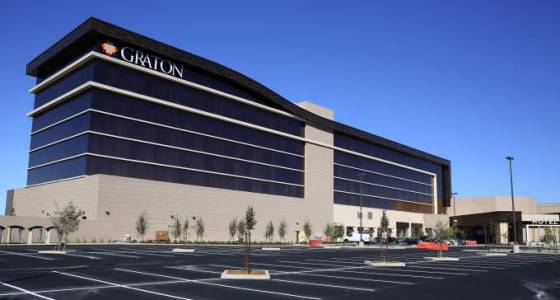 SAN FRANCISCO — The Graton Resort & Casino is exploring the possibility of doubling the number of rooms at its hotel outside Rohnert Park, an expansion that would make it the largest hotel in Sonoma County, the leader of the tribe that owns the resort said Tuesday.

During a wide-ranging discussion at a San Francisco event for LGBT business leaders, Greg Sarris, tribal chairman of the Federated Indians of Graton Rancheria, said the resort was completing an environmental review for an additional 200 hotel rooms.

The resort’s first 200 hotel rooms opened in November as part of a $175 million expansion to the $850 million casino that debuted in 2013.

“The hotel is virtually booked through April or May or something like that, and so we’re looking at 200 more rooms,” Sarris told an audience of more than 200 people gathered at the Marines’ Memorial Club on Sutter Street.

The potential hotel expansion is still in the early “study =stage,” said Joe Hasson, the resort’s general manager. Hasson, who attended the San Francisco event, characterized the review as a preliminary measure to investigate the environmental feasibility of adding more rooms in the event the tribe decides to build them someday.

“There is no definitive plan at this time,” Hasson said. He called the review “simply exploratory.”

Sarris’ comments came during his talk at the tail end of a “power lunch” event hosted by the Golden Gate Business Association, the country’s first lesbian, gay, bisexual and transgender chamber of commerce. Sarris was interviewed at the event by Steve Falk, CEO of Sonoma Media Investments, which owns The Press Democrat.

During the conversation, Falk asked Sarris about his vision for the resort for the next five years, prompting him to make the comments about the possible 200 more rooms. Sarris also reiterated his plan to hire undocumented workers to sell organic produce grown on tribal land.

Sarris also spoke of the history of his tribe, which was restored by Congress and President Bill Clinton in 2000, and his role at the resort, now one of Sonoma County’s largest employers. He elicited applause from the crowd when he said all of the resort’s about 2,000 employees who work at least 20 hours a week pay nothing from their paychecks for health insurance.

The insurance was part of an effort to create a respectful workplace for employees, Sarris suggested. Other steps included his goal of trying to learn all workers’ names.

Falk asked Sarris, who is openly gay, about how his background as an American Indian and member of the LGBT community shaped his world view.

“It’s been a challenge to stay whole and be all of who I am, wherever I am,” Sarris said.

American Indians face not only homophobia but also disproportionately high suicide rates compared to other groups, Sarris said. Accordingly, he expressed hope that his experience as an openly gay and successful tribal chief could serve as an example to others.

Other speakers at the event included Vivienne Ming, a theoretical neuroscientist, technologist and entrepreneur who emceed the event; and Roger Doughty, president of Horizons Foundation, which funds LGBT organizations.