From prison to the Oscars: The story of 'Gary from Chicago'

LOS ANGELES — "Gary from Chicago," the everyman catapulted to fame when he walked into the Oscars and onto the world's biggest stage, had just been released from prison days earlier.Gary Alan Coe was among a group of tourists who were led into the show... 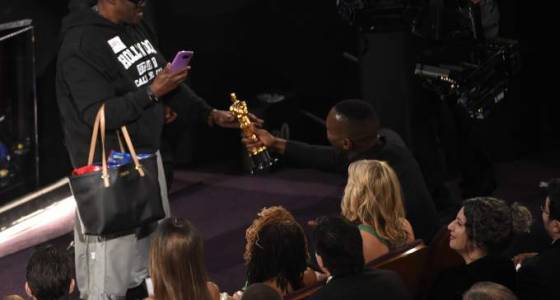 LOS ANGELES — "Gary from Chicago," the everyman catapulted to fame when he walked into the Oscars and onto the world's biggest stage, had just been released from prison days earlier.

Gary Alan Coe was among a group of tourists who were led into the show during a one of host Jimmy Kimmel's gags. Coe and his fiancee posed for selfies with Hollywood stars, had Denzel Washington perform a faux wedding for them and held Mahershala Ali's Oscar trophy.

Coe's public defender said in a Facebook post that he had served 20 years for petty theft when he was released, and had a 1975 conviction for attempted rape when he was a teenager.

The 59-year-old Coe said in an interview with ABC7 in Chicago that he is a changed man.

"I'm the luckiest man in the world," he told the TV station. "It's a sad day to be in prison for 20 years and not be able to be a dad, granddad to your children."

Coe's public defender Karen Nash said he was released Friday. She posted a photo on Monday of the pair, saying she had worked on his case for years.

"If you watched the Oscars, you know the rest," she said.

Coe's daughter said she did not see the show Sunday, but her phone buzzed with messages the day after.

Jacqui Williams, 36, a Chicago native who lives in Lafayette, Indiana, told The Tribune her father was born in Memphis, Tennessee, and moved to Chicago at age 12 in 1969. He moved to the West Coast in 1992. She declined to comment about his time in prison.