Galleries Videos CONTACT ADVERTISE
Famagusta 27°
clear sky
BUSINESS EDUCATION ENTERTAINMENT HEALTH POLITICS SCIENCE SPORTS TECHNOLOGY
12:08 Guide To Online Sports Betting: How To Choose A Sportsbook
08:28 What Are Some Reasons to Consult a Brain Injury Lawyer?
09:24 Blockchain Solutions for Enterprises: How To Increase Efficiency And Profitability
07:06 How To Deal With A Car Crash In New York
17:43 Tips to keep in mind while choosing the casino site
11:34 Relation Between Employee Theft and Pre-employment Screening Check
04:37 Search your own desired site to play sports for betting
18:00 Top 3 Career Path Options for Business Analysts Preview
15:35 The history of Imen Jane, who is the influencer and the charges on the...
18:48 Sebastian Vettel's Greatest Races
BIST
1124
GOLD
458.727
USD
7.6460
GPB
9.8321
EUR
8.8844
Breaking News
Top 3 Career Path Options for Business Analysts Preview
Close

For Navy SEAL lost in Yemen, presidential praise – and an ovation

The widow of Chief Petty Officer Ryan Owens, the Navy SEAL killed in Yemen, was seated next to President Donald Trump’s daughter, Ivanka, during Trump’s speech to Congress.Carryn Owens was joined by her parents, according to the White House. The family... 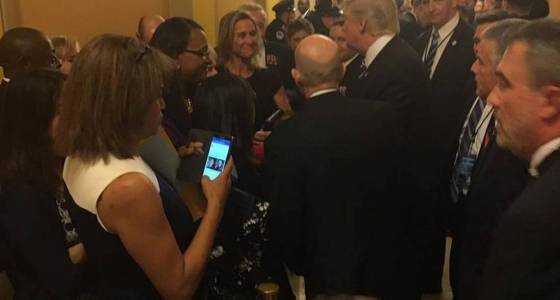 The widow of Chief Petty Officer Ryan Owens, the Navy SEAL killed in Yemen, was seated next to President Donald Trump’s daughter, Ivanka, during Trump’s speech to Congress.

Trump spoke of Owens near the end of his speech.

“Ryan died as he lived: a warrior, and a hero – battling against terrorism and securing our nation,” he said.

Carryn stood up and cried. “I love you baby,” she mouthed while looking up.

“Ryan’s legacy is etched into eternity,” Trump said to sustained applause. “For as the Bible teaches us, there is no greater act of love than to lay down one’s life for one’s friends. Ryan laid down his life for his friends, for his country, and for our freedom –- we will never forget him.”

The ovation lasted several minutes, prompting the president to make a rare departure from his prepared speech. “Ryan is looking down right now and I think he’s very happy because he just broke a record,” Trump said.