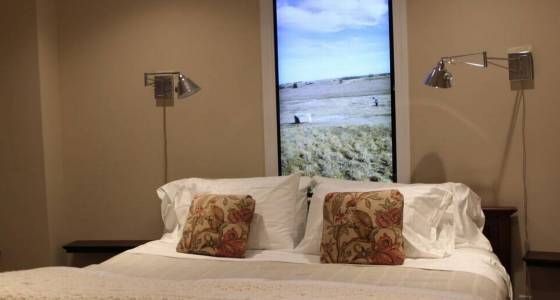 Tour of a doomsday bunker, inside luxury survival condos

The luxury survival condos and doomsday bunkers are built to protect against a catastrophic event while offering privacy and comfort for its residents. Logic Integration designed and installed a massive AV system for a missile silo doomsday bunker in Kans

The luxury survival condos and doomsday bunkers are built to protect against a catastrophic event while offering privacy and comfort for its residents. Logic Integration designed and installed a massive AV system for a missile silo doomsday bunker in Kans

The door to the Survival Condo closes slowly, sending a resounding thud through the concrete parking garage.

Those inside have surrounded themselves with walls up to 9 feet thick, ready to withstand a nuclear explosion, the eruption of Yellowstone’s supervolcano or an outbreak of avian flu.

Larry Hall, project manager and owner of the Luxury Survival Condo Project, says he feels safer with the doors closed.

He says he’s sold all 12 luxury condos in the former Atlas missile silo — which once housed a nuclear warhead — not far from Concordia, about two hours north of Wichita. He’s working on a second silo.

Survival is a unifying cause. Hall said his owners come from a variety of political beliefs and include people in international business, architecture, law and medicine. He said the owners don’t do interviews; efforts to reach them were unsuccessful.

It doesn’t matter what your threat scenario or ranking is, what matters is that this is a one-size-fits-all solution. ... Having a survival facility is certainly in vogue.

The survival habits of the rich have been chronicled by media organizations from New Yorker to NPR in the past few years.

A 2012 “doomsday preppers survey” by National Geographic found that 41 percent of Americans think preparing for a catastrophe, such as stocking up on resources or building a bomb shelter, is a smarter investment than saving for retirement.

“Some people are worried about solar flares taking out the power grid,” Hall said. “Some are worried about a dirty bomb or a pandemic, but it doesn’t matter what your threat scenario or ranking is, what matters is that this is a one-size-fits-all solution. ... Having a survival facility is certainly in vogue.”

Dirty bombs and pandemics are just some of the disasters Hall has considered in building his Survival Condo, where owners should, in theory, be able to enjoy a full-size swimming pool, 3,000 movies and freshly baked brownies as doomsday rages outside.

“If you’re designed to withstand a nuclear explosion, you already get a lot of the other threats you can keep out,” Hall said. “You get protection from things like meteors, comets, tornadoes, hurricanes, solar flares, civil unrest, global climate change, earthquakes, tsunamis ...”

Hall, who lives in Denver, has a background in technology, communication systems and database design.

When 9/11 happened, he first began to think of a way to turn former missile silos into data centers. Later, the idea transformed into a bunker for Hall and his family. When he realized how expensive that would be, he decided to spread the cost over multiple units.

The silo descends 15 floors underground. The 14th floor, which contains a movie theater and a bar and lounge, is 190 feet underground.

The depth is not the only security measure.

The facility has a volcanic ash scrubber, nuclear biological and chemical air filtration and five sources of power ranging from a wind turbine to generators, Hall said.

The facility was built to withstand a nuclear blast, so it should have no problem with an F5 tornado, Hall said.

And if anyone attacks? The outdoor guards are expected to head home to their families in the event of a disaster, but there is a remote-controlled sniper post at the top of a dome built above the silo. To get inside, someone would have to shoot through feet of dirt, insulation and layers of steel and concrete.

Inside, three armories are packed with everything from sniper rifles to military grade pepper sprays. The “big stuff” is kept in four locked safes inside each armory, Hall said. There are also bulletproof vests, helmets, tactical gear, shotguns and more.

Other parts of the facility are less video game and more function or luxury.

One full-floor unit has a large fireplace, a television and hardwood floors. A bedroom has a walk-in closet. Some have bedrooms set up for children, with bunk beds and built-in desks.

The owners occasionally use the facility as a vacation home, Hall said, visiting for fall colors or to get away from city life.

Some units have personal photos on the walls or items tucked away in the closets. Fake windows can stream live, high-definition camera feeds from the outdoors, showing the wind blowing on the Kansas plains. One resident had her window screens changed to live video of different seasons looking over Central Park in New York City, complete with audio.

Psychologically, you don’t feel isolated. For all practical purposes, you couldn’t feel if you were on the surface or if you were 100 feet underground.

“You can see the activity, you can see the wind turbines in the background on the hill,” Hall said. “Psychologically, you don’t feel isolated. For all practical purposes, you couldn’t feel if you were on the surface or if you were 100 feet underground.”

Amenities include a swimming pool, kept at 82 degrees and surrounded by a mural with a tiger, parrots, a toucan and palm trees.

Workout facilities include men’s and women’s locker rooms with saunas and steam rooms. A library has a wall of bookshelves and comfortable chairs.

“The overall scope of the project was to create a wow experience for the homeowners so if they ended up in the facility for an extended period of time, that they would have access to all the comforts that they are typically used to in the home,” said Bill Craig, vice president of business development, in a YouTube video.

A pet park, climbing wall, air hockey and other amenities are also available to keep people occupied during a lockdown.

Residents can bring cats and dogs — 75 pounds or less, and only two. If an owner has three pets, then one will have to draw the “short straw,” Hall said.

Plans are ready in case a disaster should arise.

Once there, adults would have to work four hours each day, alternating jobs each month. Someone might teach elementary school one month, then work on hydroponics the next month, then security, then maintenance.

Children would go to school four hours a day in a classroom equipped with iMacs and educational films.

There are employees who live full-time in efficiency apartments in the silo, although Hall said their number is “classified.” They work in security, maintenance and aquaponics.

One of the owners is a medical doctor. Another is a dentist, and part of the facility is equipped as a “sickbay.” Hall has plans to fill one room with prescriptions for each resident, although that hasn’t been completed.

There are laws of society while living under lockdown, dictated by a board of directors. Owners have a representative vote: Those who own a full floor have twice the vote of half-floor owners.

There’s also a jail cell, which Hall calls “adult time out.” There are always at least two people working security, he said.

The lowest floor of the silo includes one of several storage areas, equipped with a walk-in freezer, a late addition by one of the owners.

If owners want to stash steak, ham, orange juice or enough frozen turkeys for five doomsday Thanksgivings, they’ll have space to do so in the freezer, Hall said. Right now the freezer is empty.

The freezer isn’t the only place still in the works. In the two aquaponics rooms, where tilapia are to be raised and vegetables and fruits grown without soil, the large green containers sit empty.

That’s not to say all is lost if a pandemic breaks out or society collapses tomorrow. Hall said the facility has enough freeze-dried and canned food to last each resident for five years.

Other supplies are also in stock, including five years worth of toilet paper, Hall said.

The facility has underground tanks to store 75,000 gallons of water, but also a reverse osmosis water filtration system.

All of the food, water and electricity needed under lockdown — not to mention access to the movies, music, books and leisure amenities — is included in the initial cost of the condo and monthly dues.

In the event of a disaster, they wouldn’t have to pay while under lockdown, Hall said. Afterward, if society survived, they would pay Hall whatever had accrued.

And if nothing of society were left to pay Hall back?

“At least you’re alive and well,” he says.