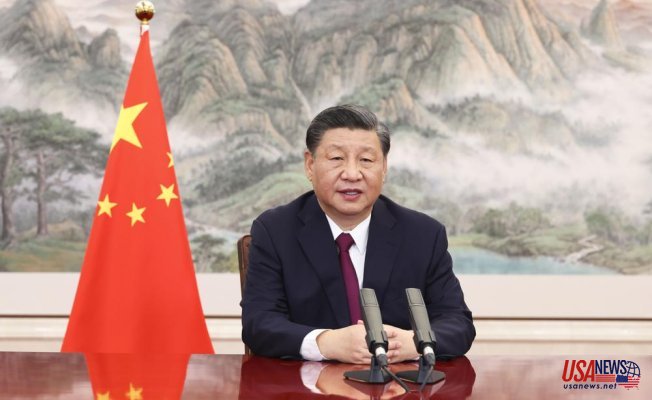 Xi's comments confirm that China will not criticize Russia for its invasion of Ukraine despite it's impact on the Ukrainian population as well as global security.

Beijing refused to label the conflict an invasion and claimed that Russia was provoked through NATO's expansion.

Xi stated that China is committed to respecting sovereignty and territorial integrity of all nations and non-interference with their internal affairs.

"We remain committed to peacefully resolving disputes and differences between countries through consultation and dialogue, support all efforts conducive for the peaceful settlement of crises," Xi stated in a televised speech to an international forum in Hainan, a southern island province.

Xi met Putin in Beijing just a month prior to Russia's February 24th invasion. The two sides issued a joint statement affirming their "no limitations" relationship.

China continues to support Moscow, despite war crimes being committed by Russian troops. It also claims that it maintains normal economic relations between the two countries despite economic sanctions from other countries.

China is also thought to be studying the Ukraine crisis to see how it may affect its policy towards Taiwan, the self-governing island democracy that it threatens to invade to take it under its control. China claims Taiwan as its territory, despite the fact that Taiwan and China were divided in 1949 during a civil conflict.

On Wednesday, U.S. Defense secretary Lloyd Austin spoke with his Chinese counterpart. This was the first meeting since he became Pentagon chief over a year ago. It broke a communication impasse that American officials considered increasingly dangerous.

Austin, who considers China the U.S. military’s greatest long-term threat, but has been forced into a heavy focus on Russia this year. He requested a telephone conversation with Gen. Wei Fenghe following months of unsuccessful attempts to speak with Gen. Xu Qiliang (the highest ranking uniformed officer within the Communist Party military structure).

A spokesperson for the Foreign Ministry, Wang Wenbin, stated that China has always opposed unilateral sanctions and long arm jurisdictions. These are illegal under international law and not authorized by (United Nations Security Council).

Wang stated that sanctions are not the best way to end tensions, stop wars, or prevent casualties. They will only exacerbate conflicts and increase spillover, making the world pay more.