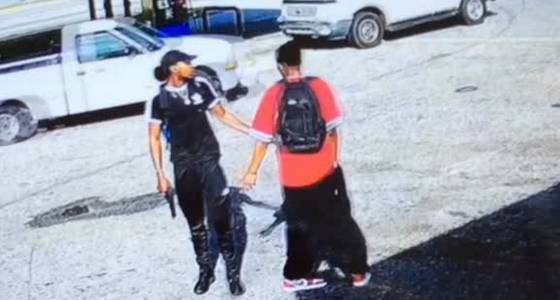 A surveillance camera mounted on the front of USA Grocery caught video of Thursday’s fatal confrontation that killed Kareem Mano.

The video shows Thomas getting out of a white sedan, and he appears to hand off something to Mano in the parking lot of the store at Bloomfield and Rocky Creek roads about 3:20 p.m.

Mano, 25, is seen walking up to the car, with his back to the camera, then puts something in his pants pocket and zips it up.

The sheriff said the men argued about a cellphone Thomas allegedly sold the sister of Mano’s girlfriend, according to a deputy’s report.

The girlfriend told police the phone was locked, and her sister wanted her money back when Thomas allegedly fired a gun into the air and yelled, “it’s jugg season b----,” possibly a street reference to stealing.

Mano allegedly told the woman: “Don’t worry about it. I’ll handle it.”

The men agreed to meet at the store, which is across the street from Rocky Creek Foods and a Nu-Way.

Mano and another man, later identified as Thomas, talked for about two minutes before Mano pulled a large gun out of his pants, according to surveillance footage. An incident report identified the gun as a TEC-9 semiautomatic pistol.

Mano slipped it back in his waistband, and the two talked for a little while longer before Thomas pulled out a gun and started shooting.

The graphic video shows Mano running away before collapsing behind a white SUV near some gas pumps, still holding his gun.

At the time of the shooting, Thomas was free on a $65,000 bond pending a trial in connection with a robbery last April.

Thomas and another man had been charged with armed robbery, false imprisonment and carrying weapons on school grounds in a stickup at student apartments on Mercer University’s campus, according to Telegraph archives.