Robert Malley is the new special Envoy of the United States to Iran. Appointed yesterday, has wasted no time: he immediately contacted the british colleagues, t 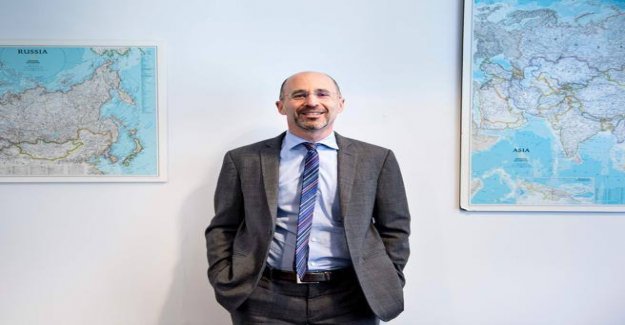 Robert Malley is the new special Envoy of the United States to Iran. Appointed yesterday, has wasted no time: he immediately contacted the british colleagues, the French and the germans engaged on the dossier of iran, the evidence that the resumption of dialogue with the Islamic Republic after four years of Donald Trump is a priority of the Biden Administration.
her nomination - that doesn't need the approval of the Senate, was opposed by the "hawks" who fear that the return of the agreement signed with Iran in 2015 and is abandoned by the Trump harm the security of Israel and the Gulf Countries, but two hundred people and a number of associations, including diplomats, academics, former hostages and political prisoners in american - supported'malley with a letter which underline his balance and experience. He was an adviser on the Middle East for president Obama, and among the architects of the agreement on nuclear power by 2015 (Jcpoa), while under Bill Clinton, was part of the team of the Camp David agreements of 2000. Over the years Trump has directed the think tank International Crisis Group in Washington. With the new secretary of State Antony Blinken with a friendship that started as high school classmates at the École Jeannine Manuel of Paris. 'malley spoke on the phone to the Courier prior to his appointment.

What is the JCPOA: the agreement on the nuclear of 6 points

The meeting in the desert and the robot killer: the assassination of iranian nuclear scientist

Range of ista to the Foreign minister of iran Zarif: "Iran will not deal with Trump"

The killing of iranian nuclear scientist Mohsen Fakhrizadeh last November aimed to make it more difficult to return to the Jcpoa? He achieved this purpose?
"There were a lot of goals in the killing of Fakhrizadeh. One was simply to hit physically in Iran and send a message to others in the region. Another was to make more difficult the task of a president Biden. And perhaps it was also to try to provoke Iran, to see if the situation is complicated further. If it was Israel - and we don't know - it was a good target from a symbolic point of view to inflict a blow to Iran and it was possible to do it without consequences because Trump was still president. But the killing of the scientist has not changed for anything in the position of Biden nor that of Iran on the Jcpoa. Biden has always said, before and after, that the United States are ready to go back to the agreement, if Iran comes back to respect. Tehran has said the same thing. The calculation does not change. The reason that killing can make things more complicated is that, from the side of iran, there will be clearly a greater anger that adds to the frustration for the situation of the past few years, which may make it more difficult and hard to their demands to return to comply with the agreement, in this sense, it could have a ripple effect. But it is also possible that the decision to avoid retaliating against the us or against Israel was the result of the computation is essential that the position of the two parts is not changed. It is still in the interest of the United States to curb the nuclear capability of Iran, and is in the interest of Iran to obtain a reduction of sanctions by the United States. For this reason, the return to the Jcpoa it is possible, although complicated".

Even in the democratic party, however, there are those who endorse at least part of the strategy trumpiana of the "maximum pressure" and calls for a broader agreement, which includes ballistic missiles, timing differences, the regional influences... Iran has often repeated that it will not accept new negotiations.
"Biden has been very clear: he wants to return to Jcpoa. No mention of a broader agreement if you do not after that the parts will be returned to the respect of the Jcpoa and you will be reconciled: so, there could be new negotiations".

In June will expire the second term of the iranian president Hassan Rouhani. The conservatives could win the presidency: this can interfere with the dialogue?
"Clearly, the dialogue has been more difficult during the presidency of Ahmadinejad and that of Rouhani, but in the end the decision-making process in Iran is more selective and the Supreme leader has a dominant role. Therefore, even if things might be more difficult, I do not think that, if you do not reach an agreement before the iranian election, is over. I hope that you can achieve the first, I hope that the two parties can reach an agreement, but even if the supporters of a tougher line to win the elections, the decision to engage with the United States will depend on the Supreme Guide, and others, will not be determined simply by who sits in the office of the president".

There is, however, who question if the same Supreme Guide Ali Khamenei will now follow an approach that is more conservative.
"If the Supreme leader was against dialogue with the United States, there would be no dialogue, even with a president who is more reformist or pragmatic. If he doesn't want, not going to happen. But if you want to, you can expect that to happen even with a president who is more conservative".

how it changed the Middle East in the last 4 years and how it will change the foreign policy with Biden?
"a Lot has changed in these four years, because of the policy of Trump, but also changes independent from it. With Trump Iran has become the focus of american foreign policy with respect to the conflict between Israel and the palestinians, and there has been a lot of attention to democracy in the region, nor to attempt to resolve the conflicts in Yemen and Libya. But there are also the changes occurred independently of the United States, as the acceleration in the partnership between the Countries united in the opposition to Iran, and a second wave of protest movements in Lebanon, Iraq, Algeria, Sudan. I think that the Biden Administration will try to recalibrate some policies: will put an end to the campaign of "maximum pressure" against the Iran in the belief that it is more effective to apply pressure through diplomacy. There will be a bit more of attention to human rights, less cheques in white with some traditional partners of America, and of course, more cooperation with Europe, because it shares the vision of the Middle East Biden much more than they did with the Administration Trump".

And Afghanistan?
"Before becoming president Biden said he wanted to put an end to endless wars like in Iraq and Afghanistan. He also said that he wants to keep a force of intervention for humanitarian reasons. But inherits an agreement between the Us and the Taliban, and will have to find a difficult balance between three factors: its commitment to put an end to the war, together with a long-term presence, or, as a minimum, to the promotion of humanitarian goals in Afghanistan. This would require a revision of the third element, that is the agreement with the taliban, but it could also lead to the loss of the opportunity to withdraw the american troops from the Country if the taliban is able to react renege on their commitments and put an end to the talks. A difficult equilibrium"