UPDATE: I should preface this post by noting that this was a very old dome sealed with a coat of paint, and that many dome builders have pointed out that dome building practices have improved significantly. Perhaps the title should read "Don't build it... 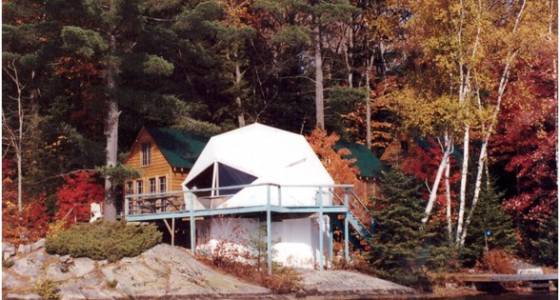 UPDATE: I should preface this post by noting that this was a very old dome sealed with a coat of paint, and that many dome builders have pointed out that dome building practices have improved significantly. Perhaps the title should read "Don't build it like this."

Urban planning consultant Eric McAfee sees a geodesic dome home in North Dakota and wonders, What undid all those domes? I might be able to answer the question, having owned a dome for a number of years on Shoe Lake in Muskoka, Ontario.

My dome was built by an engineer who was impressed with the big American Pavilion at Expo ’67 in Montreal. It was amazing bit of engineering; every triangle was made in his garage outside of Toronto, a sandwich panel of plywood and fibreglass insulation with perfectly bevelled edges so that it could be bolted together on site, probably in 1969. It was then sealed with a coat of some kind of special paint. There were no zoning bylaws then so he put it right on the edge of the water on one of the most prominent points on the lake; now the bylaws say that buildings have to be 66 feet back so nobody really sees them. It stood eight feet above the rocks with a big deck.

I fell upon it by accident while working as an architect in the area. I was able to buy the property in the middle of a real estate boom for almost no money at all because everybody looked at it and just laughed. But I had always loved Fuller and domes and had to have it.

After closing the deal I took the family up for our first visit, and was carrying my 8 month old daughter Emma in my left arm while I pulled on the door with my right. The door was a parallelogram, and leaned in rather than standing vertical like a regular door. As I pulled on it, the door came off its hinges and fell toward me and my daughter; I barely got my arm up in time to keep her from being bonked on the head with a very heavy, waterlogged door.

Lloyd Alter/ note water stains on walls, under windows, and 2x4 propping up peak between two windows/CC BY 2.0

Thus began our fifteen year experience with a geodesic dome. I replaced the rotted doorframe and rehung it, and re- caulked the big windows. We moved the furniture around inside depending on where it was leaking that day. We sat outside on the days when the sun was shining because we would boil inside. I repainted the exterior, put steel strapping around it to hold panels in place, kept moving the buckets.

Finally I added a cabin behind it that became the new kitchen and eating area (the wood building with metal roof to the left) and the dome became a living area only, until it got so rotten that for two years there was yellow danger tape blocking it off. I finally took it down and replaced it with a nice square building that only leaks a little bit.

Lloyd Kahn of Shelter Publications wrote two books about dome building in the early seventies and built many of them. He wrote many years later:

Metaphorically, our work on domes now appears to us to have been smart: mathematics, computers, new materials, plastics. Yet reevaluation of our actual building experiments, publications, and feedback from others leads us to emphasize that there continue to be many unsolved problems with dome homes. Difficulties in making the curved shapes livable, short lives of modern materials, and as-yet-unsolved detail and weatherproofing problems. We now realize that there will be no wondrous new solution to housing, that our work, though perhaps smart, was by no means wise.

He goes on to describe the waste of materials (cutting triangles out of rectangles), the problems with plastics, the impossibility of roofing them properly, the issues of wasted space.

I learned from my dome why we have roofs that are different materials than walls, why we have roof overhangs, why windows are vertical instead of sloped, why square is better than round. Useful lessons, and an interesting ride getting here.

But with every generation there is revived interest in geodesic domes and I only have one bit of advice: Don’t do it.