Screengrab by authorThe Falcon 9's first stage rocket booster returns for a smooth landing on a repurposed launch pad.A Dragon capsule full of supplies is on its way to the International Space Station, after a successful liftoff of the Falcon 9 rocket. The... 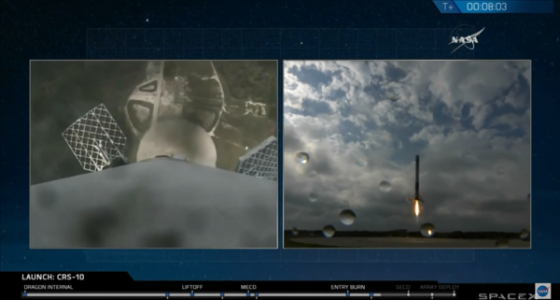 A Dragon capsule full of supplies is on its way to the International Space Station, after a successful liftoff of the Falcon 9 rocket. The first stage rocket booster then came back for a smooth landing--SpaceX's third touchdown on solid ground.

This was SpaceX's first takeoff from the historic Launch Pad 39A. Among the various venerated missions that have blasted off from these hallowed grounds are:

Apollo 4, the first uncrewed test flight of the Saturn V, the most powerful rocket that's ever flown

Apollo 8, which sent the first men into orbit around the moon

A little thing called Apollo 11, wherein Neil Armstrong and Buzz Aldrin became the first humans to walk on world that was not Earth

The first and final launches of the space shuttle, as well as many others in between

Now, the launch pad is starting to see a new kind of action. SpaceX's Falcon 9 rocket blasted off from 39A at 9:39am Eastern on Sunday, February 19. The launch was originally planned for takeoff on Saturday morning, but some slightly odd behavior in the thrust vector controls (basically, the steering) on the rocket's second stage caused a delay. It was the first commercially owned, non-NASA rocket to launch from the historic pad, and if all goes as planned, it will be the first of many.

The Dragon capsule is now in its way to the International Space Station, carrying 5,500 pounds of supplies. The cargo includes more than 250 science experiments, including: SAGE III, a device that will attach to the outside of the space station to measure gases in the atmosphere; Raven, which will test sensors and avionics that could one day help autonomous spacecraft rendezvous and dock with one another; and an experiment that will monitor how the antibiotic-resistant bacteria MRSA mutates in space, in hopes of predicting how the superbug may mutate on Earth in the future.

The Dragon capsule and its cargo is expected to reach the space station in two days.

SpaceX's first launch from Pad 39A was ushered in by the September 2016 fire that destroyed Launch Complex 40 while the Falcon 9 was being fueled.

Update: This post was updated on 2/18 at 10:10am Eastern with new information about the launch rescheduling, and again on 2/19 after the successful launch and landing.

Another view of the Falcon 9 on Launch Pad 39A.

SpaceX's Falcon 9 stands on Launch Pad 39A. It's the dawn of a new era for the platform that bid adieu to Apollo 11, the first and last space shuttle launches, and many other important NASA missions.