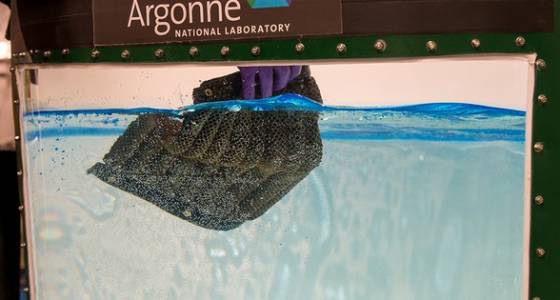 The Deepwater Horizon oil spill, the worst in U.S. history, taught us a a lot of lessons. We learned that deep water oil drilling required far more fail-safes than were being used and we also realized that deep water oil spills are far more complex than previous surface spills and leaks. Huge plumes of oil below the surface were hard or impossible to collect, especially since most of the oil clean up techniques we had focused on retrieval at the surface.

In the years since Deepwater Horizon, there have been numerous technologies invented that would make clean up of another large oil spill more effective. Now, researchers at Argonne National Laboratory have invented a material that may be the best and most revolutionary oil spill solution yet.

The scientists have invented a new foam material that acts like a sponge and absorbs oil from the water while repelling water. That's not the unique part. The sponge can be reused and is able to collect oil from the entire water column, not just the surface.

We've seen previous sponge materials that can pull the oil from the surface of the water, but this sponge is truly groundbreaking because of ability to pull oil from the depths of water as well. The material called the Oleo Sponge can be wrung out and the collected oil can be recovered. The sponge can then be re-submerged to collect more oil.

“The Oleo Sponge offers a set of possibilities that, as far as we know, are unprecedented,” said co-inventor Seth Darling, a scientist with Argonne’s Center for Nanoscale Materials and a fellow of the University of Chicago’s Institute for Molecular Engineering.

The sponge is made from a normal polyurethane foam but it's oil grabbing properties come from the application of oil-loving molecules to the surface. The material is primed with a thin layer of metal oxide on the surface which act as a grippy surface for the molecules. The oil-loving molecules cling to the sponge on one end and then pull in oil on the other.

In tests, the scientists filled a giant tank with seawater and diesel and crude oil and the Oleo sponge successfully absorbed the oils from both the surface and below. It was also able to be reused again and again without a decline in performance.

“The technique offers enormous flexibility, and can be adapted to other types of cleanup besides oil in seawater. You could attach a different molecule to grab any specific substance you need,” said Argonne chemist Jeff Elam.

One potential application beyond just major oil spill clean up is to use the material for regular cleaning of ports and harbors where diesel and oil accumulate over time from heavy ship activity. The team is currently looking to commercialize the material.

You can watch this amazing sponge in action below.